I've finally hit 100 posts!!! It's only taken me almost 4 years, but I've finally got there and I'm happy that I have. I would like to be able to say that it's been easy but as well know, finding the motivation to build, paint, photograph and then write about our models can be tricky.

On several occasions I've taken breaks as I really couldn't be bothered with the hobby, but I keep coming back and finding different things to do or try, such as the set back Chimera's or the magnetised and weathered Shadowsword. But in the end it's all worth it.

I'd also like to say a massive thank you to everyone that reads this blog, and puts up with my erratic posting and dry sense of humour. And to say thank you, I dusted off all my models (no seriously, they were very very dusty, some had cobwebs on!), lined them up in parade fashion and can now present you with the Cadian 127th Regiment, with attached armour and aerial support: 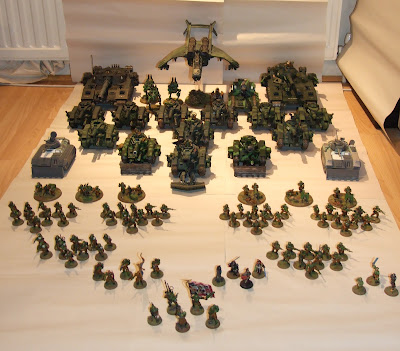 I apologise for the unpainted Chimera's, I haven't quite had the time to finish them off yet. I have put in links to the relevant post for certain units, if anyone wants to have a close up look of the models. 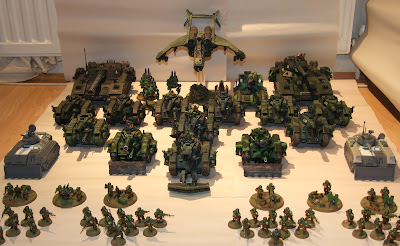 So there you have it. The current fighting strength of the 127th. I've cheated a little bit, as I've put a few tanks in that aren't finished yet, but never mind. Thanks for taking a look at this post, and thanks again for sticking with this blog over the past 99 posts.
Posted by Cadian 127th at 09:45

That's a very impressive army and you should be really proud of what you have achived. Well done mate and look forward to seeing what you add next.

Nice. TY for taking the trouble to put white paper down so we could see them; I'm all too aware that most of my photos are on the gaming table and therefore certainly loose a bit of clarity in the transfer to the blog.

Congrats on a milestone. 100 is something to be proud of.

@ Commissar Dave - thanks for the comment. Looking at it now I can say I'm quite happy with how the army has developed.

@ Zzzzzz - yeah most of my photos tend to be on my desk, but there wasn't enough space and the models were blending into the floor. Thanks for the comment.

I have to say I've absolutely loved following your stuff - it's been great to see the army grow so much, eh?

Here's to the next century...

@ Admiral Drax - thanks for the comment. It has been good watching it expand. Maybe I'll get the next century done in 3 years rather than 4. :)