Now that the Valkyrie is finished, I've got the tiem to finish off some scraps of projects that have been sitting around with only a few things left to be done. One of those projects is the three sentinels that I currently have. I did post some info about 2 of the sentinels a while ago here.

As with most of my projects all I had to do to finish the model off was apply a drybrush of Bleached Bone and seal it with matt varnish. So here are some pics of a scout (Cadian pattern) sentinel, callsign Red Angel 1. 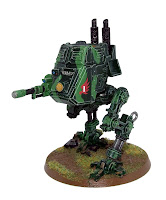 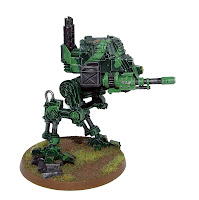 The sentinel was painted with a basecoat of Dark Angels Green. The camo pattern is Goblin Green. I wanted something different on the side of the sentinel, rather than the using the supplied back pack, so I went for a fuel can instead - something for people to aim for. After taking these pics I noticed that I haven't drilled out the autocannon barrel, so thats something else I'll do. 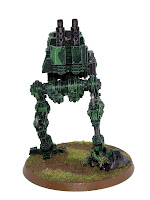 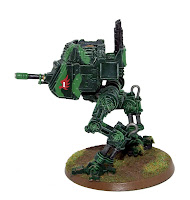 The Red Angel emblem was made using a transfer from the Imperial Guard Tank transfers sheet and then a number from the Forgeworld Imperial Guard sheet. The interior of the sentinel was painted before the model was put together.

I plan to post the other two sentinels in the next few days, so watch this space. Thanks for reading!
Posted by Cadian 127th at 17:42