Well I've finally managed to finish the mortar squad. Be prepared for an abundance of posts over the next couple of days - including a completed heavy bolter squad and several Sentinels.

I'll start this post off with a picture of all 3 of the mortars. 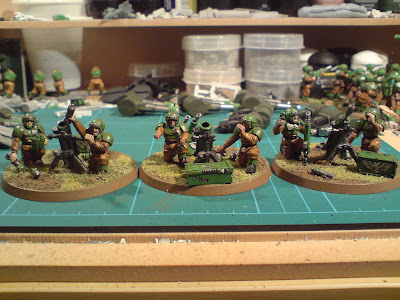 I'll start off by explaining the team on the right hand side of the above picture. Starting with a picture of the front of the team I've tried modelling one of the mortar rounds actually being fired. I think it looks ok, but may have been better if the round was further in the tube. This is the only picture of this team that partially shows my attempt at making skin look a bit better. The trooper on the left (as you look at the picture) has had a layer of Tallarn Flesh, followed by a Devlan Mud wash. Elf Flesh and then Rotting Flesh were then drybrushed onto the model. This was then finished off with a very light wash of Ogryn Flesh. 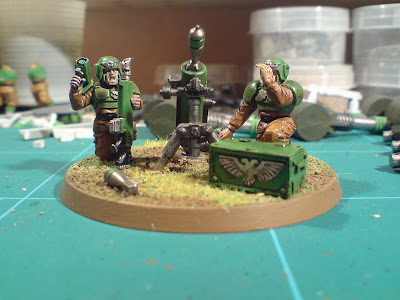 Next we have a picture of the side of the team, sort of showing the one handed sight I created. I used the sight from the heavy weapon sprue placed on top of the hand with trigger for the missile launcher. This was glued to the arm and shoulder that originally had a hand holding a laspistol from the Cadian sprue. 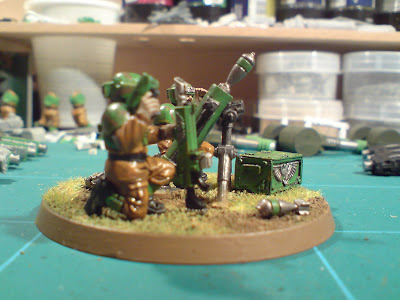 A shot showing the back of the models. Everything was given a wash of Devlan Mud. 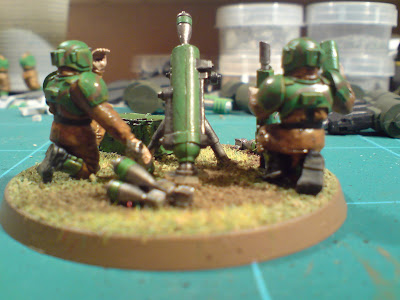 Finally for this team, here is a picture looking down on the team, showing the layout of the models on the base. 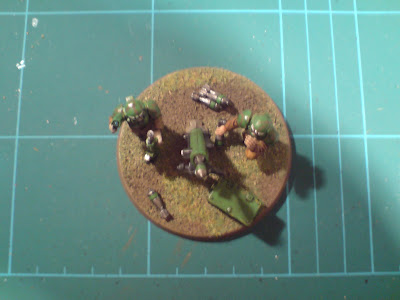 Ok onwards. Now to start on the second team, which is the one in the middle of the main picture. Here is a shot of the front of the team. 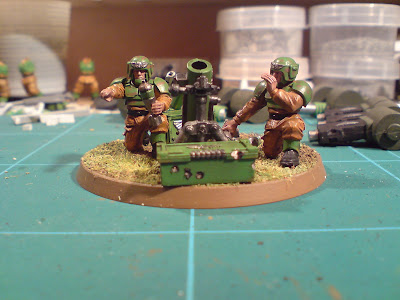 A picture of one side of the team. This picture shows the teams lasguns propped up against an ammunition crate while they bombard the Emperor's enemies from afar. 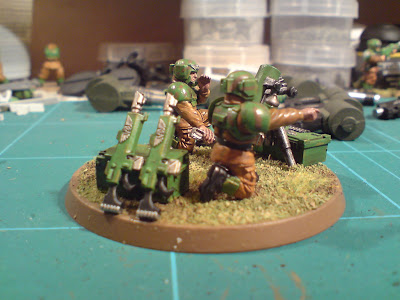 The back of the team, again showing the lasguns and aummunition waiting to be fired. 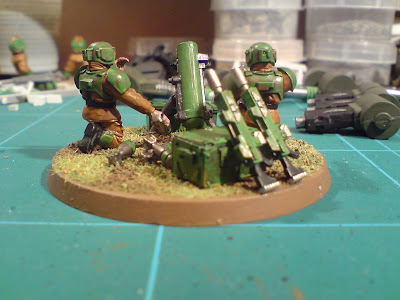 The other side of the team. The crate that the lasguns are leaning on is from ForgeWorld. 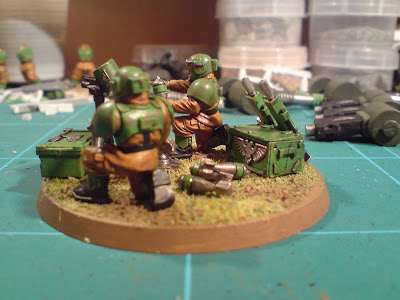 And last but not least for this team, a photo showing the layout on the base. Once again everything got a wash of Devlan Mud to "dirty" the models up a bit. 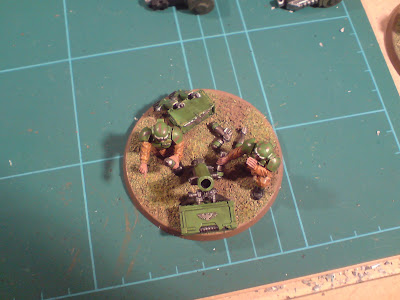 And here is the last team of the squad. I think that the two poses of the troopers work well together - with one really shouting things out and the other preparing additional rounds and spotting where previous rounds fell. 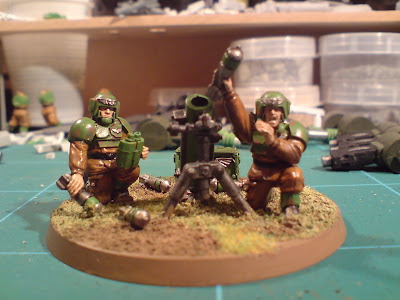 Here is a side shot showing the loader placing a round into the tube. 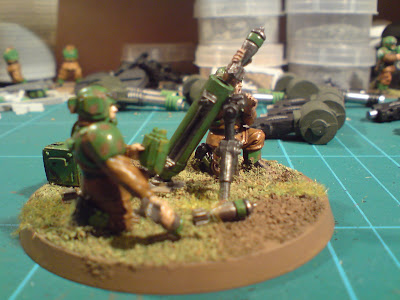 A quick shot of the back of the team - showing another ForgeWorld crate. As with the other teams this one was given a wash with Devlan Mud. Also I used Camo Green to highlight the Goblin Green sections of the models. 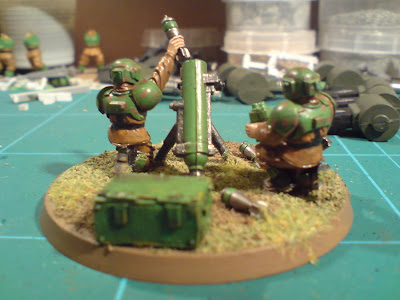 The other side of the team. These guys obviously aren't bothered where they keep their ammo lying as long as its within reach. 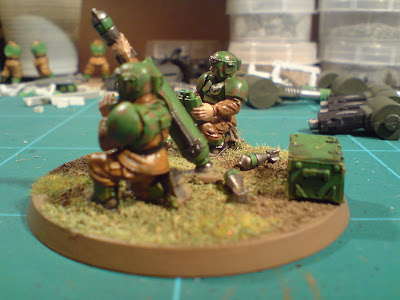 And the final picture of this post is of the team from above, once again showing the layout of the models. 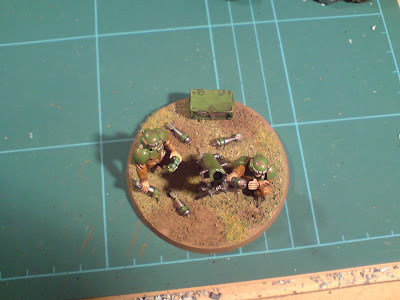 And there you have it. One Mortar Support squad finally completed. Think I need to work on my speed skills. Comments as always are appreciated.

Oh one final thing. Has anyone had any experience of using the GW Spray Gun? I was looking at getting one in order to quicken up my completion of some tank models etc, but wanted to find out if anyone has any good or bad experiences with it. Thanks.
Posted by Cadian 127th at 00:42

I really like those, the conversions look good. One thing I was thinking of when I saw the mortar that is supposed to be firing, you may want to try to model some smoke or similar onto the barrell to indicate the firing, nothing too heavy, but if you google image search mortars there is generally some exhaust when they are fired. The one being loaded looks great!

Very nice mate, really like the look of them. Congrats!

I love that hand-held sight! A great idea - I have one similar but held as a monocular rather than with the pistol grip. Genius!

Do they have to be on a base that big? Seems like they are going to take up some space on the old battlefield being that big.

And hey - if that's the case, then that's what GW are making us do now: take up the entire tabletop with big, unweildy bases that're too chunky to fit into Cities o' Death ruins.

You don't half notice the lack of space too, if you're fielding an all-inf army.

OOps - slap wrists! I shoudl've said 'encouraging' rather than 'making' just then.

yeah there is alot of spare room on those 60mm bases, i just built a mortar the other day and found that! The ammo cases are a great way of filling some of that space though. What do you think of the new releases? Iv done a blog about them so please offer your thoughts and comments on there!

Thanks for the comments everyone.

@ bG - I did think that it could do with some smoke, will look at using some cotton wool with a light drybrush of "smokey" colours over it.

Regarding the size of the bases, yes they are 60mm ones. Basically I couldn't be bothered to base the loader etc on separate ones so just went with the bases provided. Hopefully they will be ok in future games and won't be too unwieldy - hoping to get some Apocalypse gaming in soon :).

Thanks again for all your comments.