Any week (or two), and another tank for the Emperor's Fist tank company. 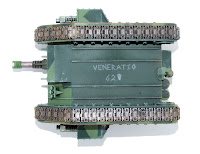 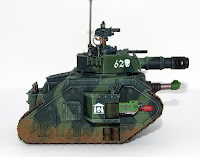 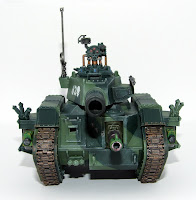 Being a command tank, I wanted there to be some defining feature. The comms aerial's are straight from the accessory sprue, but the turret device is not meant for the Guard. It has in fact been converted from the Apocalypse upgrade sprue, using the pieces for the Chaos vehicles. Whether the Emperor would approve is another question, but once I'd trimmed off the heretical markings and given it a fitting paint scheme, it fits quite well with the tank (and the melta-bolter combi weapon will come in handy!). 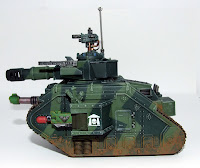 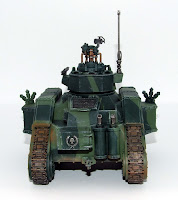 I decided not to try modelling "mud" again, as seen on the previous tank. I think I need some ready mix filler to give some bulk before I try again. Instead I stippled and drybrushed on Graveyard Earth and Calthan Brown, with a very light drybrush of Snakebite Leather to simulate muddy dust. The colour tone is slightly different to another of my tanks, but variety helps to add to realism, or at least that's what I'll say if anyone notices :-). 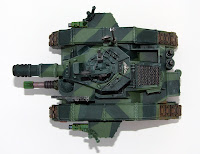 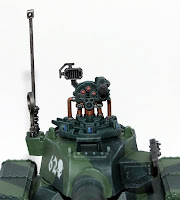 And to finish up, the arial view of the tank, and also a close up of the turret detail. I need to put another coat of gloss varnish on the lenses just to make them extra shiny. Thanks for reading.
Posted by Cadian 127th at 14:15

Looks nice, I think this works better with mostly clean vehicles like yours. If there was more weathering and more discoleration overall, the previous version with the sand added might look pretty good.

@ Spyrle - cheers for the comment, I'm trying to write some fluff as why they look so clean (and not just about me holding out on trying weathering powders)