I'll admit this at the beginning, but I thought that I had actually finished this tank. In fact it had been sitting on the shelf pretending to be finished. So I grabbed my drybrush and got to work.

So here is the company command tank - 601 "Imperator Furor" (Emperor's Fury). As with the rest of the tank company, the tank name and designation is painted on the underneath. 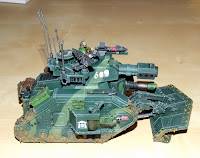 Above can be seen the right side and the front view of the tank. Having used a skull to represent the number 1, I wanted something different to show the number 0, so ended up digging out a different transfer from somewhere.

I added the comms upgrade from ForgeWorld and also the upgrade from the Apocalypse sprue to help make this tank stand out as the company commander. I also used the Hellhammer cannon from the Baneblade kit to turn the tank into an Eradicator variant. 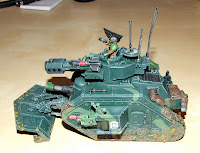 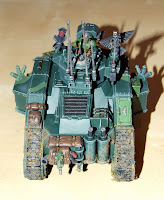 Onto the left side and the rear view of the tank. Trying to keep the tank looking used I added extra stowage, boxes and fuel cans. With "Imperator Furor" I had a go at modelling mud/grass onto the vehicle.

Using an old tupperware container, I added together water, PVA glue, sand and static grass. I mixed it all up with an old stiff brush and then spread the "mud" onto the tracks, armour panels and mine plough. Overall the result wasn't quite what I was after. I'm happy with the result, just might try doing it differently in the future, maybe adding some ready mix plaster to give some bulk, but never mind. Once the "mud" mix had dried I gave the lower area of the tank a heavy drybrush of Graveyard Earth. 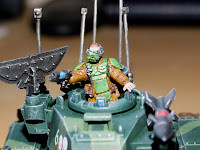 And finally a shot of the company commander, popping out to fire off a few shots at anyone his crew hasn't finished off.

Very nice overall. That dozerblade is killer! I would use more mud effects but that's just personal taste I guess.

@ The Antipope - I really like the ForgeWorld dozerblade, it's just a shame that their quality control sucks - I was sent 4 of the same smoke launchers so couldn't actually finish the piece correctly. Luckily their customer service is excellent and they sent me out the correct ones. so now I have spares