The original plan was for a battle between Tau and Orks against the forces of the Imperium - Space Marines and Guard. Instead it ended up being Space Marines versus an allegiance of Orks and Guard - including Commissar Yarrick and Ghazghkull Thraka on the same side.
I would be in command of the Guard contingent, with Neil in command of my Orky allies. Shaun would be in command of the Marines which consisted of Black Templars, Crimson Fists and Ultramarines - including some original assault marines. We used mainly 4th edition rules (I think), though needed the rules for ramming vehicles at one point. 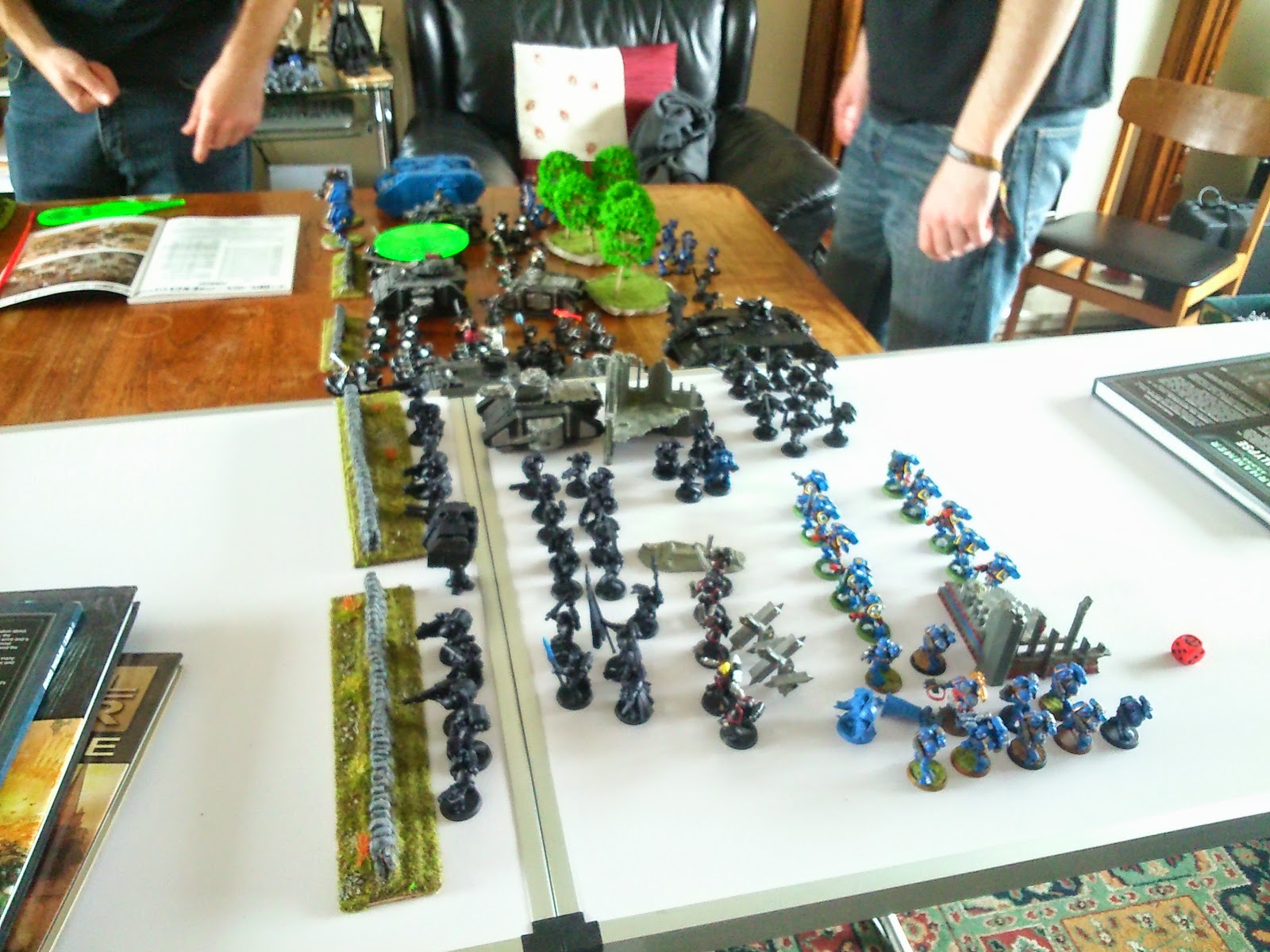 Here is the Space Marine deployment. The Crimson Fists focused their force closest to the camera, with the Templars in the middle and the Ultramarines holding the far side and a couple of squads nearest. Not in shot are several squads that started embarked in vehicles and 6 Terminator squads that awaited their orders in reserve. All in all around 8k points. 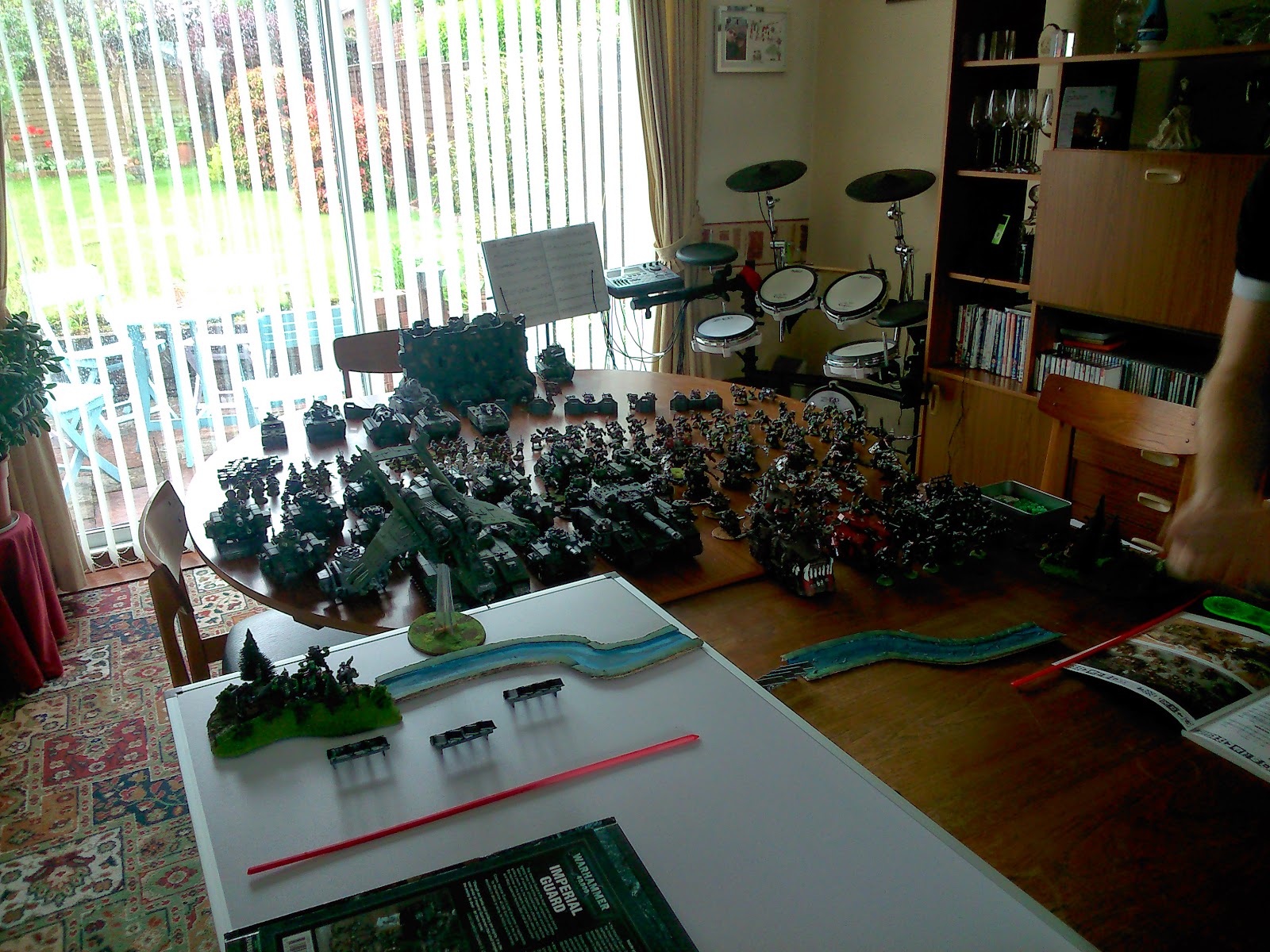 Massed against them was the green horde. Orks on the right, Guard on the left. And Creed commanding the forces from the big bastion at the back. Again about 8k in total. There were another 500 points worth of Guard that didn't make it to the table. 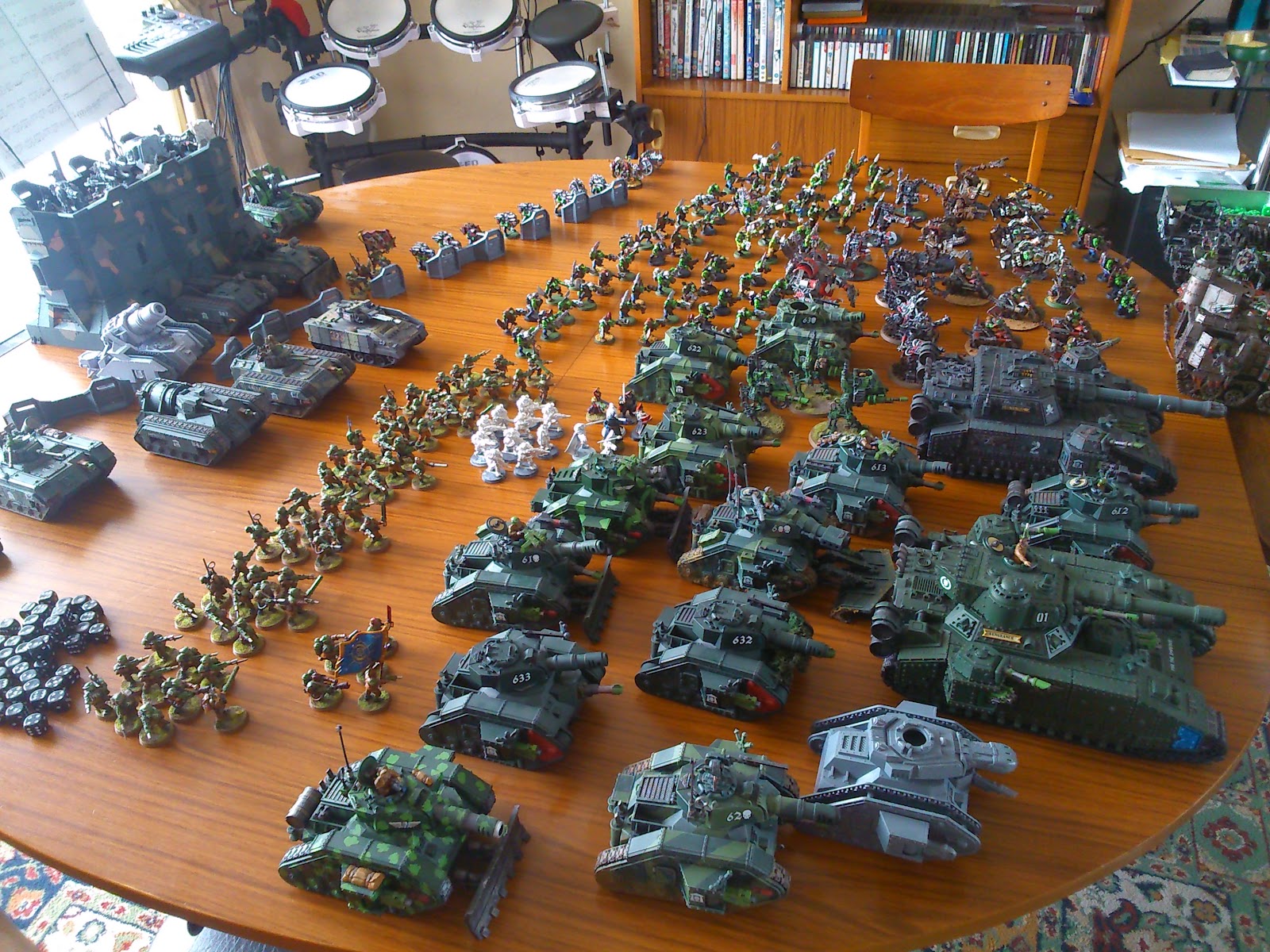 A bit of a better view of the allied forces after the first turn of movement. Which really only involved the Orks moving forward and the Guard sitting and prepping their guns. I apologise for my unpainted models - something I hope to rectify soon. 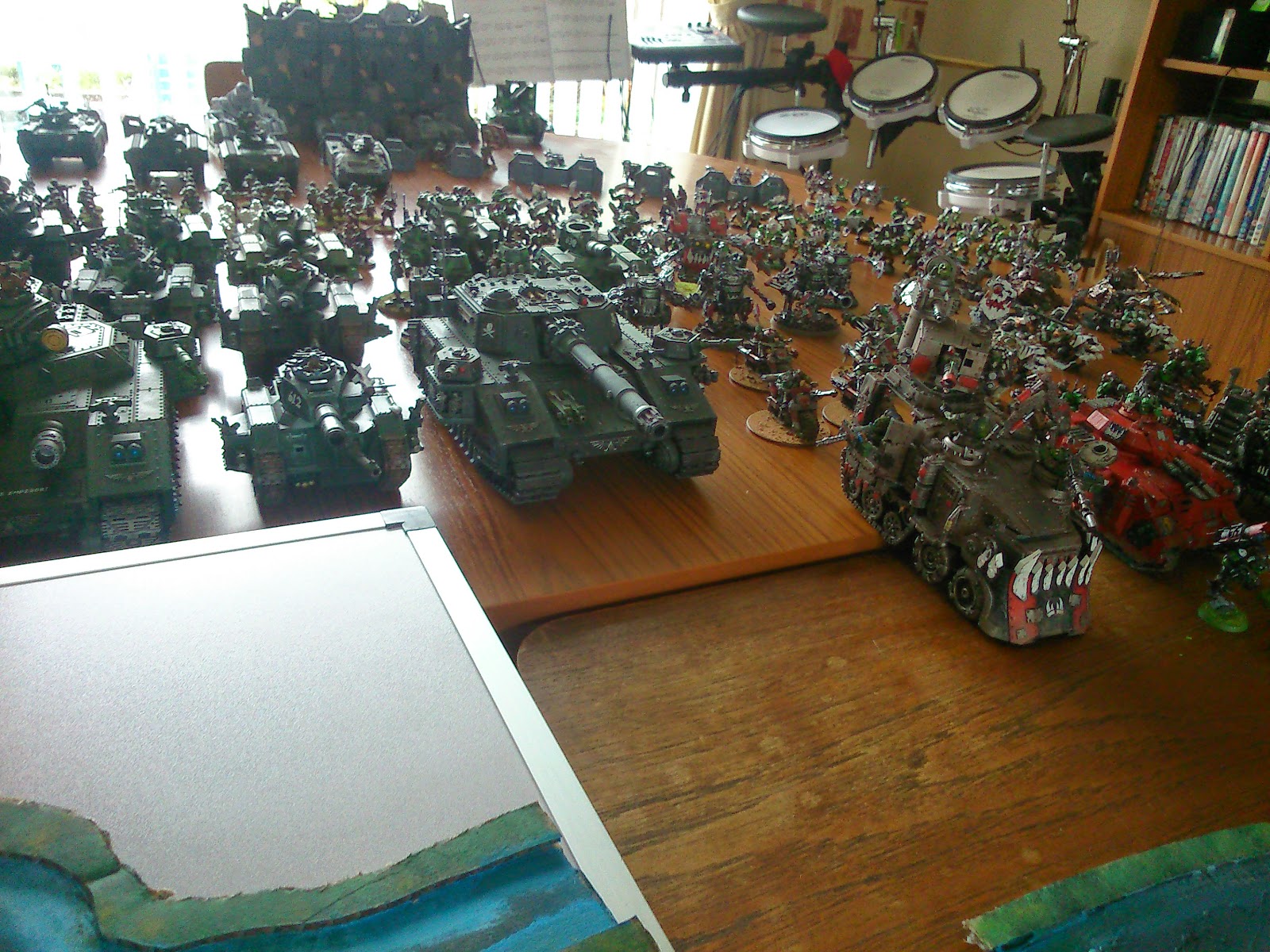 The centre of the Alliance. The Shadowsword getting ready to vaporise some Mahreen vehicles. 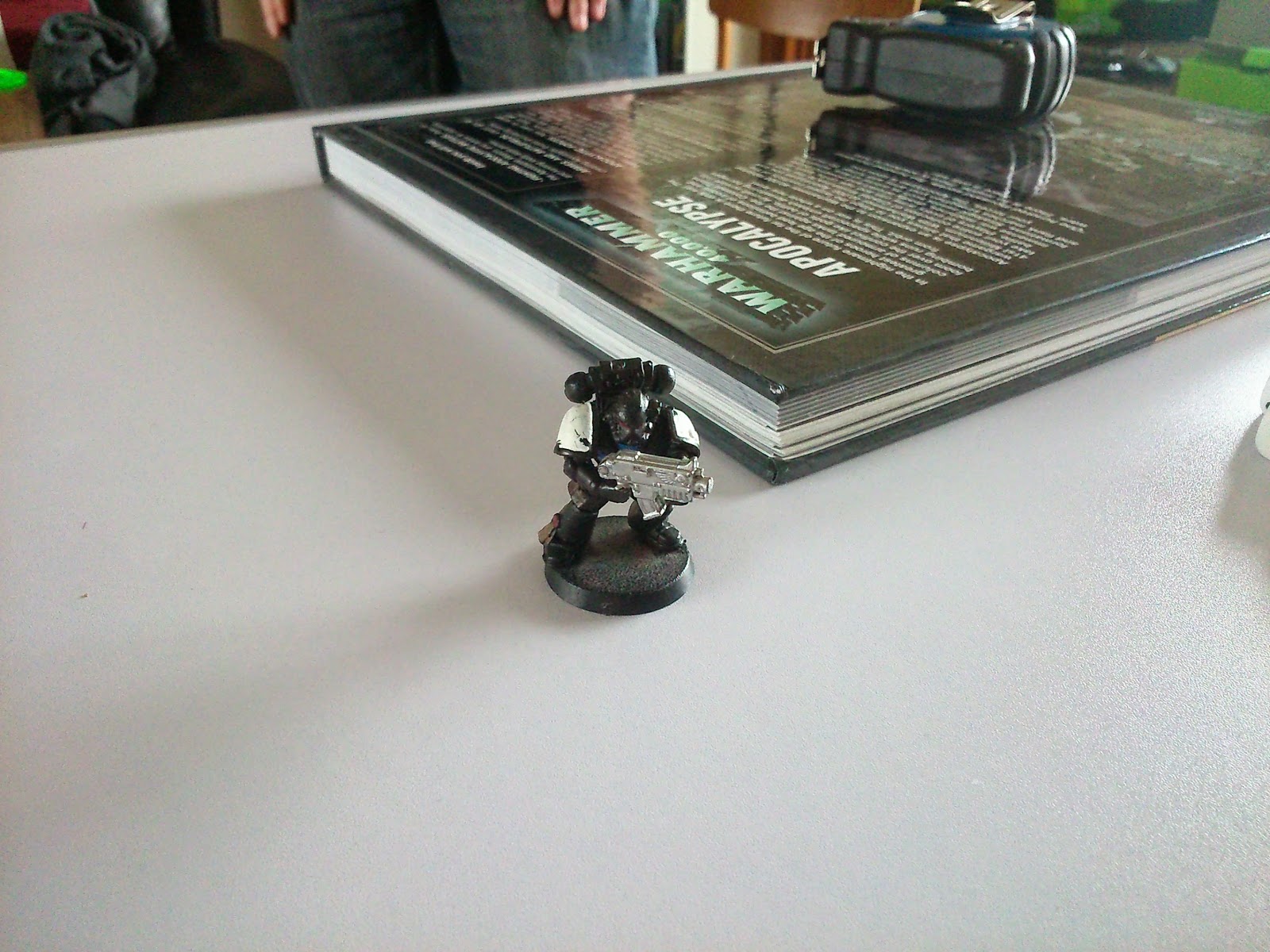 The first casualty of the day. And pretty much the only thing the Orks managed to kill in the first turn. The Guard tanks and artillery faired a bit better and claimed several vehicles and Marines. The Shadowsword failed miserably and only blew off a weapon on one of the Land Raiders. 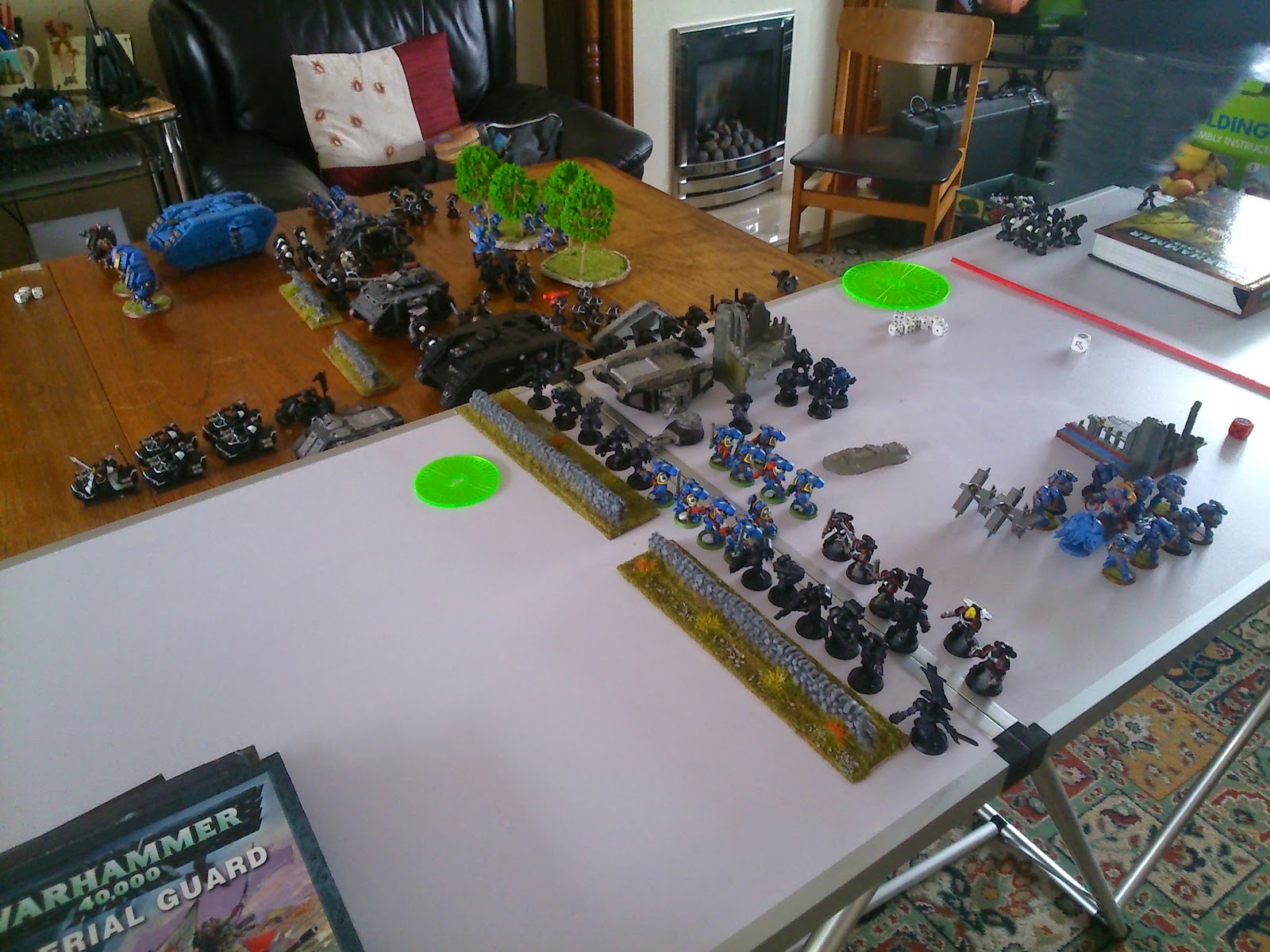 The Marines at the beginning of their first turn of shooting. 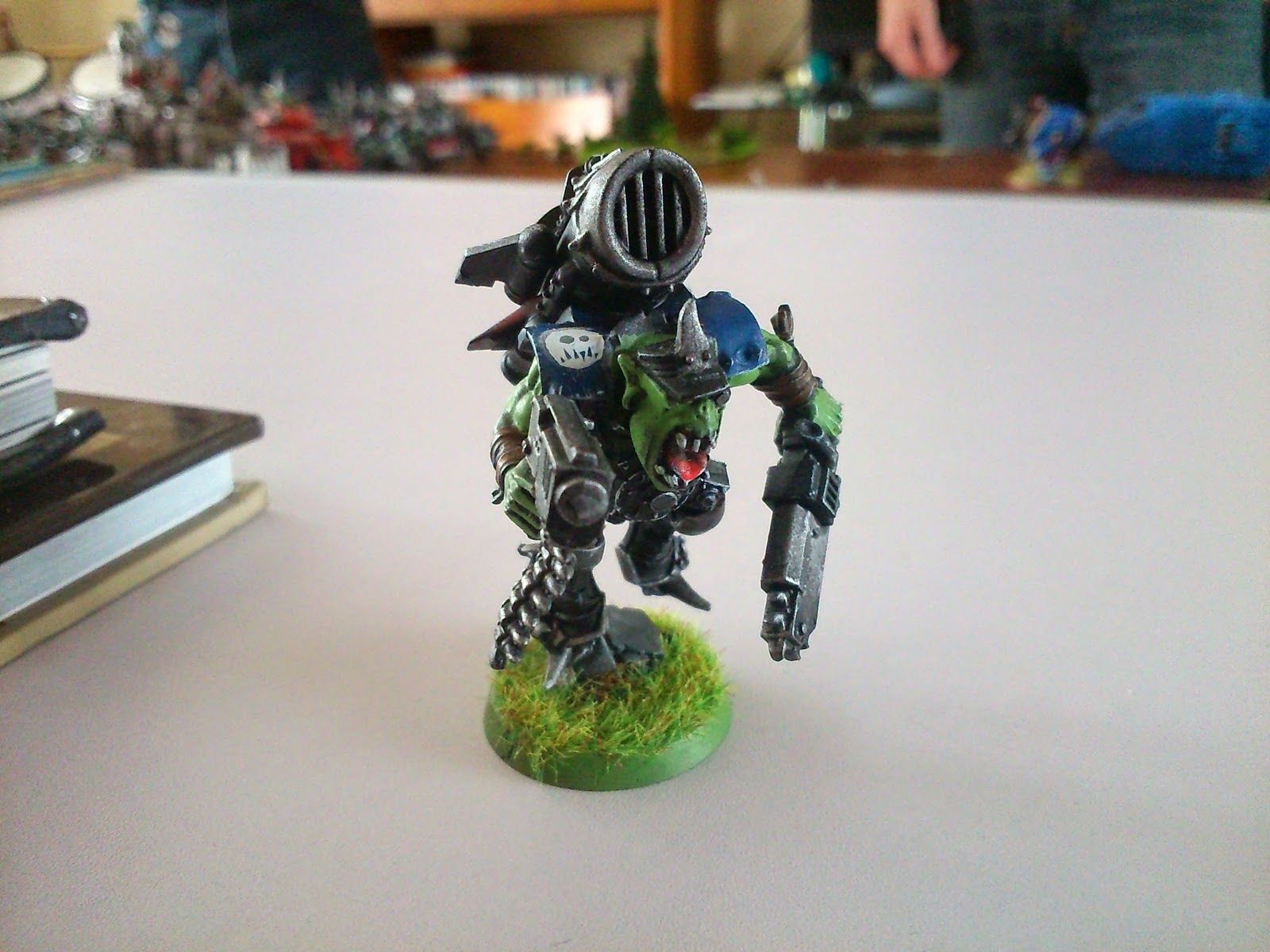 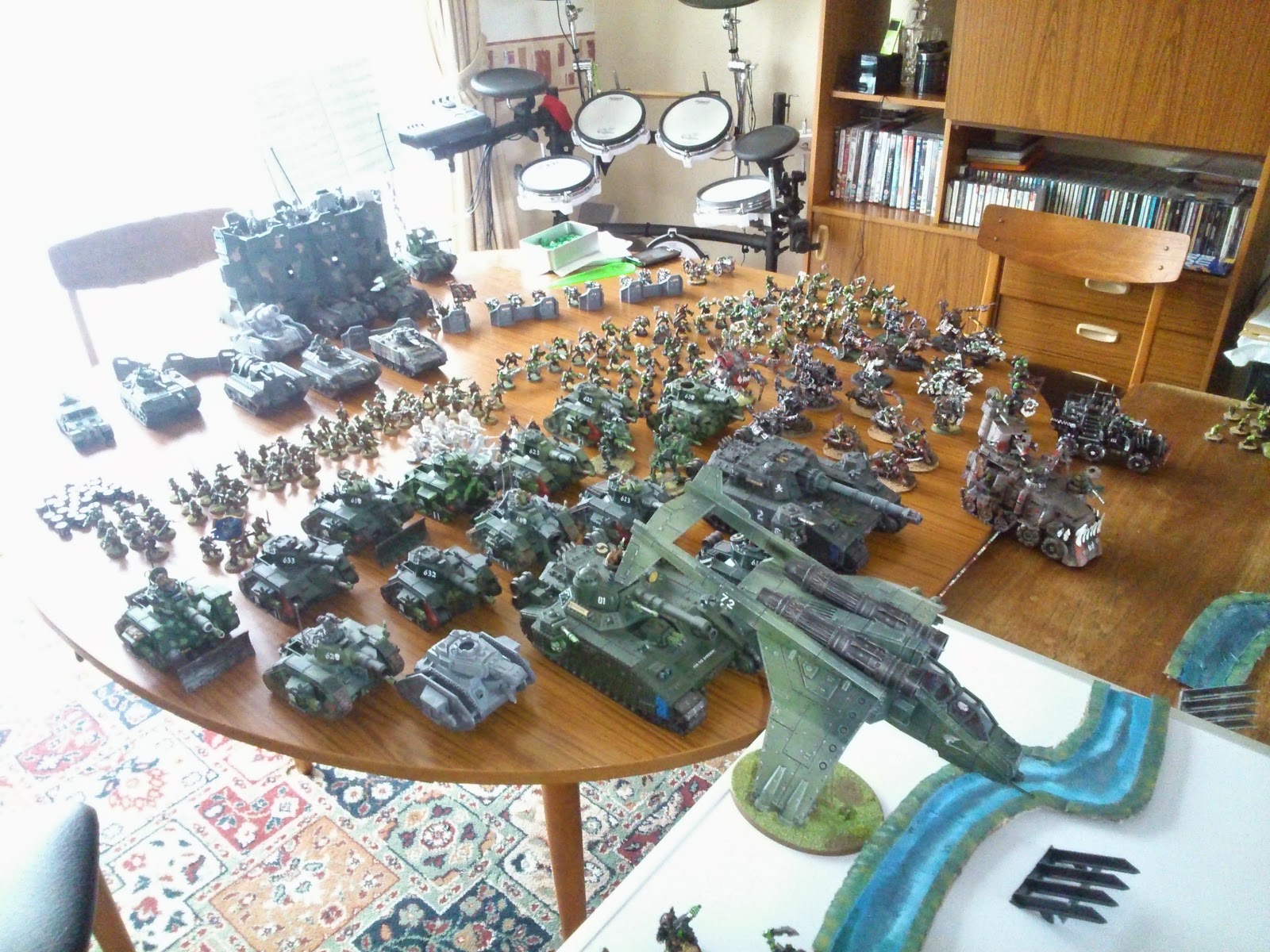 The Ork's continue to advance having suffered some vehicle losses. The Guard meanwhile stand still and fire again, with only the Valkyrie making any sort of attempt to get involved in the fight. 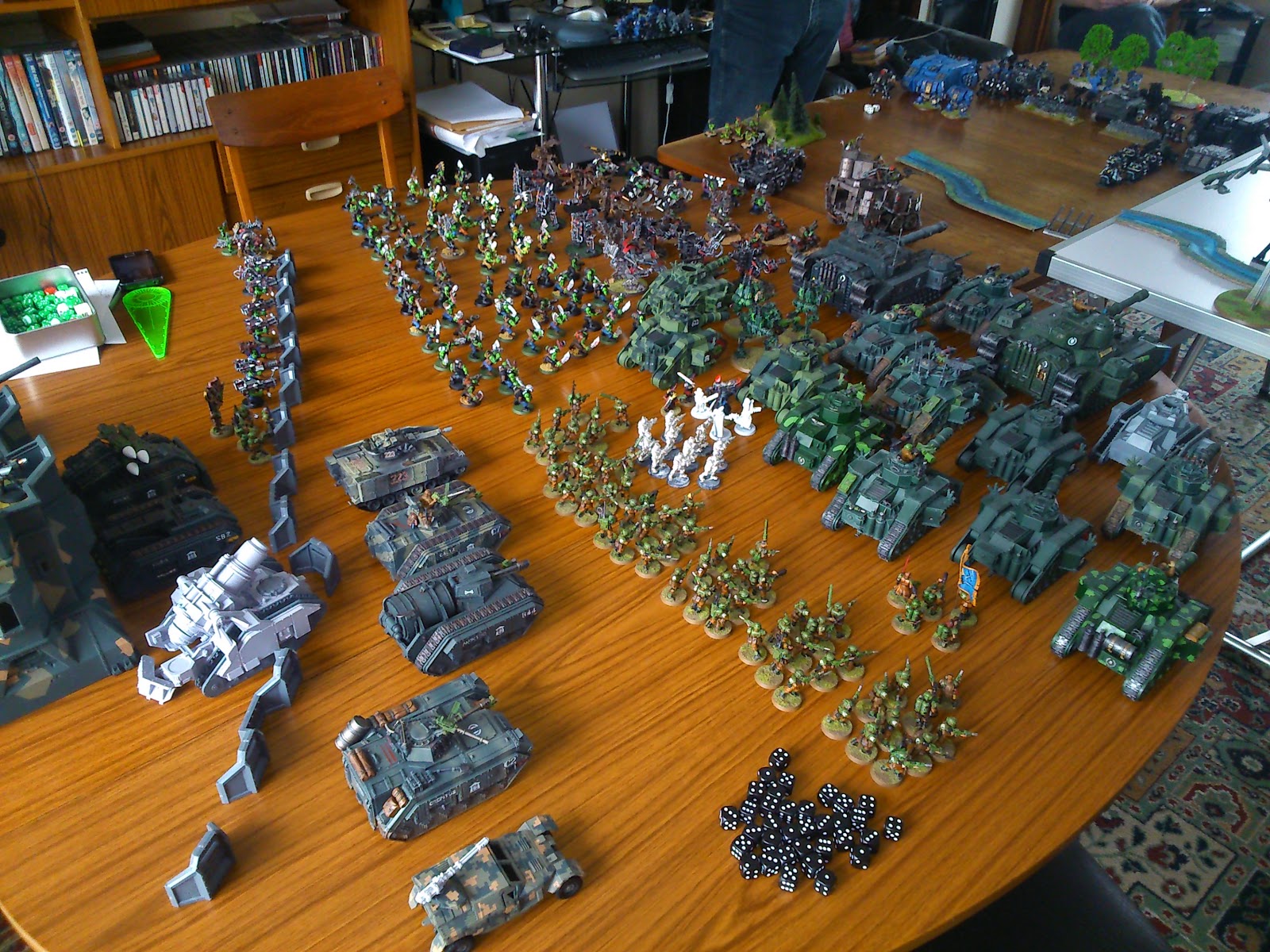 A nice handful of dice ready to bring some pain on the Templars. The nice meat shield of Guardsmen standing around and hiding behind the big guns. 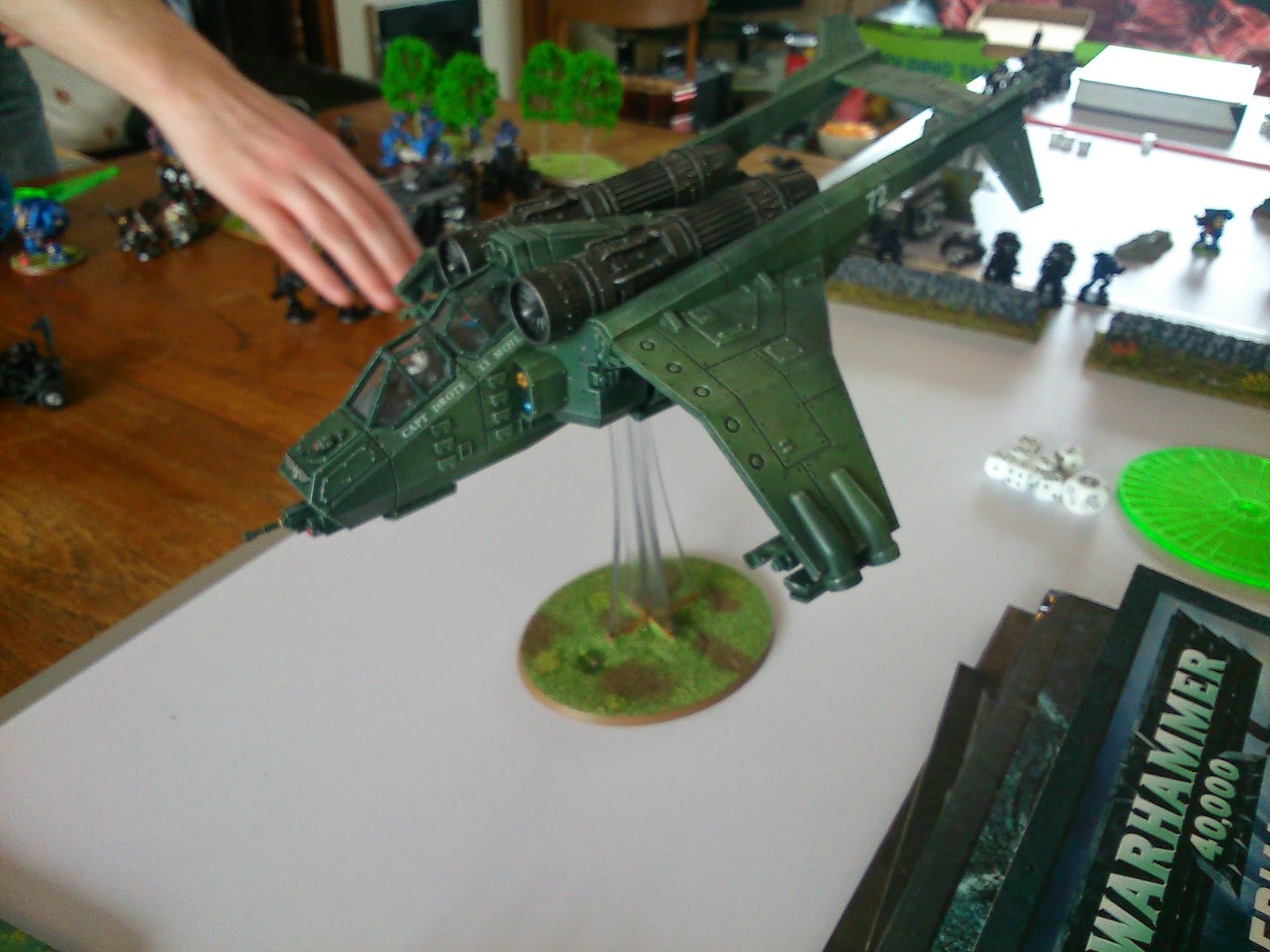 The first Guard casualty happened to be the hapless Valkyrie. It did account for a couple of kills, including a twin linked lascannon toting Predator that may have caused some problems. 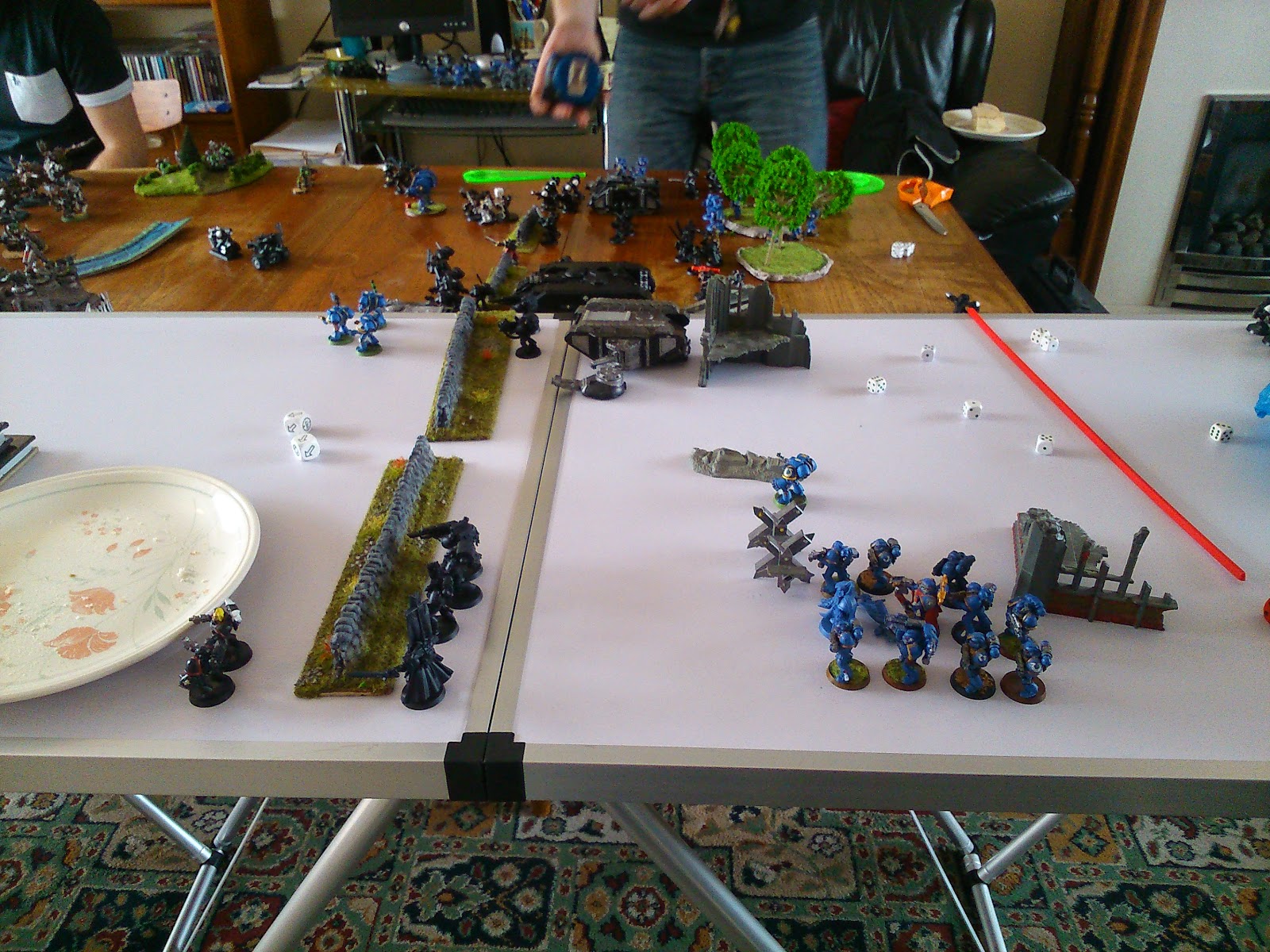 The thinning Marine line, with an extra plate for effect. The Shadowsword was a bit more effective and took out the other Land Raider and a Dreadnought. The Orks were still trying to get in to combat. 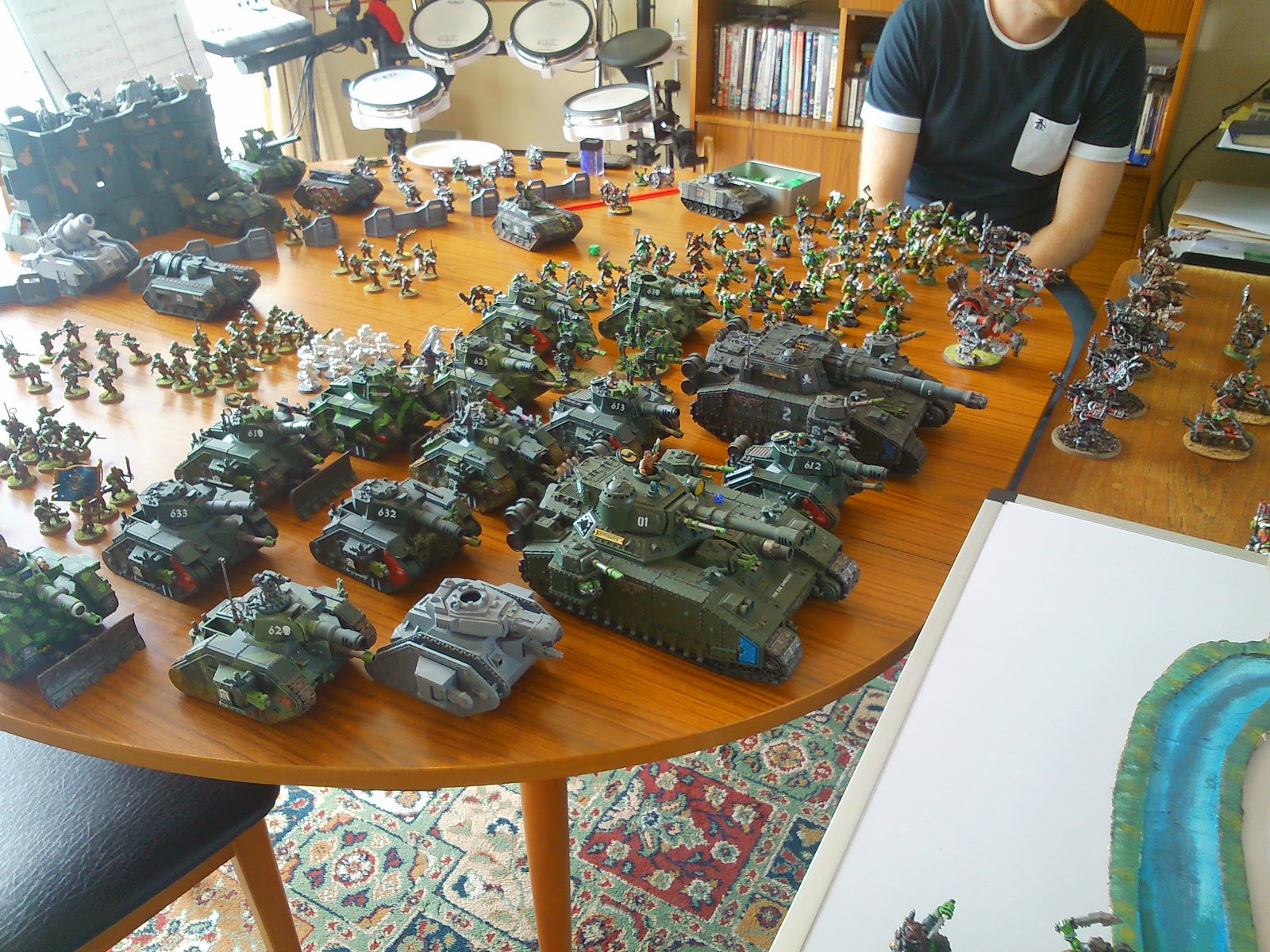 The Guard line is still looking strong having survived multiple lascannon and plasma cannon shots as well as being just out of range of some multi meltas. This was all to change when the Terminators turned up. Neil and I did attempt to block their deployment by spreading the squads out so there weren't any 6" gaps. It didn't work!

Unfortunately that is where the pictures end. The Termi's turned up in the gaps and proceeded to kill pretty all of the Ork Boyz, 2 Leman Russ', a Chimera and both the Shadowsword and Baneblade. The Baneblade went apocalyptic and took out some of the Termi's that had caused it's demise as well as some that had killed the Baneblade. In the final turn, the Leman Russ' redeployed to bring their guns to bear on the newly deployed foe.

Safe to say the Terminator's didn't last long. Those that were in combat were overwhelmed by the huge numbers of Guard and Orks that turned to face them. And the rest were just blown to bits.

The game ended after that turn, and I'm not sure if the Marines would have survived for much longer. Having the first turn really helped the Greens as we were able to destroy most of the weapons that could hurt us. Lots of blast weapons made short work of the guys in power armour.

Thanks for reading and I hope I've managed to convey roughly what happened.
Posted by Cadian 127th at 14:16