Once again my modelling plans get altered immensely. I foolishly decided that I should be able to finish a 5 man command squad on a couple of weeks at most. I was happy painting, and thought this should be a piece of cake. However, its been three weeks since I picked up a brush. One week was lost with a family holiday to Florida, so I'll let my self off for that week. But the past two weeks have been lost to housework, tidying up and Dragon Age 2. I'm finding it difficult to divide my time evenly between computer games and painting. With today being a day off work though, I'm going to try picking up a brush again.

In the mean time I shall post some pictures of my remaining finished sentinel. Unlike the previous two sentinels, this one is armoured and armed with a lascannon. The model is the Armageddon Steel Legion Sentinel, with the metal extra armour. So here are the pics of Red Angel 4: 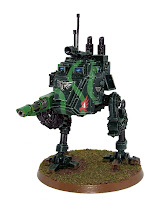 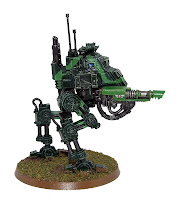 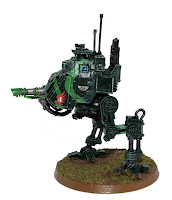 This model was a bit quicker to paint than the scout sentinels, as the interior cannot be seen and therefore did not need painting. Comparing the three sentinels side by side, I can see where my painting has improved over the years, so by the time the fourth sentinel is done there will be some other improvements (hopefully!).

Thanks for reading, and now to find that paint brush!
Posted by Cadian 127th at 09:15

Looking good! I particularly liked the camo scheme and the transfer, it looks seamless on the model.

@ The Antipope - slowly I'm getting the hang of using MicroSol and Set, they really do make a difference. Thanks for the comment

Yeah, they do make a lot of difference. I don't think I'd be using transfers if it wasn't for them/

Wow, very nice. I used Micro Sol, but not Micro Set, on my Space Wolves to get pads to conform to the shape of the shoulder pads.