Long time, no blog. These past weeks I just really haven't been motivated into picking up a brush. But then a couple of days ago, whilst tidying the study, I decided it was time to brush the dust off the command squad that I foolishly proclaimed would only take a few days to finish.

So now that I've got around to doing some more painting, I thought I'd give a little update. I really honestly hope to have these guys finished in the next few days, it's just up to me to get working on them.

Here is the command squad's Junior Officer. Armed with a bolt pistol and power sword, this guy is going to get stuck in whether he wants to or not. With that in mind I went with a very grizzled looking face, something he may have picked up when he got his augmetic arm. The arm itself was painted Boltgun Metal and then got two heavy washes of Badab Black to tone the silver down. The sword was painted Mechrite Red, followed by a Baal Red wash. An edge highlight of Blood Red was added. The lightning pattern is Blood Red with a Skull White edge. The whole of the sword got another wash of Baal Red, and then the groove got a wash of Badab Black.

The personal shield device also got a heavy wash of Badab Black, again to tone down the silver. The whole model, except for the sword/sword arm, will get a wash of Devlan Mud before completion. For the skin, the head was undercoated with Tallarn Flesh, I then added an Ogryn Flesh wash. Once this had dried, Elf Flesh was drybrushed over the head. The eyes were painted black and then some white was painted over the top.

Next up is the standard bearer. I have spent a huge amount of time trying to get the flag to look right and so far I'm pleased with the outcome. The main body of the flag was painted Enchanted Blue. I then had a go at mixing up a lighter blue by adding some Ice Blue to the Enchanted. Once I was happy this mid blue was drybrushed onto the flag. Pure Ice Blue was then also drybrushed on.

The metallic areas are painted Boltgun Metal and will receive a highlight of Mithril Silver, before a thinnned wash of Badab Black. For the scrolls, I used Astronomican Grey as a base followed by several thin coats of Bleached Bone. I tried to leave a little bit of grey on the edges for definition.

I've got to admit that the circle star pattern thing was the most difficult part to paint. I started by putting down a base of Chaos Black. I then went over this with Astronomican Grey, trying to leave some black showing. Then I used Fortress Grey to finish it off, again allowing some of the previous layer to show through.

The edge of the flag is being painted Iyunden Darksun, and will get a highlight of Sunburst Yellow followed by a Gryphonne Sepia wash. I've tried to add some wood effect to the pole by painting thin lines of Vallejo Game Colour Scrofulous Brown oevr a base of Calthan Brown. I think that I need to learn how to steady my hand a bit better. 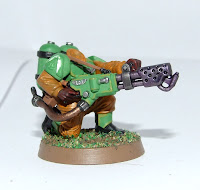 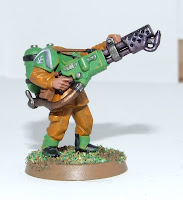 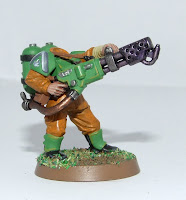 Finally here are the three flamer troopers that will make up the rest of the squad. All of them have been painted in the same way. The flamer nozzles were painted Chaos Black, and then Boltgun Metal. I then washed this with Badab Black. Once this was dry a thin wash of Leviathan Purple was applied to the nozzle, this was followed with a wash of Asurmen Blue. I was trying to get a heat discolouration pattern, but this needs a bit of refining.

The fuel hoses were painted with Brazen Brash over a Chaos Black undercoat, followed by a wash of Badab Black, which I seem to be using whenever possible. The shoulder emblems were painted in the same way as the flag design, except Codex Grey was added before the Fortress Grey highlight. A very light highlight of Skull White was also applied.

And there we have it for the moment. So after a month with nothing, I'll leave you all with that lot to digest. Thanks for reading.
Posted by Cadian 127th at 23:05