"Atten-shun!"
It's taken me several years but my Regimental Command Squad (RCS) is finally finished. It's taken me so long as I just cannot stand painting metal models. I like being able to paint the different sections of a model and then put it together. But I had to get these models done, so here is a nice group shot of them.

I've put a couple of photos of each model up as there seemed to be something wrong with each one that I took. In some the facial detail wouldn't show but something else would. So I'll start with the Commanding Officer. I had mentioned him in a previous post here and but he deserves a second mention. 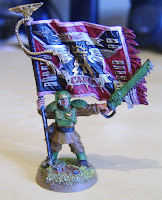 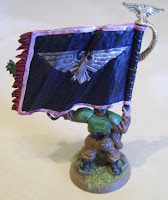 Next up is a guardsman carrying the Regimental standard - wonder how long this guy will last in a battle :S. This is the special edition model that came with the huge Cadian box set when they first came out. I'm in the process of coming up with a backstory behind the pinkness of the banner so await a little bit of fluff there.

No command squad would be complete without some comms, so here is the Vox Caster. Originally meant to be representing a Master Vox, but then the new codex came out so meh. I was going for a pose which suggested this guy was taking a breather while listening in to some comms chatter. All of the command squad got an extra piece of scenery on their base. This also makes them appear larger on the battlefield as they area couple of mm higher than the rest of the troops. 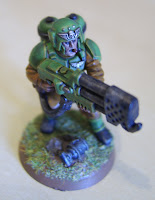 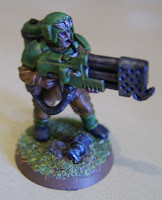 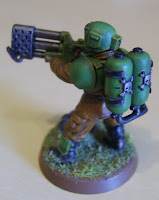 I love the smell of promethium in the morning! And what better way to deliver that flaming death than with a heavy flamer. This guardsman is made up from the bits out of the plastic Cadian Command Squad box set. I did encounter one problem with him, and that was the hose from his heavy flamer didn't reach the tank on his back, probably my fault with the way I posed him. Oh well, a little green stuff later and problem solved. I don't know if you'll be able to see it in the picture but I chose the head with the cigar in it's mouth, and painted the end a faint red, as if he'd just taken a smoke.

Finally we have the squad medic. This guy was actually quite fun to paint in the end. I did run out of ideas for the colours for his medical instruments but they turned out well.

So thats the RCS ready to lead the valiant troops of the 127th in to battle! And now to get some more troops enlisted in the 127th. Until next time, thanks for reading.
Posted by Cadian 127th at 14:10

Great work on the command squad. They look ready to hit the field of battle and lead the regiment to victory!

They all look good- love those old style medics. Way better than the plastic ones.

Hey nice job! I don't particularly enjoy painting metal models (or resin) but it has to be done unfortunately.

You're an awesome painter. The Heavy Flamer guy sees to be the best, so whatever you did with him, stick to it ;)