Sqaud 4-1-4 is finally finished! And I actually mean finished, not my half arsed job when I still need to seal them with varnish.

All of the shoulder pad squad markings have been painted on and the Cadian symbol transfers applied. They've all had their Devlan Mud washes, and then got sealed with Purity Seal.

Here is the squad shot, nothing more to say here. 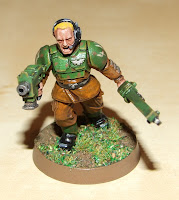 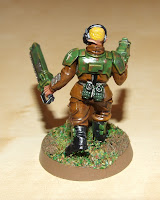 Leading squad 4-1-4 is our blonde sergeant, equipped with bolt pistol and close combat weapon. The bolt pistol's barrel has been drilled out as well.

Providing comm's is the injured guardsman. No wounded arm is going to stop this guy from carrying the vox set. The aerials aren't quite as bright as they appear in the photo, the flash really brightened them up. 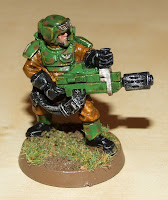 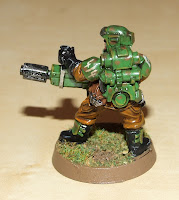 And finally the meltagunner. I've posted a pic of this guy before but here are some more.

Thanks for looking through the squad, but before you go please check out the poll on the right. I'm trying to find out what stye of squad photo I should use. The choice is between:
a) the style used on this post, the squad set out and taken as one shot
or
b) the style used on previous posts, where I take individual photos of the front and back of each model and then use Photoshop to mold them into one picture

Looking good as ever.

Cheers Zzzzzz. Trying to finish off some vehicles instead of infantry now