As the title says, Squad 4-1-4 is still a WIP. The squad is however somewhat closer to completion than it was a month ago. Even my ridiculously slow painting hasn't stopped me!

What has stopped me, or at least slowed me even further, is my broken finger. I broke my proximal phalanx of my ring finger on my left hand saving a shot while playing football (stupid me). Luckily I'm right handed so I can still hold a brush, I just can't hold a model steady in my left hand.

So enough of the sympathy story about me being even slower at painting, time for some pictures. 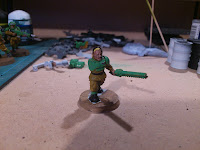 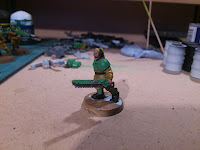 The least finished model in the squad is the sergeant. He can be seen above, sporting one arm and a fetching blonde haircut. His other arm is clutching a bolt pistol in the background, waiting to be finished before being glued in place. 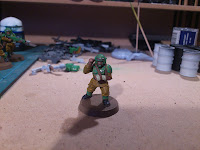 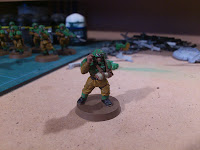 This unfortunate fellow that has the wounded arm will be the squads vox operator. As I rarely play outfitting him with a vox is more for aesthetics and to keep the squads kitted out the same. 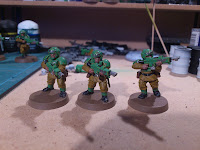 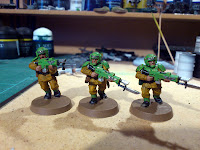 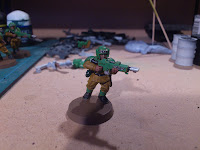 Next up are the seven other lasgun armed guardsmen. They've all got arms and heads now, unlike in the previous post.

Next up will be putting the decals on the shoulder pads, which I've already gloss varnished in anticipation, and then the squad marking on the other shoulder pad. Once that's done, a heavy wash of Devlan Mud will be plastered over each guardsman, and then I'll finish up their bases.