So it's taken me a while to get the pcitures and blog post sorted, but I finally got of my arse to do it. The new infantry squad is going to be squad 4-1-4, making it part of Platoon 4. 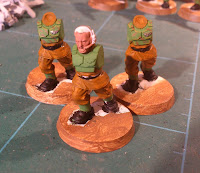 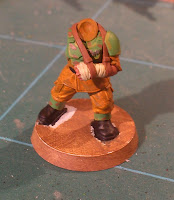 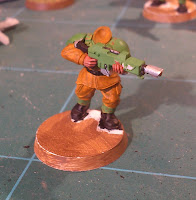 The pictures above show the troopers that are the furthest from completion, obvioulsy having no arms or head is a bit of a problem. I am currently painting up the lasguns for the two headless/armless troopers, and the weapons for the sergeant.

The trooper with his arm in a sling is waiting for his vox caster to be completed before I can add his head and other arm. And the final trooper just needs some highlighting and a head. 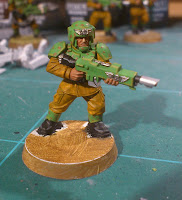 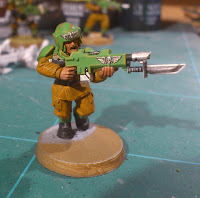 Here are two troopers that are actually close to completion. Highlighting has been done, now it's just a case of adding extra pouches etc. 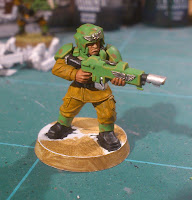 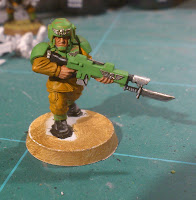 The same can be said for these two troopers as well, although one does need highlighting on his lasgun and shoulder pads. All of the troopers need to have their bases completed and then a wash of Devlan Mud before being sealed with matt varnish. 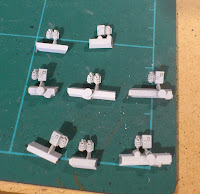 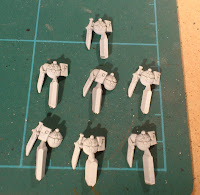 Just to give you an idea of how many pouches I have to paint up. I like to make sure that each trooper has basically the same kit, just changing the position of the pouches on the body, or maybe adding another grenade set to one to keep them individual. 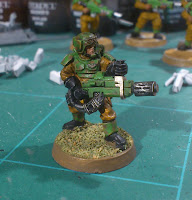 And finally this is the only trooper that is finished, the meltagunner. I can't remember if I've varnished him or not, so he'll probably get another coat when I do the rest. He is one of the metal models, so this extra varnish will help in the long run in case I drop him.

It took me a while but there are some pictures for you all to digest. Progress is slow but steady, but I have remembered to take more photos so I'll get them up soon (I hope). Thanks for reading.
Posted by Cadian 127th at 09:58

Nice work... I know all about slow and steady. I've been working on the same platoon of Catachans for a year now. :)

I think thats what puts me off painting sometimes - I spend ages doing it but then the models still aren't finished. Just have to keep plugging away at it though.

Have you already checked out my new hobby blog, Tale of Painters? I've joined forces with Sigur and Garfy, whose models you've probably seen in various forums or on the blog on GW.com. We've got tutorials, showcases, reviews and various projects going on, e.g. Garfy posts about assembling and painting a mighty Thunderhawk!

So come over and check out http://www.taleofpainters.com, I'd very happy ;)