The tanks just seem to keep rolling off the production line at the moment. This Basilisk is another model that has been waiting to have minor touches added before it can be called finished - and now those are done, here are some pics:

This is Basilisk is "Tonitrus", meaning "Thunder", and has the designation B23 (B for Basilisk, and 23 is the vehicle number). Like I said above, "Tonitrus" has been waiting to be finished, and at the moment I actually feel like I want to complete some of these older projects before starting on anything new after Christmas. 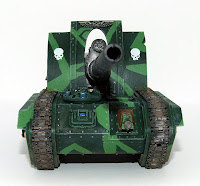 I wanted to give the Basilisk a different colour marking to my Leman Russ', so instead of Mechrite Red, I used Iyanden Darksun. The yellow looks really sharp on the model, even after being dulled with two washes with Gryphonne Sepia. On the front of the tank I used gloss varnish for the lenses, the same as on my other vehicles, for the shiny "glass" effect. 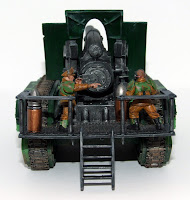 The shells on the rear platform have been taken from the Baneblade kit, and just about seem right for the Earthshaker cannon. The crew are just plastic Cadians, with the commander shouting orders at the crewman with the firing button.

I like adding a top down view so that the layout of extras can be seen (which there aren't many in this case). For some reason I took an angled photo as well, which I may decide to do for any future vehicles. 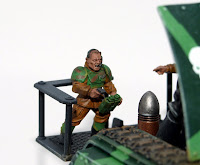 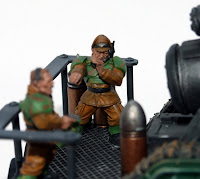 With the crew being visible, I took some close up shots. The crew are painted in the same colour armour and fatigues as the rest of my infantry.

The tank name, "Tonitrus", has been painted on both sides. The scroll was painted using Bleached Bone and the lettering is Adeptus Battlegrey. Any little mistakes were touched up before the Gryphonne Sepia washes were applied.

And to finish off is a clsoe up of the winged skull motif on the gun shield, along with the skull transfers. I didn't realise how of centre the Earthshaker cannon was until I saw this photo, that's Imperial engineering for you :-).

Thanks for reading, and I hope that everyone has a Merry Christmas and a Happy New Year!!!

courtney, misplaced your address to send you your penal squad. Let me know at mike dot tess at charter dot net

Hi there. Awesome work on the Basilisk, I especially love the camo paint job!

I am currently making a blog called '40,000 Pirates', which is dedicated to distributing printable Warhammer 40k figures for those that cannot afford the real thing (they also work well as proxies for those who want to test new armies/strategies at minimum cost).

I am writing to ask your permission to use the pictures in this blog post to make printable Imperial Guard Basilisk figures to include in my blog.

@ 40k Pirate - sure thing, you have my permission to use the Basilisk pictures.