Ride of the Valkyrie, Part 10

The Valkyrie is nearing completion. There's been a lack of updates recently as to be honest, I haven't done anything until the past couple of days. My time has been spent either at work, or watching DVDs that I got a Christmas or playing the several new PS3 games that I also got at Christmas. But on Friday I decided to give some time to the hobby that I've neglected for the past month and get the final things complete on the Valk.

The longest and most time consuming part was to get the paint chips finished. This is now done and I am very pleased with the results. I do think that if I choose to ever do paint chipping again I won't do as many on each panel, mainly because it took me so long. 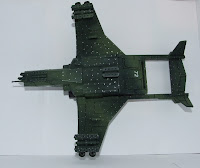 I also had to get the paint chips onto the canopy sections, which I think turned out ok. Again I didn't want the chipping to overpower the section of the model. 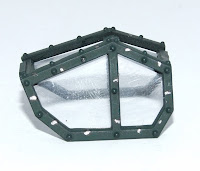 Through all this chipping, I'd completely forgotten to paint certain areas. One of these areas was the nose. The yellow sensor was painted with a couple of coats of Iyunden Darksun. For the red sensors, I started out with a coat of Mechrite Red. I then painted half of the sensor with Red Gore. Then I used Blood Red to highlight the Red Gore. Next up was a highlight of Blazing Orange, followed by a very small highlight of Skull White. 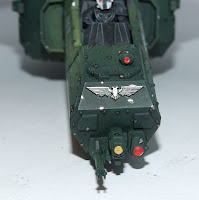 I had also forgotten to do the side sensor's and weapons. For the multilaser and lascannon I decided to go with a different scheme to my usual green's that I use on my vehicles. Instead I went with a simple black and silver design. I used Boltgun Metal with a Mithril Silver highlight for the metal areas, and Chaos Black with a highlight of Adeptus Battlegrey followed by a Fortress Grey highlight. I also chose to paint the weapons this way so that they are similar to the heavy bolters in the door mounts. 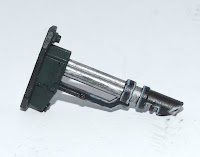 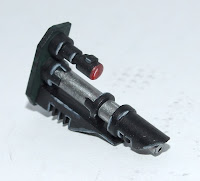 And now onto the side sensors. The red sensor was done in the same way as those on the Valk's nose, except they also got a wash of Baal Red at the end to tie all the colours together. The blue sensor started off with a base colour of Enchanted Blue. Next up half the sensor was painted with Mordian Blue. A highlight of Ice Blue was applied to this area, followed by a highlight of Skull White. The sensor was finished off with a wash of Asurmen Blue. 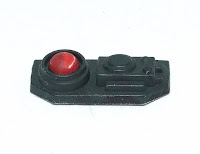 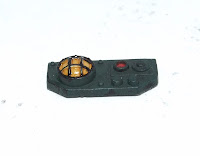 The yellow lights were a complete pain to do. I used Iyunden Darksun and applied several coats to get a nice smooth finish. Then using Chaos Black and a small brush I picked out the caging. Finally, I used a Gryphonne Sepia wash to give the lights some depth.

So the project is nearly complete. It has taken me way too long but I think the extra work I've put in is starting to show through. Next up I'm finishing off the under wing missile pods and magnetising the flying stand. I'll also be painting the base stand and adding some detail to that.

Stay tuned for the next post and hopefully (fingers crossed) a completed Valkyrie. Thanks for reading, and as always feel free to leave any comments/suggestions. Cheers.
Posted by Cadian 127th at 17:00

I would say that overall it's a good paintjob but there is a couple of things that I didn't liked. I did like the shading and highlighting (did you use an airbush for that? can't remember) and also the panel lining is very sleek. I also liked the side panels and the light effects (especially the red one).

What I didn't like is the paint chipping I am afraid. When I first looked at the pictures I thought it was some sort of came pattern to be honest. I think the chips are too uniform so it gives it an unaturral effect. You could go back with a sponge and do some more random chipping but this would give a very weathered effect. I also think that some of the metallic parts would need more definition, especially the guns. I think a quick wash with Badab Black could fix that easily. There is also some silvering on your decals, especially the "Capt Drote" and the one next to it. A bit of decal fixer could easily correct that.

Okay, sorry for the nitpicking but these are the stuff that bothered me. Hope it helps!

@ The Antipope - Cheers for the comments and suggestions.

Yeah I did use an airbrush for this bit. I just adjusted the spray nozzle to give a fine line, but I made the lines a bit thick still anyway.

The paint chips were difficult to make sure they didn’t look uniform. I’m hoping that once I’ve added my all over drybrush of Bleached Bone and the sealing coat of matt varnish will sort out the effect a bit. At the very least it’ll take some of the shine off.

I’ll give the metallic bits on the guns a wash with Badab Black. I normally do, but I forgot this time.

The silvering on the decals isn’t as bad in real life as it is in the photo. I did use MicroSol and MicroSet when I applied the transfers so I’m not too sure why they silvered a bit. Again, I hope that the coat of matt varnish will take the sheen off.