Ride of the Valkyrie, Part 9

Getting down to the nitty gritty bits of this project now, and giving my self a chance to practice some simple techniques that I've not tried before.

One of these is using a dark wash in the panel gaps. I've seen this technique used, and I wanted to give it a go to make the panels stand out a bit more. I used the normal GW Badab Black and applied a heavy wash into the recesses. I also applied it to the rivet holes as well. 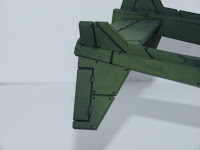 So here is a (blurry) photo of the tail section showing the above mentioned wash. It really does seem to give the model more depth and stops it from looking like a giant slab of green.

It can also be seen in some more of the photos but first I'll explain the second thing I tried out. Once again it's probably nothing new to some of you, but a first for me - and that first is paint chipping. Normally I just use drybrushing to provide the weathering on my models. However, I wanted to do a bit more to the Valk, and so attempted paint chipping. For those that haven't tried it, basically you paint a small area with black, in my case Chaos Black, and then paint a small amount of metallic colour inside the black, Boltgun Metal for me. 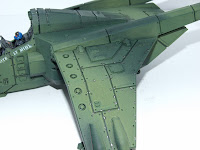 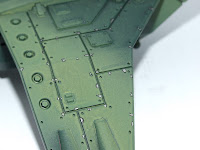 The above pics show my attempt at paint chipping. I'm not sure if I want there to be lots more chips, or if the one's that I've got will be about enough. I will probably add some more to the edge's of the wings and also on the areas where the panels change.

What I have realised is that paint chipping is a very time consuming task and takes a lot of patience, especially on such a large model. I'm trying to do them in batches so I don't go cross eyed in the process. So they are the two simple techniques that I decided to try my hand at. 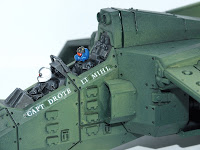 Having seen some other Valkyrie's on forums etc, I wanted to add the pilot's and copilot's names to the side, much like you see on other aircraft. With this in mind, I grabbed the Forgeworld Imperial Guard transfer sheet that I had an proceeded to come up with some names and possible ranks.

In the end I settled with Capt Desh and Lt Minan, and set about cutting the individual letters from the sheet and applying them to the model using MicroSet followed by MicroSol.The observant among you will notice that these are not the names in the picture above. That's because I managed to knock over my nearly full bottle of MicroSet whilst applying the transfers. I'd managed to get to Capt D and Lt Mi when this happened. Of course the MicroSet went everywhere, over my painting station, over my leg, onto the floor.

Unfortunately it managed to flood the remaining transfers off the desk and into the abyss below. So quickly scrambling round the desk, I grabbed a modelling knife and very carefully removed some sections of lettering from the phrase I had dissected in the first place. These happened to be ROTE and H and L.

Having rescued these letters, I managed to get them in place and complete the names. Some words of warning, do not work with open bottles of fluid of any kind when you have to reach round them, and try to have a back up plan in case things do take a turn for the worst. For those that want to know, I was using the phrase "Let Faith Protect Your Mind and Metal Your Flesh" as it had the most letters on it. 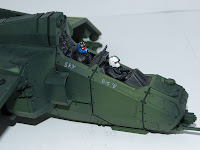 Now that that little disaster was over, I added some nicknames to the other side. Something that the aircrew had added to their machine when the Techpriests weren't watching. So Capt Drote is known as " Big 'D' " and Lt Mihl is "Sky". The nicknames were painted on using Adeptus Battlegrey and then a highlight line of Fortress Grey.

Right I'm off to add some more paint chips and transfers to the model, I hope to have another post up before Christmas, if not Merry Christmas to all and I hope that everyone has a great time. Thanks for reading!
Posted by Cadian 127th at 16:00

The wash looks great, and I love the story with the transfers, too!

@ Drax - If I didn't like the look that transfers provide on a model (and if my freehand was a lot better) I'd stop using them so I could avoid such accidents.