Ride of the Valkyrie, Part 8

Due to the snow in the UK, I could't get to work so I decided it to do some painting (after playing on Gran Turismo 5 for several hours).

I worked on the pilot and co polit, and their cockpit's and also the under wing weapons. Here are some pics for you to enjoy: 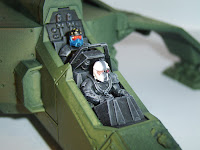 First of all a pic looking at the two crew members. Like other's, I wanted to give them an individual feel, and painted the helmets differently. The front guy's helmet was a right pain with it being white, I lost count of how many thin coats I had to put on, and he still isn't quite finished. I went with a grey stripe using Adeptus Battlegrey, then Codex Grey and finally Fortress Grey. Its plain and simple but pretty effective. His targeting eye isn't finished yet, and needs a dot of bright red, and a gloss varnish once I've done the matt varnish. 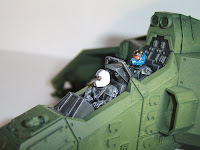 The other side of the crew, although the front guy is a bit bleached. In contrast I painted the rear crew member's helmet bright blue, Enchanted Blue to be precise, with a highlight of Ice Blue and then an Asurmen Blue wash. The visor was a Mechrite Red base, then Red Gore, then Blood Red, then Blazing Orange with a Skull White dot. This will get a gloss varnish like the targeting eye on the guy in front. 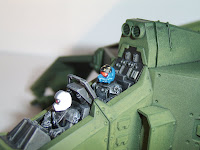 This picture focuses on the rear crew member a bit better. You can also see the detail on the top of the helmet a bit better. I left this section black and painted on small X's using Iyanden Darksun, with a small dot of Skull White in the centre. The edge of the helmet was highlighted using Codex Grey. 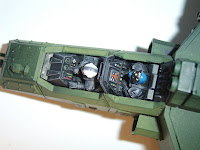 Time for a top down shot. This shows off the helmet designs a bit better, but the main focus here is the dials, readouts and buttons. I wanted to try and keep the colours that I used down to a minimum, so I doesn't look like I used every colour in the spectrum for the dials etc. I've done a test fit of the clear canopy and the inside still stands out which is a result. 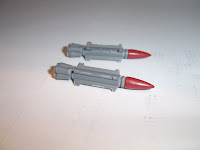 Finally here are the two under wing HK missiles. The missile warhead was basecoated Mechrite Red with a Blood Red highlight and then a wash of Baal Red. The body of the missile was basecoated Codex Grey. I then applied a Fortress Grey highlight. I'm not sure if I want to put a light wash of Badad Black over the missile body, I may just put it in the recesses.

So thats all I've got done, I'm still finishing off the pilot/copilot and have started work on the missile pods. Once they are done I'll get the engines finished. Until then, thanks for reading and feel free to leave comments, suggestions etc. Cheers.

Hey, pretty cool update. Crew and panels are looking good. Might want to use a dark wash over the uniforms though to tone down the drybrushing.

Excellent stuff. I admire your skill and dedication.

@ The Antipope - I'll grab the Badab Black wash and give the uniforms a coating.

@ Zzzzzz - cheers for the comment, the white helmet was a test of patience.