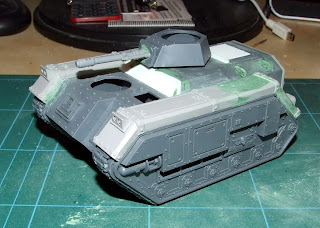 I'll start off with the Chimera that has had the most work. Ok, so the big gaping hole on the armour plate has been covered and sanded smooth. The lasgun ports have been filled and sanded smooth as well. The tracks have also been added - and man do I love how easily these new Chimera's tracks go on! 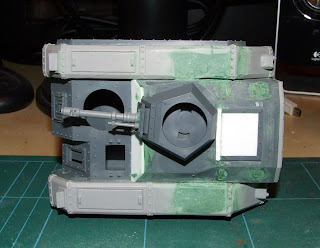 I had a set of ForgeWorld track guards lying around that had definitely seen better days. They were bent and broken (an extremely cheap eBay purchase). Using the hot water technique, I managed to get the resin to conform to the tank's shape a bit better. However, the fit was still pretty crap. Drastic measures were needed, so I grabbed the hobby saw and removed the rear slope section and also part of the middle section. I then filed and sanded these down until they could fit. Even then there was still a bit of a gap, and the gap where I had hacked them apart, so I used green putty to fill them and then smoothed it down. 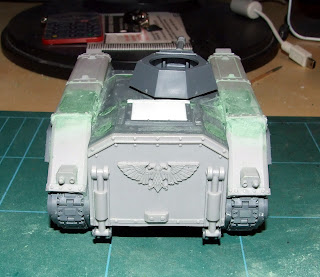 I also filled the gap that is on the track guards as standard, which can be seen of the ForgeWorld website here. This was a bit of a pain as I had to get the track guards looking like they weren't a complete patch job. A lot of putty and sanding later and the effect is passable. Once some stowage and accessories have been added they should be all but sorted anyway.

As well as the track guards I also had a FW rear door. Again this needed the hot water treatment, but fortunately was a lot easier to get to fit. The top hatch was also covered using a couple of pieces of plastic card. I will add a handle to this later on. 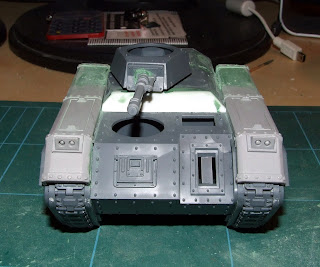 During construction, I added a piece of sprue where the hull mounted weapon will go. I couldn't decide if I wanted to magnetise the hull weapon, but this will provide me with somewhere to put the magnet in the future. The final bit of conversion on this Chimera was the main gun. I trimmed down an autocannon from the Cadian heavy weapons team sprue so that it would fit on the turret mount - just to be different. I have got a FW autocannon turret, but its got a round peg mount and the new Chimera's have a sort of key mount. That will be a conversion for the next one. 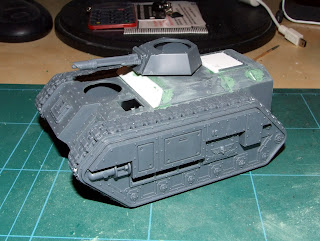 And here is the second Chimera. Whilst this one has not seen as much attention, it is basically ready to have the final bits added. I may add some stock track guards, but the rear door will be the normal one.

Next up will be the circular hole on the front. I'm not sure if I want to follow Sandwyrm's pattern and use a square hatch to cover it, or to use a regular round hatch. Time for some experimentation. Thanks for reading.
Posted by Cadian 127th at 08:30

Really digging how this is coming along. I like the idea of doing the magnetized hull weapons - that'll be really cool!

If I may make one suggestion, on the turret autocannon I'd cut the muzzle off the barrel, rotate it 90 degrees and re-attach it such that the exhausts are horizontal to the ground as they are when the weapon is oriented normally. It's one of those little details that stands out in my eyes.

Keep up the great work, man!

@ Mordian 7th - I'm thinking the magnetised weapons will be easier than most of the conversion work.

I looked at the muzzle on the autocannon when I glued it in place and didn't think it looked right, so I'll try and change that.

I may have to steal this idea at some point.
looking good.