The Chimeras are continuing to take shape nicely, with all but the minor details now modelled. This is a pic heavy post, but I do have a conundrum. I don't know if I should add the dozer blade permanently, leave it off permanently or magnetise it. What are your ideas? 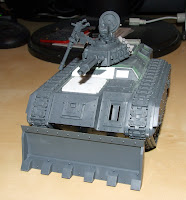 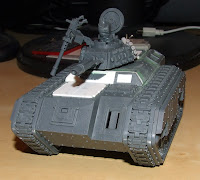 Anyway, onto the pictures. Here is the first Chimera, with the dozer blade in place and then removed, to give you an idea of what it would/could look like. 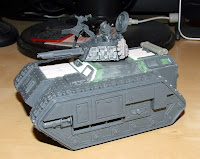 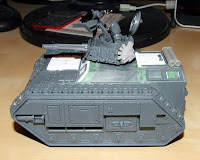 The smoke launcher on the side of the turret is a leftover from the FW mine clearer kit and the extra armour are sections of track trimmed down. The crewman will get arms and a head, but not until after the tank has been painted. 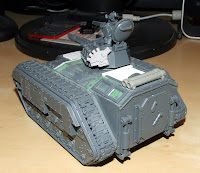 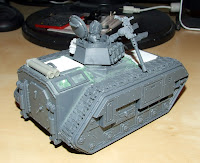 Here you can see the smoke launcher and extra stowage on the back of the tank, as well as the standard rear door. I glued the rear door in place as there isn't much to see on the inside. 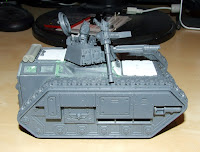 I drilled the venting holes on the heavy stubber barrel, and also the barrel end. I can't seem to get the hole's dead centre when I'm doing them, so any tips would be appreciated. 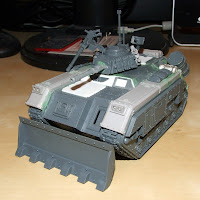 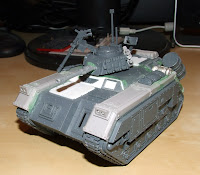 Here is the second Chimera, again with the dozer blade in place and removed. This one has received a lot more kit on it to cover up the patch work track guards. 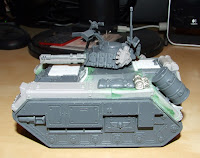 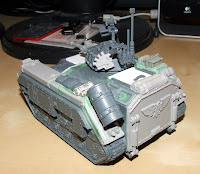 A mix of tank accessory sprue items, Forgeworld extra stowage and some old metal pieces were used. I also had another smoke launcher, so added that to the turret to make the look more uniform. 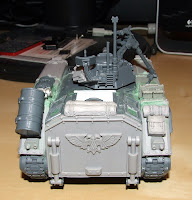 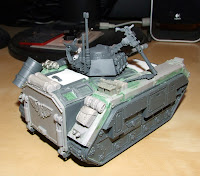 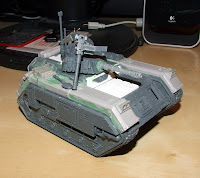 I'm still trying to decide what to add to the blank turret panel on each tank, but this may stay empty and just have markings. Mordian 7th suggested that I should turn the autocannon muzzle around so the vents were horizontal. In doing so, I glued the muzzle on the wrong end to where I had cut it. But I think the outcome is ok.

all the work you have put in is really showing!
I say magnetise the blade(the best of both worlds).
When I drill out the barrels on plastic guns I just hold the gun in one hand and the drill bit in the other and spin it by hand so I can get the exact centre. I don't use the drill itself just the drill bit. Also I use a small drill bit first for a pilot hole and then swap to a bigger one. I guess everyone will have their own method!
All in all I reckon they are looking pretty sweet!

Those are really looking good! I love the extra stowage, very well done.

As far as centering barrel holes, I'll usually start by picking out the center point with a small bit or the tip of an x-acto blade, then going with a larger bit for the final step.

Keep up the great work!

Following this with great interest! I'd magnetise as well, just for the versatility.

Guide holes for drilling are the way forward.

I'd magnetise the 'blade.

Thanks for the comments everyone. I'll keep trying with the drilling and hopefully its just a lack of practice.

I think its a unanimous decision to magnetise the blade. Time to grab the magnets and superglue and hope I don't end up with magnet's stuck to my fingers again.

Very nice, I would say magnetise. I only have one of my Chimeras with blade and the others don't, but yours still look good with or without.

As for getting holes centre you could use a drill puncher (I think that's what they are called) before drilling. Or you could go off what Col Ackland say's as it is the simplist way.

On a last note thanks for following my blog.

@ Commissar Dave - cheers for the comment. A drill puncher, may have to have a look.

No probs, I found your blog from a comment you made on another one I follow. Thanks for following mine as well.