Today I had a wander into my FLGS to pick up a Cadian Command Squad I had ordered in. It's located in a DIY shop, with the GW stuff at the front and the plumbing, electrical etc stuff at the back.

However, when I went in, all of the gaming tables had been moved behind the counter, the GW shelves were pretty much empty, the display cabinets were empty and the usual member of staff was nowhere to be seen.

Confused, I spoke to the member of staff who was in there, and was told that the usual guy had cleared out his stuff and gone on the missing list, possibly to Scotland. Even more confused, I asked about my order and was told that none of the orders had been placed. Fortunately I hadn't paid for the models yet, otherwise that may have been a bit of a problem.

Now a little bit annoyed, I asked what they were going to do with the remaining stock, tables and scenery and was informed that if they couldn't sell it, they'd throw it in the bin. Seeing an opportunity, I had a sift through the paints and scenery and grabbed 8 paints, a can of purity seal and a built and painted (and rather battered Bastion) - all for £25.

After I'd bought my bits, the member of staff asked if I could find out if anyone else may be interested in buying some of the left over stock, so this is me asking those of you in the blogging world that question.

The store is located in Longton, in Stoke-on-Trent, Staffordshire, United Kingdom. And the address is: 21 Commerce Street, Longton, ST3 1NW and is inside a shop called Dingy's.

I'm not sure how long he'll hold on to the stock for, but if anyone's local (ish) then you may be able to grab some bits. And here is the battered Bastion: 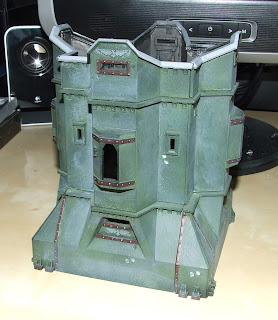 I reckon it can be salvaged, it's now about to receive a Power Spray bath to strip the paintwork down.
Posted by Cadian 127th at 12:53

Another one bites the dust. The toy shop here carried one of those 'get your local toyshop to stock our stuff and we'll give you a voucher' stands. It wasn't there very long.

Quite fancy getting another table...

@ Zzzzzz - Its a bit of a shame really, as I could walk to it. Fortunately another shop has opened up not too far away, so I'll be off to check out their prices at some point.