Let there be pictures! Part One

Finally, after a month and a half, I have managed to get off my arse and take some pictures of the majority of my army. Please bear in mind when you look at these pics that the models and still in varying levels of completion - some may only need to be varnished whereas others obviously haven't even been undercoated yet.

The pictures will be in some sort of order - so HQ to Heavy Support etc. I'll try to explain what's left to do for each picture but I apologise beforehand if I get some things wrong or leave them out all together :). 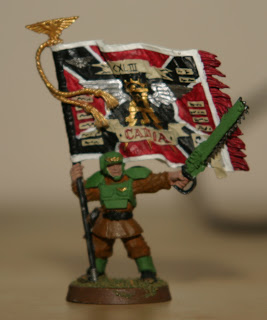 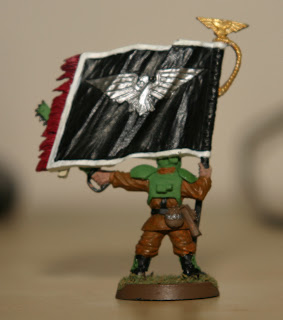 Ok then first pictures. If you've looked at my blog before you'll recognise this guy from my "We have a picture" blog. He is of course my Regimental Standard Bearer from my Command Squad. This little fella is almost complete, he just needs transfers on each shoulder pad and some highlighting on the flesh. I also need to change the Regiment number at the top of the standard as it currently reads C X L I I I which is 143 - the original Regiment number. This will be changed to C X X V I I (127) so I only have to change 2 of the numerals making my life so much easier. He also just needs a bit more done to the base, I'm going to add a bit of static grass to it. 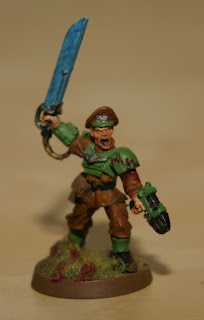 Next picture. One Lieutenant for a Command Squad, probably for Platoon 7. Like a lot of my models I wanted this guy to look like he was in a war/battle, so wounds and blood were a must. The only problem is, I can't put the Command Squad transfer on his shoulder because of the wounds - oh well. The transfer on the right shoulder is all that is left to be done on this guy. Although looking at it I think I need to do something with his mouth as my painting skill obviously doesn't quite cut it. 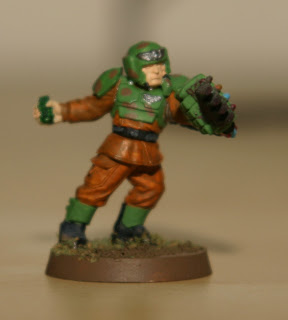 Another Lieutenant and one of the only conversions you'll find in my army. As my modelling skills aren't that great I try and avoid complicated and skillful conversions. Instead a weapon or head swap is the most I'll go for. With this guy I wanted something other than the metal models from GW, so using a plastic Cadian model and the power claw arm from the Space Marine Commander set I went about filing and cutting the shoulder so that it would fit snugly. Overall I'm quite impressed with it as the shoulder almost matches the Cadian pads. This Lieutenant will probably be for Platoon 9. Once again this guy needs a transfer or two and the base finishing off. 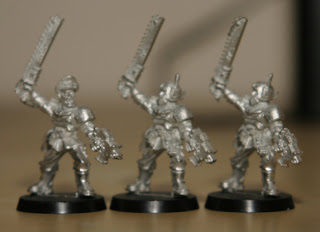 Oh look more Lieutenants. Not a lot has to be said about these guys. Obviously nothing has been done to them, I got them about a month ago from eBay for £6 for all 3 - bargain. I may use them as squad leaders or do a weapon swap and keep them in a Command Squad - bolt pistol and power sword. I have got another Lieutenant in my army case but I couldn't be bothered to take a pic of him along with some other models. 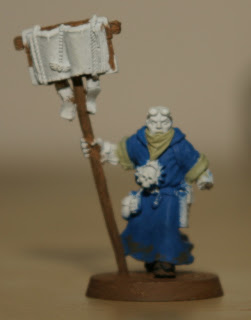 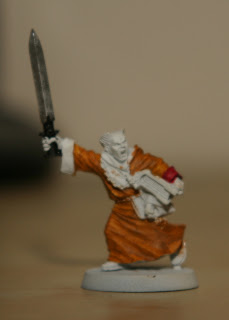 Preachers. Decided to add some preachers to my army just for a bit more flavour. So I have these guys and the beginning of painting and one with an Eviscerator not even undercoated. 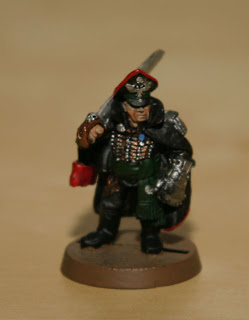 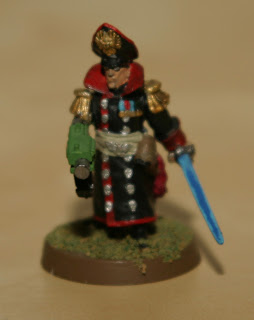 Commissars - don't you just love 'em. I know there are a few Guard players out there that don't really like having Commissars in their army but I have to admit I do. There's just something about the undeniable faith in the Emperor that makes these stalwart advisors a bonus to the battlefield - plus having your heroic senior officer shot for cowardice is always fun. Both of the Commissars need their base completing and a dark grey wash on their cloaks just to break up the dullness a bit. As I like Commissars so much, I have 2 of the new style models waiting to be undercoatd and the current Yarrick model. I'm also hoping to get the Krieg FW Commissars as they look amazing. 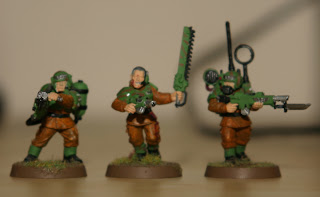 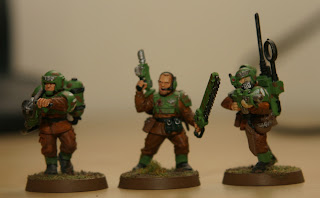 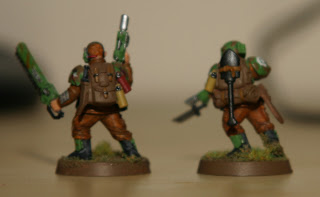 Onwards. Platoon 7 - Squads 721 and 741. First of all, I have messed up all of my poorly hand painted squad numbers - and by all I mean on all four infantry squads (2 for Platoon 7 and 2 for Platoon 9). Currently the squad numbers read 712 and 714 which when I checked the Guard Codex is wrong. Therefore I will be repainting the shoulder pads and painting on the correct numbers.

The first 4 pictures are of Squad 721 and the second 5 pictures are of Squad 741. Other than the need to repaint squad numbers, like a lot of the rest of my army these models are almost complete. Only a few odd bits, like touching up the paint, and a wash over the flesh need to be done. As you can hopefully see, all of the models have equipment on their waists. I've done this for two reasons. Firstly, as troops in combat they would be carrying ammunition etc and secondly to cover up any gaps etc from my inability to put models together properly.

Ok, I'm going to have to leave this post at that point for the moment as I have things to do, but do not panic, I will try and get another post done tonight or tomorrow with the rest of the current pictures. Just to give you a teaser, here's a shot of my command tank for my Emperor's Fist tank company. Thanks for reading. 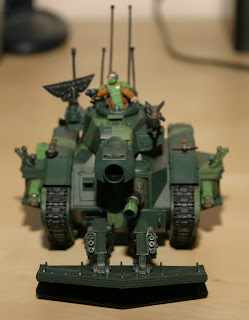