Time for a (relatively) short update on the Shadowsword. As before the previous posts can be found here: Part 1, Part 2, Part 3 and Part 4. Today's update is about the lascannon turrets that go on the top of the side armour sponsons. 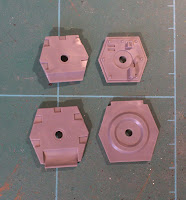 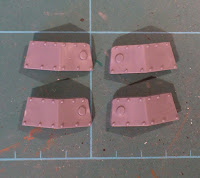 First of all, just a few pics of the individual pieces laid out. 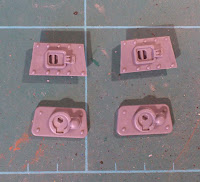 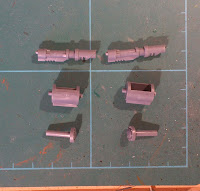 And then the rest of the pieces, including the lascannon's themselves. 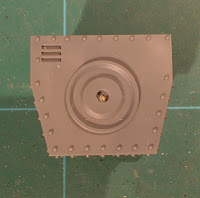 I did wonder if I needed to magnetise the turrets onto the sponsons, as the turrets do sit nicely in place, as they were designed to be held by gravity. However then I thought, if the tank is being moved/carried/placed on terrain, the gravity hold probably won't be enough. So I started off by putting a magnet into the guide hole on the top of the sponson. I've bought some new magnets recently so this one is 2mm wide by 0.5mm thick approximately (very fiddly).

Now if I'd just glued another magnet onto the guide peg, the turrets would sit out of the mounting and look stupid. So I marked the peg about 2mm along and then began to careful file the plastic away. Once I'd reached my mark, I placed another magnet on the one already glued and dry fitted the peg. Some more filing was needed, and I re tested the fit until I was happy. The magnet was then glued onto the end of the peg and left to dry. Once the super glue had dried, the peg was inserted through the turret and glued in place with plastic glue. This process was then repeated for the other turret. 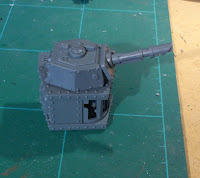 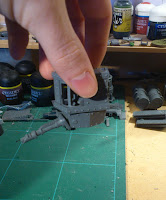 And finally, here is a picture showing just how strong these little magnets are. Even with a bit of shaking the thing would not let go. Thanks for reading.
Posted by Cadian 127th at 08:24