Over the weekend I managed to get a few things done on the magnetised Shadowsword. Having completed the magnetisation of the armour panels in Part 1, it was time to crack on with the side sponsons.

The sponsons proved to be the hardest part of the process so far, as I will now explain. If you've ever had the pleasure of building a Baneblade/Shadowsword kit, then you'll know how fiddly the sponsons are to build. 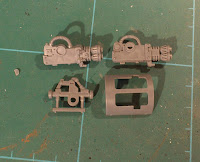 The pic above shows the sponson weapon parts: two weapons, weapon shield and central mount. The central mount slots into the top and bottom of the sponson housing and can move freely. To magnetise this piece, the two guide pegs on either end were removed (this has already been done in the picture above). Next up a hole was needed on each end for the magnets to be placed in. Using a 2mm drill bit, I made a hole the right depth to fit one magnet.

Before gluing this magnet in place I thought I'd check to see if my idea would work. I put two magnets into the hole I'd made (one fully inserted and the other fully out), and then dry fitted this piece onto the base plate for the sponson. I'm glad I didn't glue the magnet in place as the piece would not sit flush on the base plate. With a few clever uses of magnets and blu tac, I assembled the whole of the sponson housing and found that there would be quite a big gap with both magnets on each end. I grabbed the hand drill again and continued to make the hole deeper, being very aware not to drill in too much as I would break the join on the plastic. 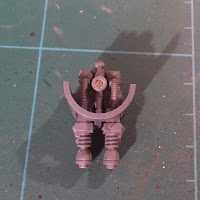 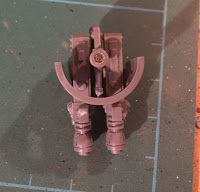 Eventually I managed to get the hole's to a good depth on both ends, and tried my long winded test method from above once again. This time the piece's all went together perfectly, and I could glue the magnets in place. The pictures above show the magnets on each end of the central mount. I'm not going to glue the gun shield onto the mount so I can use either the heavy bolters or heavy flamers for games. I hope that the bit of plastic between the weapons doesn't break off (it seems a bit flimsy).

Continuing on the fiddly magnet theme, I now had to glue one into the mounting hole on the top and bottom plates. I did this by putting a magnet on the end of the central mount, and dabbing some super glue onto the exposed side. I put the mount into the hole on the bottom plate and then put a bigger magnet on the outside to hold the central mount in place while the super glue dried. Once dry, I carefully pulled the pieces apart, leaving the magnet glued firmly in place on the bottom plate.

The other larger magnet in the picture above is actually two magnets on top of each other. These were added to give the bottom plate some more magnetism in order to keep it attached to the larger top piece. 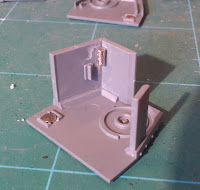 And here is the larger top piece. I added a magnet to the mounting hole in the same way as on the bottom piece. You will also be able to see the cylinder magnet on the armour plates. This magnet is pretty much in line with the double stacked magnet on the bottom plate. I could have got them to line up properly, but didn't want to start hacking away at the guiding slots for the armour. Either way there is enough pull from the magnets to keep the top and bottom pieces together, and the central weapon mount helps to keep this pull evenly spread. 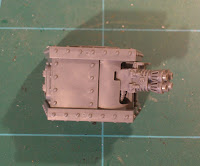 Here is the full sponson, with heavy flamers attached. As you can see the whole thing fits together quite nicely and with those extra magnets is very strong. I spend about 30 seconds shaking the thing about all over the place trying to get the magnets to let go as a test, and there was hardly any movement, which is exactly what I wanted. 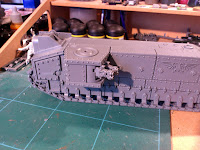 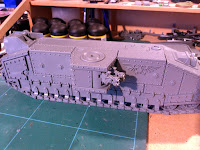 And just to show that I'm not making it all up, here is the sponson on the side section. The second picture was me seeing what the sponson looked like in a different slot. I have been considering buying another set of sponsons so that I can have two on each side but maybe for another Baneblade :). Thanks for reading all of this, I'm off to magnetise the other sponson.
Posted by Cadian 127th at 08:59