When the first details of the 40k 25th anniversary model were first released, I knew immediately that I had to get one. First of all because the model just looks cool, and secondly because one of my little side projects is a small force of Crimson fists. When I collected Space Marines many years ago, I painted them up as these ork killing bad boys.

So I pre ordered my model to collect in store and went along on Saturday to pick it up. By the time I got to the till to ask for my model, they had sold out, so I was quite happy I'd ordered it. So here are some pics. 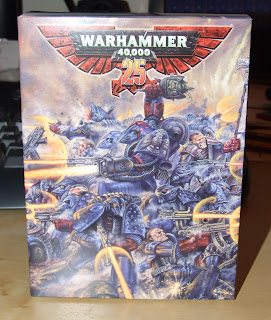 Starting off with the box. I was expecting a bigger box, I don't know why though. The box is 11.3cm wide, 15cm high and 3.5cm deep. The artwork on the outside is very nice, and the full colour photos on the cover (which is held closed by a magnet) give me some inspiration. 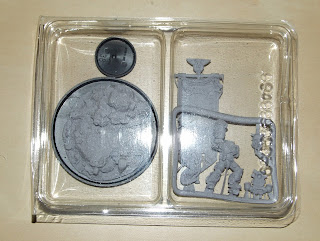 Opening up the box, and out comes the plastic tray holding the components for the model. Now for a "special limited edition" model, I would have like to have seen a bit more in the way of protection to stop all the pieces rolling around, maybe some foam or something. Now onto the model itself, which is where things go wrong. 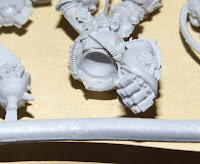 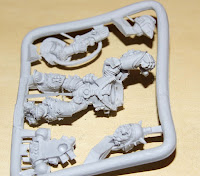 The detailing on the model itself is brilliant, from the severed ork's head to the fist's on the banner. The most noticeable fault however, is with the armour section on the neck. The two pics above, which can be seen bigger, show what I'm talking about. The resin is non existent in a few areas and translucent in others. And this wasn't the only problem. 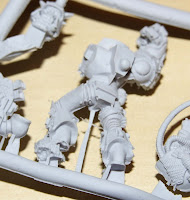 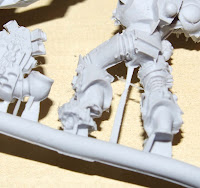 On the model I found a few other faults. On the heel of the left foot there is a nice void where I'm guessing an air bubble was, and also on the bum armour there is the same sort of void. I imagine that these problems could all be fixed very easily if you know what you're doing when it comes to green stuff. I do not really know what I'm doing, nor do I want to practice on my £20 mini. 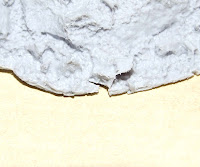 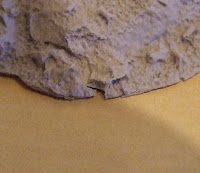 Next up were some problems with the base. First of all there is a crack in the edge. Maybe this could have been avoided with better packaging. This probably won't matter once the piece has been glued to the normal base that came with it. 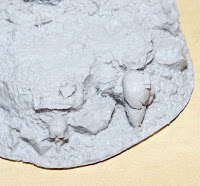 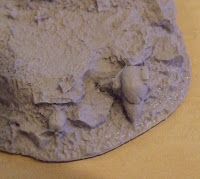 I'm not sure if the fault here will show up, but again it's a problem with the thickness (or lack of) of the resin. I'm hoping that I can sort this by just using a blob of green stuff on the underneath. 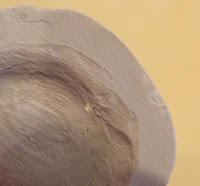 And finally here is a view underneath the base piece. Here you can see the thin resin area, and also a thin area on the edge of the piece as well.

Overall I am very impressed with both the model and the packaging. Nice clear pictures and the reproduced artwork help the box to stand out. The plastic tray could have been padded out to avoid damage during transportation though.

The detailing on the model is excellent. I really hope that I can do this mini justice and get it finished. The Finecast casting faults do let the model down. As I said before, someone with more skill than me would probably be able to fix them easily, but for now I'll have to work around them.

As a closing statement, I have e-mailed Games Workshop's customer service team with the pictures I have posted here and explained to them the problems I have encountered. I hope that I can get a quick response and that they resolve the issue. Thanks for reading.
Posted by Cadian 127th at 10:26

Good review, I've been hearing a lot of negative things about Finecast in general and this model specifically. You would think GW would go out of their way to ensure quality in their anniversary mini.

@ Chris - this is my second finecast model. I was a bit reluctant to buy because of all the negative stories, but just had to get this one. I do think GW should have done better though