Welcome to Part 3, please take a look at Part 1 and Part 2 to see what I've been up to previously.

Taking a break from the fiddly sponsons, I moved on to the engine section/stepped troop section that goes at the back of the super heavy. Given that this area needed to be used in differently in the variants, I grabbed the magnets and blu tac and started to fit things together in a trial run. 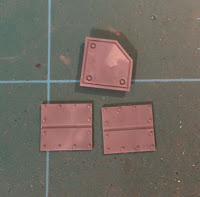 First off though, are these little armour pieces, which go on the inside of the engine bay, and can only be seen when being used as a troop carrier. The armour piece at the top is actually from the front of the tank, but I didn't realise that until after I'd taken the photo. 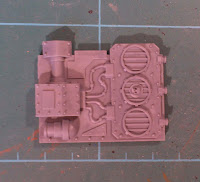 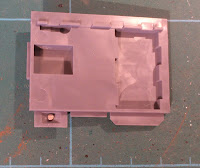 This is the top cover for the engine. All I added here was a small magnet in the section that overlaps with the back of the tank, nothing too complicated. 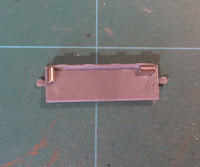 At first, I wondered what this piece was for (not really looking at the instructions :-S). Then I looked at the instructions, and saw that it'll fit underneath the engine cover to completely seal the rear section. I glued a magnet to each end, trying different alignments to see which would hold better. This was also due to lack of space to glue the opposing magnet on the rear section which can be seen in the pics below. 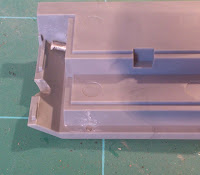 So here is the rear section. As mentioned above, this will be part of the troop carrier platform, or when covered, the engine bay. First of all I drilled a hole for a magnet to hold the top engine cover in place. I almost drilled this completely through the plastic, my mistake. Fortunately it didn't go through and I had a hole deep enough to hold 2 magnets for extra strength. 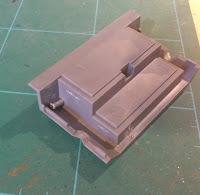 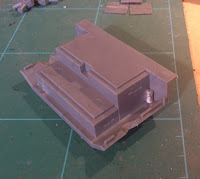 Next up were the magnets to hold the other covering piece. These magnets were placed by literally putting some super glue in roughly the right place, holding the cover in its place, and then dropping a magnet into the glue and letting the magnetic fields do the lining up. 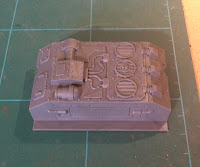 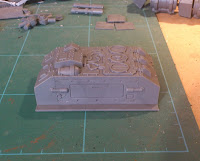 Having left the super glue to dry (the current one I'm using seems to take a bit longer than GW's own), I tested out my magnetised covers. And they fit and line up great, with enough pull on the magnets that they won't fall off with normal tabletop use.