Sorry for the gap between parts 5 and 6, my internet has been down due to a fault at the exchange which has taken them a week and a half to fix, but never mind.
If this is the first time you've taken a look at this project, please find the previous entries to this WIP here: Part 1, Part 2, Part 3, Part 4 and Part 5.

In this post I'll be concentrating on the main weapons for the super heavy, so here goes. 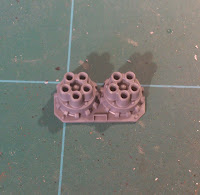 I'll start off with the Vulcan mega bolter parts. Above you can see the bolter barrels and the side of the weapon housing. 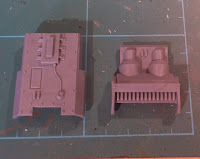 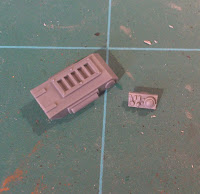 Here are more parts for the mega bolter. The left picture is the main weapon housing and the right is the targeting array that is mounted on top. 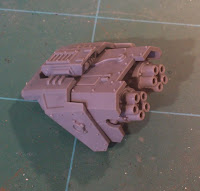 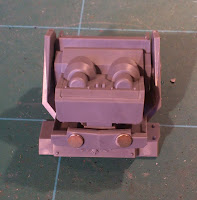 The fully assembled mega bolter can be seen in the left hand picture. The outer housing moves freely allowing the rest the of the weapon to tilt slightly. The right hand picture shows pretty obviously how I've magnetised this weapon. On the inside of the main turret are two corresponding magnets which hold the whole weapon in place firmly. These magnets can't be seen once the weapon is slotted in, so trying to hide them was not necessary. 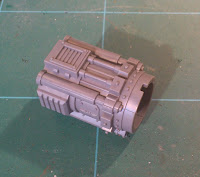 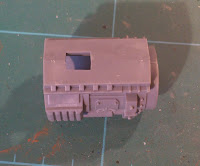 Next up is the mount for the rest of the main weapon options. This is actually made up of three pieces but I only took a picture of the finished part. Normally the mount would slot into the turret and be fixed in place by an armour piece on the top and the guide hole on the bottom, which can be seen on the right hand pic. However, as I want to be able to swap the weapons around drastic measures had to be taken. 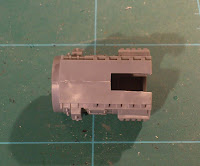 And here is the result of these drastic measures (I've noticed that the mount is rotated the opposite way to the one before the butchery began). Basically I had to cut out the short section between the guide hole and the end of the piece. This was then smoothed out and test fitted to the guide peg on the turret. Now the mount can be inserted and removed easily, the fit is snug enough that it won't move around too much, and because of this fit I decided not to magnetise it. Obviously you can add magnets in the same places as the mega bolter for extra security if needed. 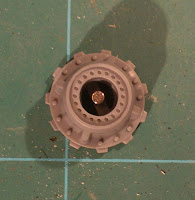 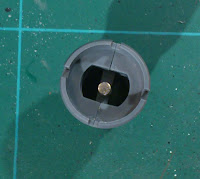 The weapon barrels were another problem as well. The main Volcano cannon barrel and muzzle push fit nicely so did not need magnetising luckily. I did need to magnetise the Stormsword cannon, which also meant magnetising the Tremor cannon for the Banehammer. To do this, I grabbed a few bits of leftover sprue and cut them down to fit inside the weapons. When the fit was right, I glued the sprue in place. Having left the glue to dry, I used super glue and added a cylinder magnet to one of the pieces of sprue. Again having left that glue to dry, I double checked that the pieces would attract to each other before I glued the final magnet. 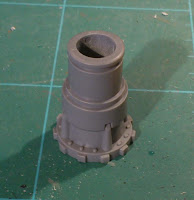 And here is the fruit of my labour. On the left you can see the two pieces laid out separately and on the right is what they look like once they have been built and held by the magnets. Thanks for reading this, I'm off to buy some more black spray paint so I can get this
beast primed and ready for painting.