The construction side of things has finished, and painting has begun. So here is a pic heavy update. 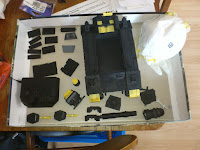 Everything then received several light coats of Vallejo Model Air Black Green. Normally I use Citadel Orkhide Shade, but having heard good things about Vallejo, I thought I'd give them a try. I also wanted to try and make this tank look like some panels had been replaced or resprayed recently, so I gave them an additional coat to really make them appear green. This can be seen on the picture of the whole tank. This super heavy also bears a blue recognition stripe, like my Baneblade "Vengeance". My first attempt at hazard stripes can be seen as well, thought I'd try small scale first. The pipework has been painted Boltgun Metal and Brazen Brass before getting a Badab Black wash. The panel lines have also received a wash. 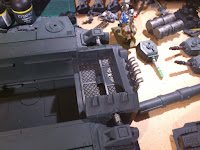 Here you can see the detail of the troop section, just a simple drybrush of Boltgun Metal followed by another light drybrush of Mithril Silver. The eagle symbol was painted Boltgun Metal and then highlighted Mithril Silver before being washed with Badab Black, this is how I painted all of the eagle symbols on the tank. The lascannon's themselves were painted with Boltgun Metal (getting an idea on how I paint metal here) and then washed with Badab Black. Not much progress here yet unfortunately. 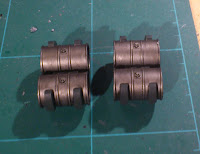 Next up are the fuel tanks. Again these have been painted with Boltgun Metal and received a heavy wash of Badab Black. They will probably get another wash, before being weathered. The mega bolter has only had a little work done, again just Boltgun Metal washed with Badab Black. I think I might have to copy and paste that sentence for everything. 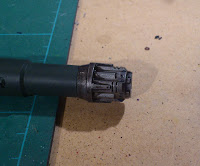 Next up is the Volcano cannon itself. The main barrel was sprayed with Vallejo Model Air Black Green, but the muzzle has received my usual metal treatment. The only difference is that I have also put a streak of Asurmen Blue wash for heat discolouration. This will be complimented with several other washes to tie it all together. The barrel and muzzle will also be weathered to make them look like one piece. 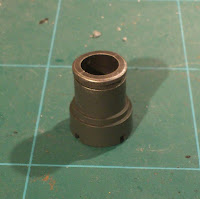 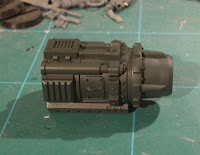 And finally, the other weapons, including the main mount. Again these have been sprayed with Vallejo Model Air Black Green. Nothing has been done to the mount, but the other barrel has been drybrushed with Boltgun Metal followed by Mithril Silver. Like the Volcano cannon, this barrel/muzzle will also be weathered.

So that's as far as I've got with painting so far. I'm looking forward to getting onto weathering, as I have got myself some ForgeWorld powders to use. Thanks for reading, and feel free to leave comments and suggestions. Cheers.
Posted by Cadian 127th at 21:06