There has been one project that has been staring back at me, languishing at the top of my display cabinet, that I chose to add to over the past couple of weeks. I grabbed the Mega Bastion off the shelf, gave it a quick dust down and grabbed some paint. This was also going to be a chance for to try out another of the stencil designs from Anarchy Models. Read on to see what I've been up to. 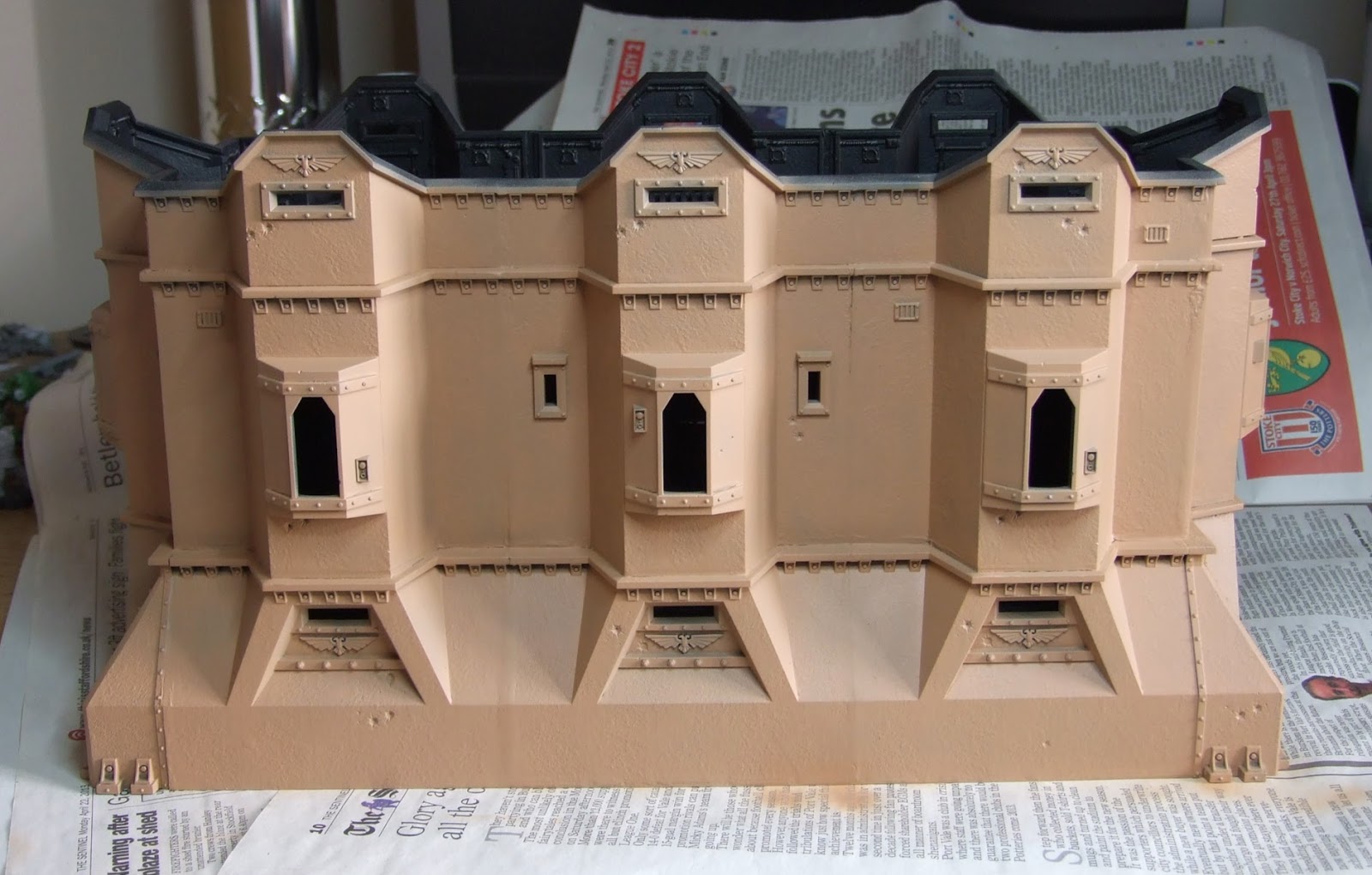 The Mega Bastion was left with just it's black basecoat and I haven't done a single thing to it since. I haven't even touched the weapons or additional little details (and still haven't). So the first thing was for me to break out the paint for the lightest of the colours, this was VMA Tan Earth (079). 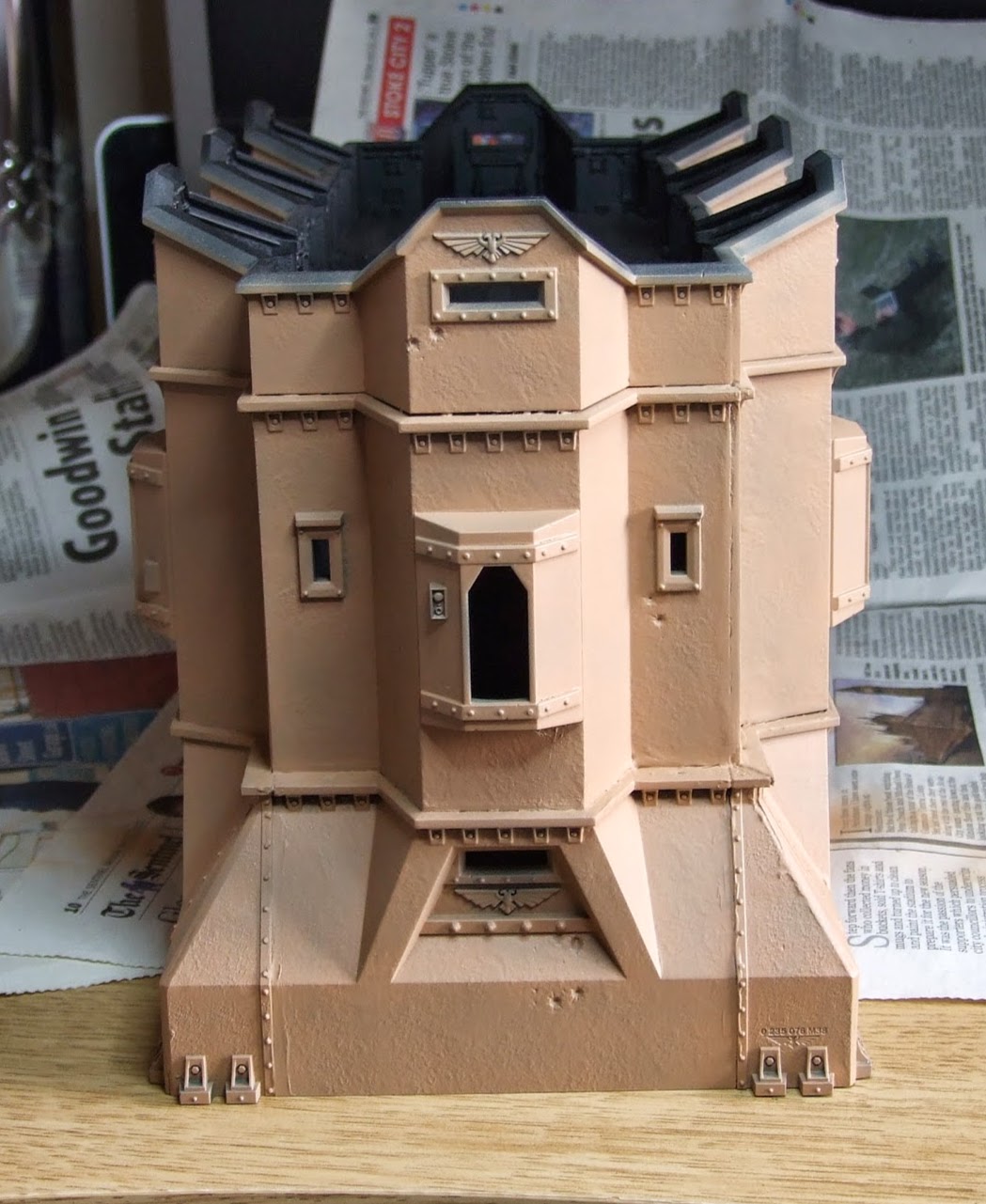 The whole Bastion received a few light coats of this using the airbrush so I could get in to all the nooks and cranny's. 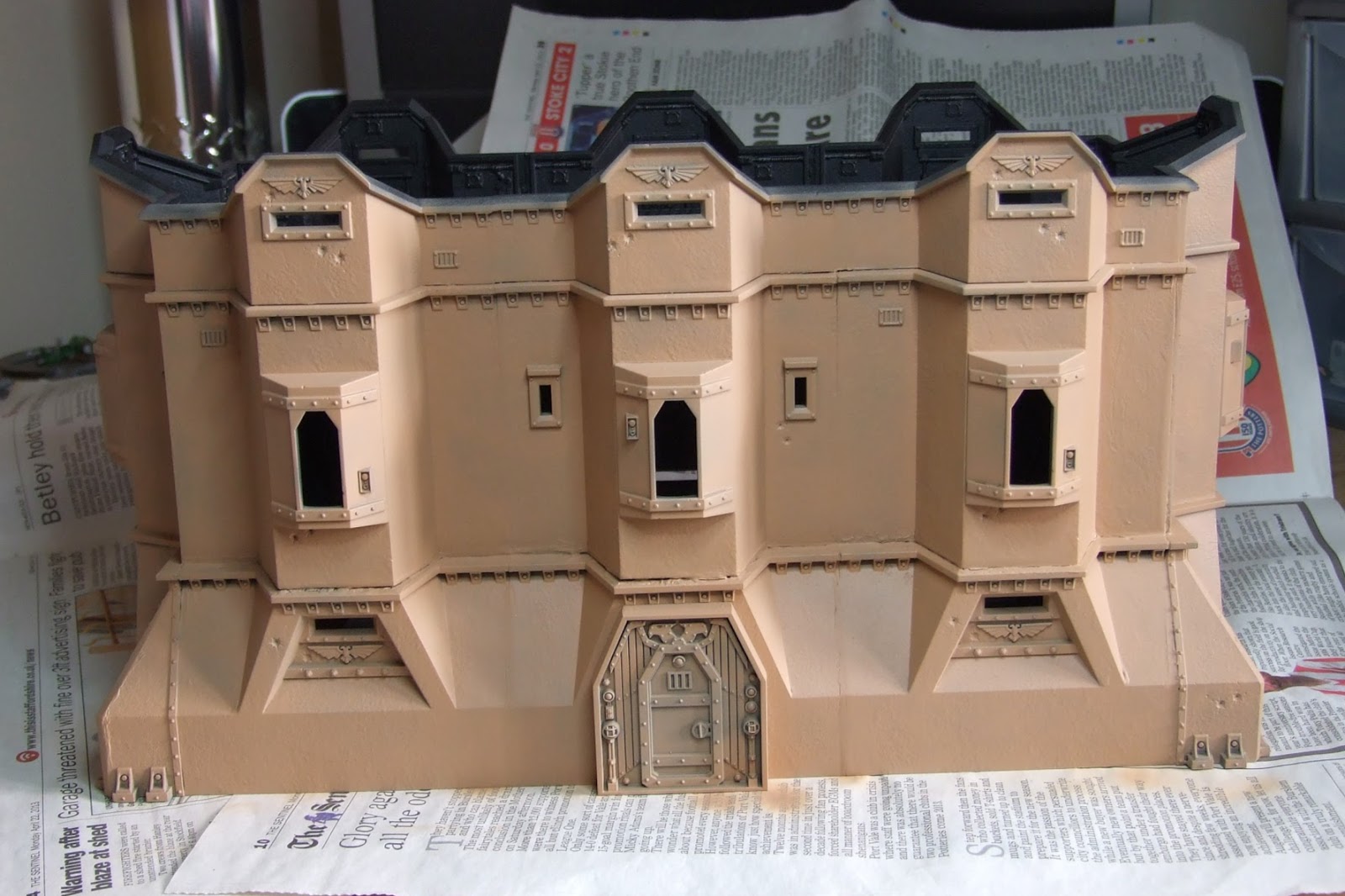 If I ever paint something this big again and know I'm going to be using a light colour to start, I will probably basecoat with grey as it took about 4 light coats to get good coverage. 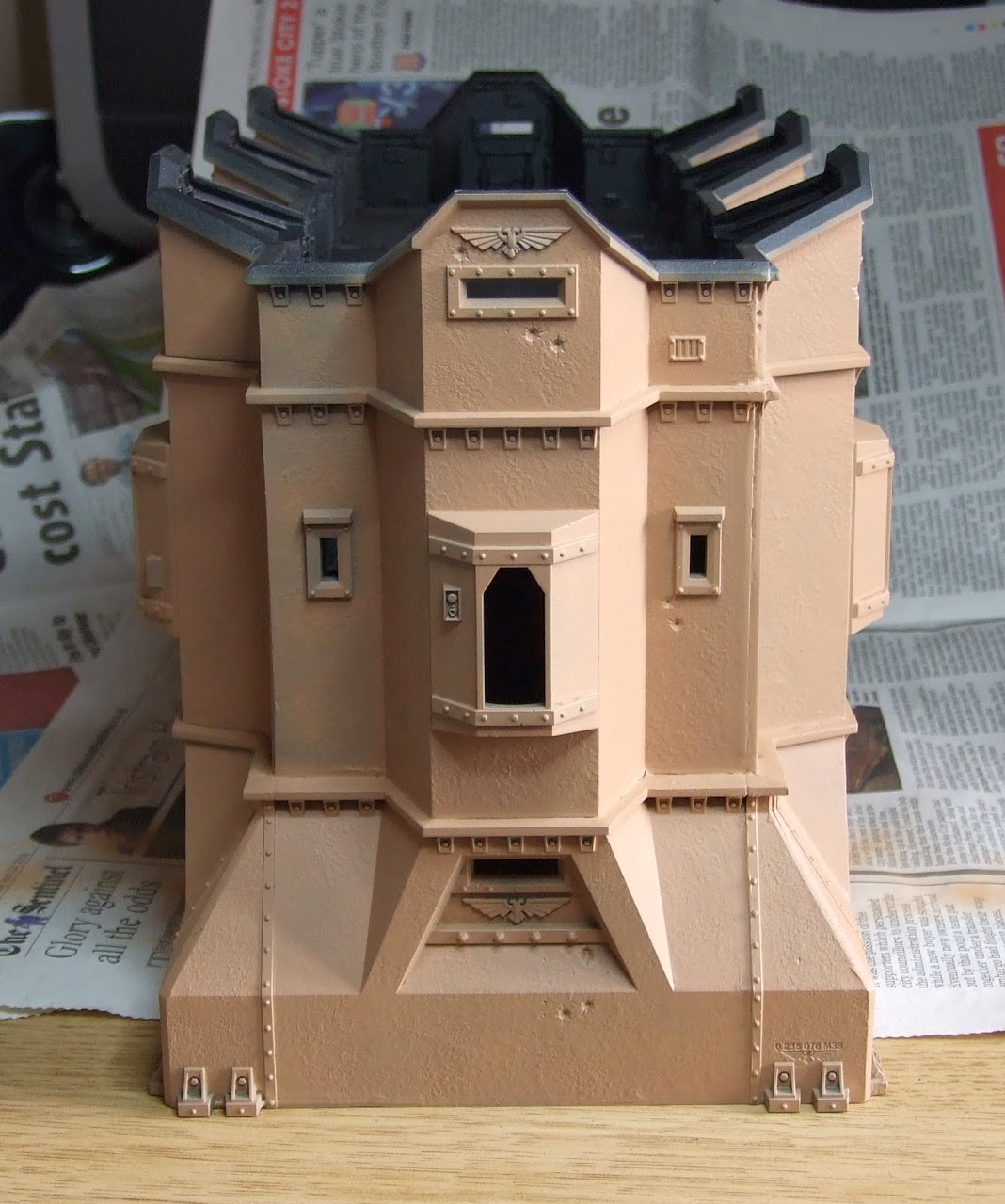 I also figured that it may be worth me deciding where I want the stencils to go so I only apply the lightest colour in those spots. This could save me time and money as I would obviously be using a lot less paint. 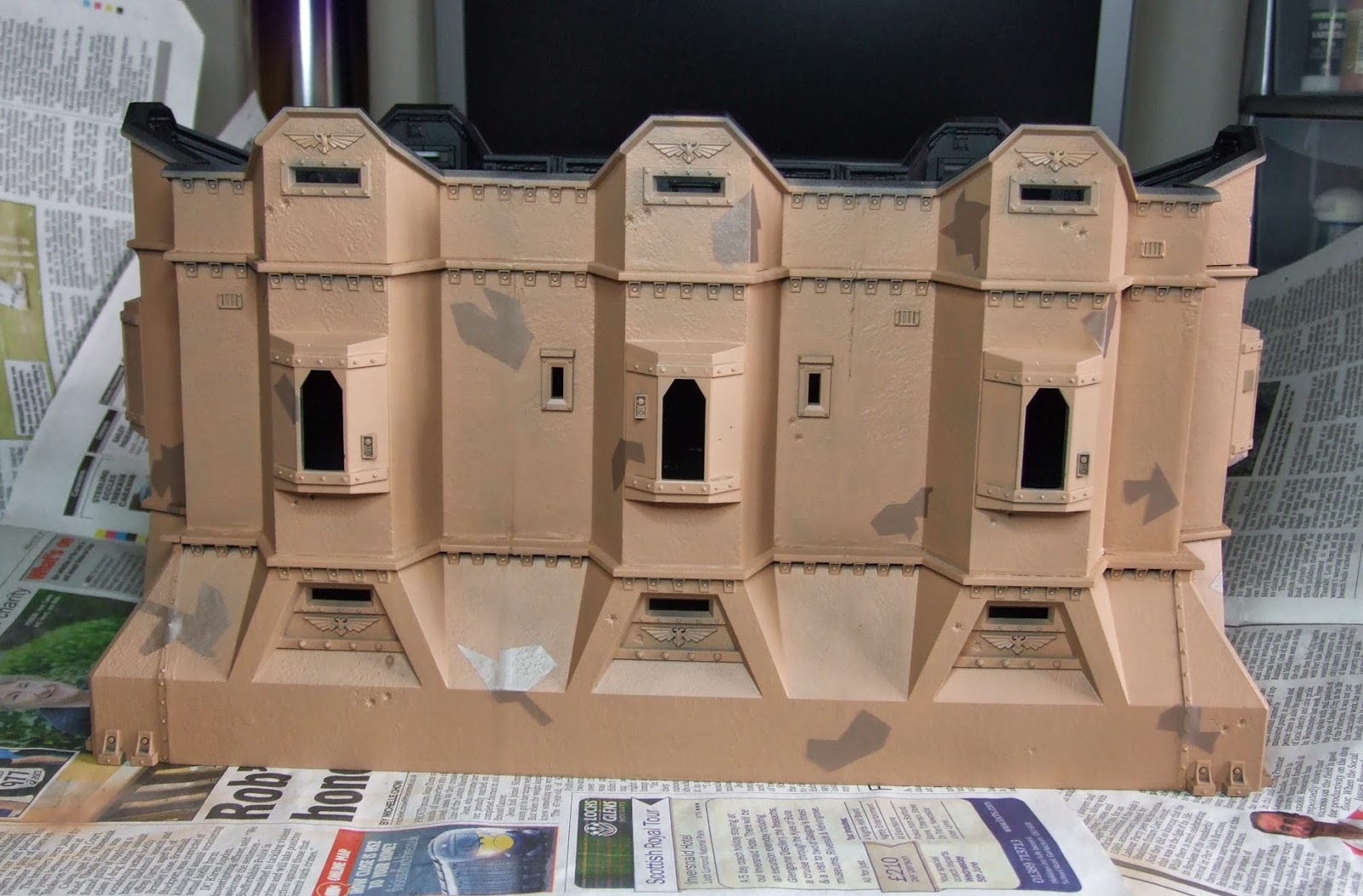 For this project I grabbed the Shattered design stencils that I chose in my package from Anarchy Models. I was trying to get a finish that looks a bit like dazzle camouflage similar to the finishes on some warships in the first half of the 20th century. 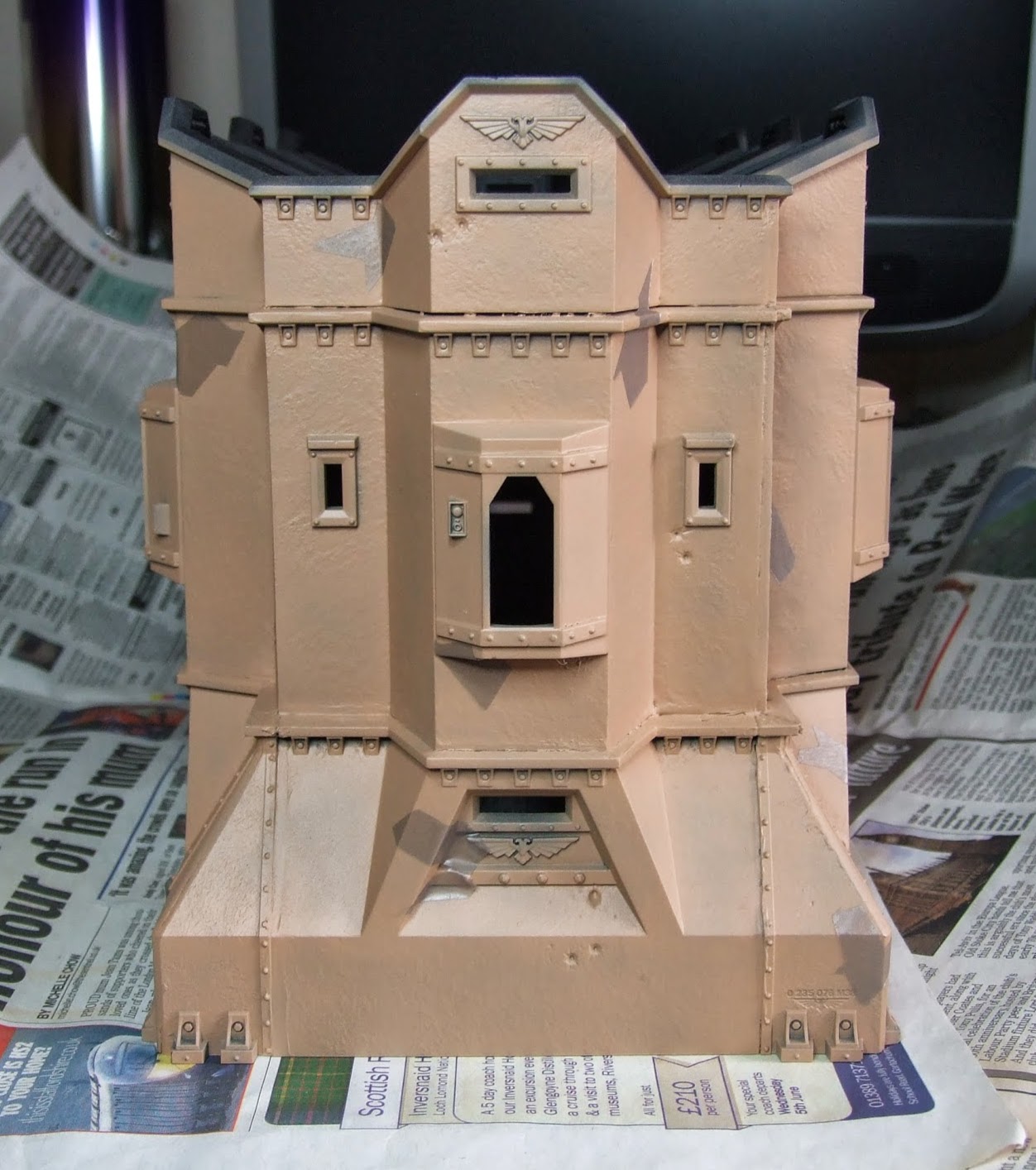 The idea is to use a similar idea to break up the large outline of the Bastion so that it doesn't look quite so much like a giant fortification sticking out like a sore thumb. 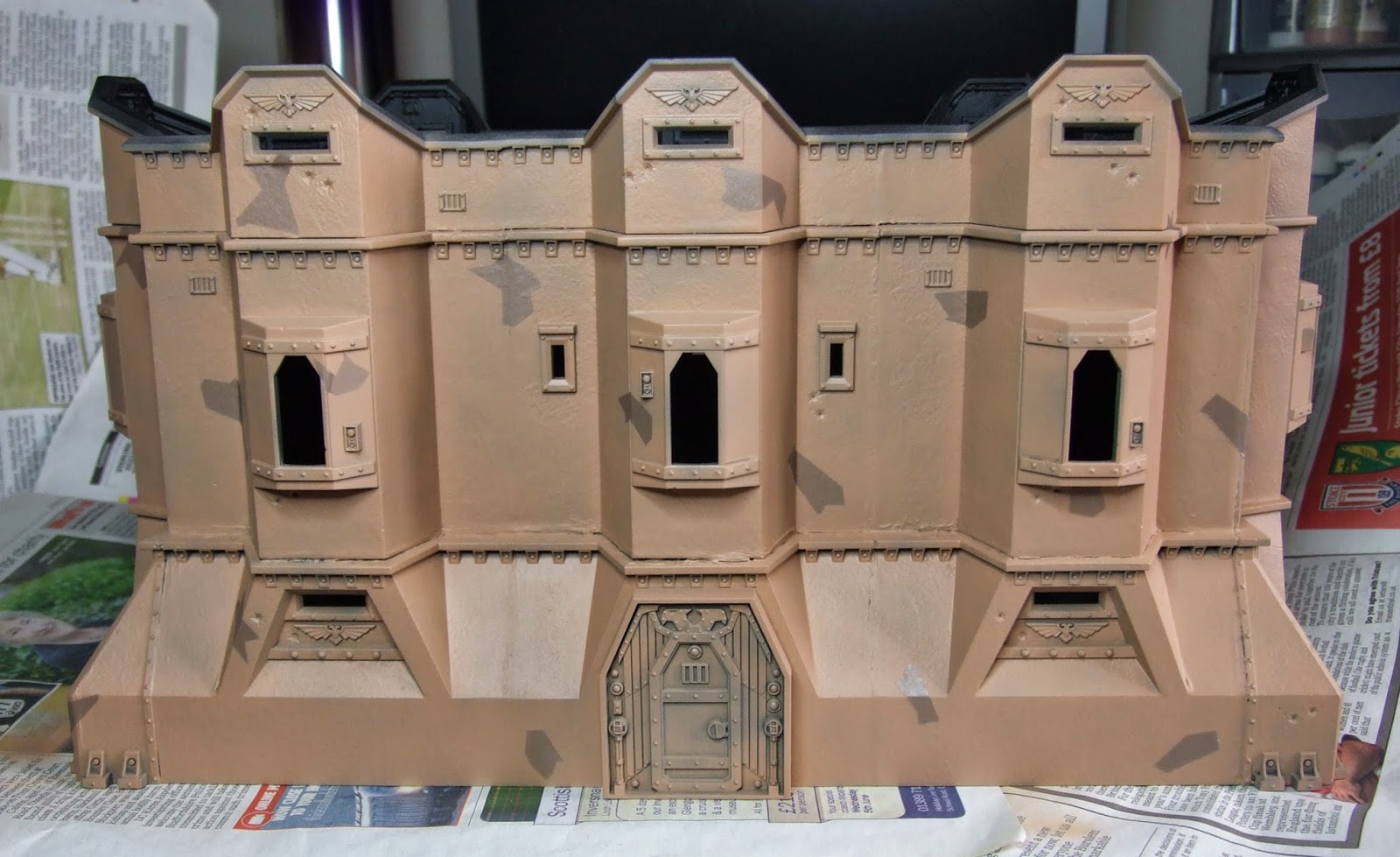 I started off with the smaller of the stencils again. I only want a small proportion of the VMA Tan Earth (079) to be on the final model. Plus I'm still not convinced by the colour itself. I'm not sure it works with the two greens I use for the primary colours. 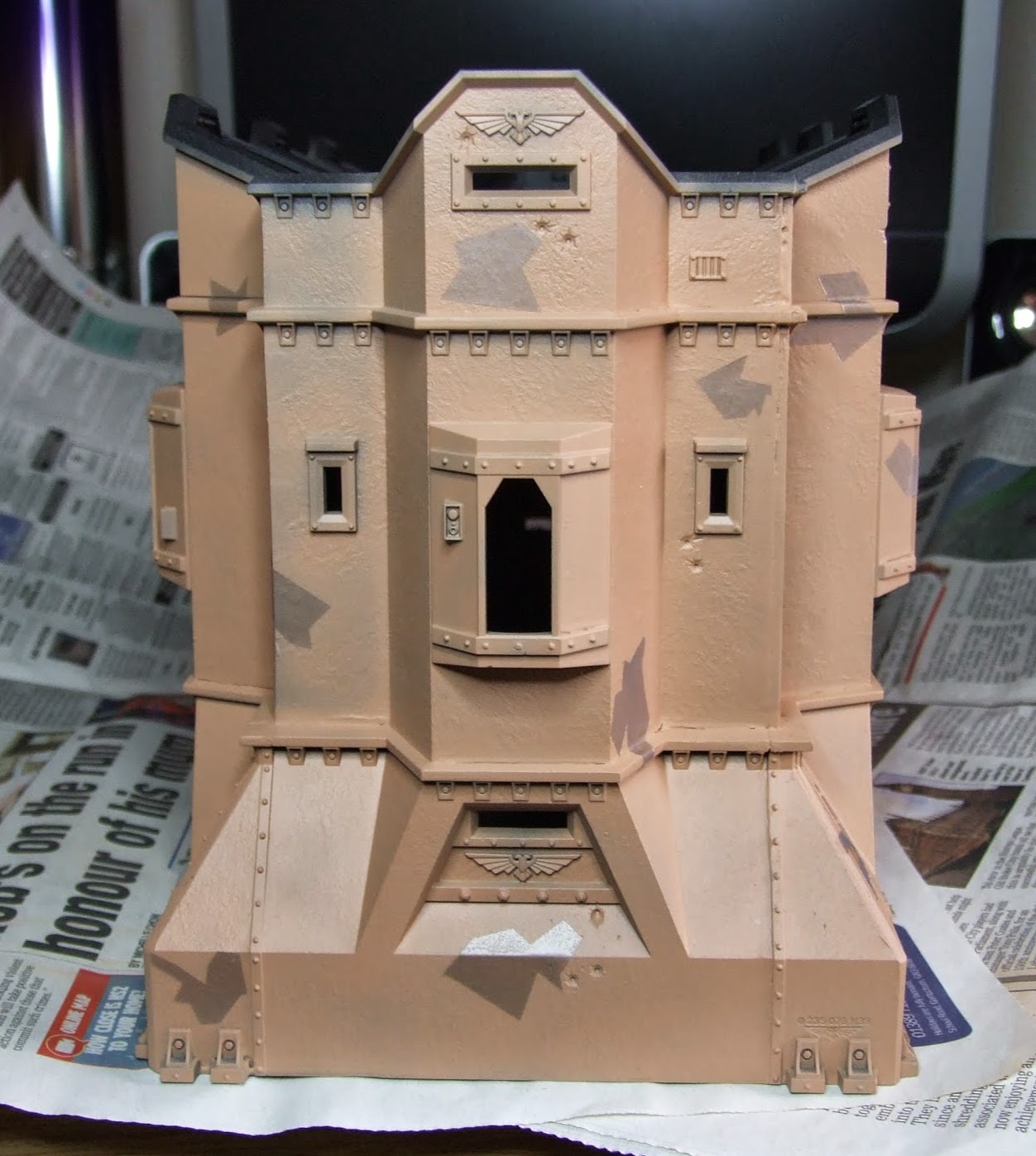 I tried to apply the stencils as randomly as possible and also aimed to spread them over certain bits of detail. The stencils went down well and I took more time to make sure they were well and truly pressed down in to all the detail. There were a few bits which covered over multiple angles which had to keep being pressed down between coats. 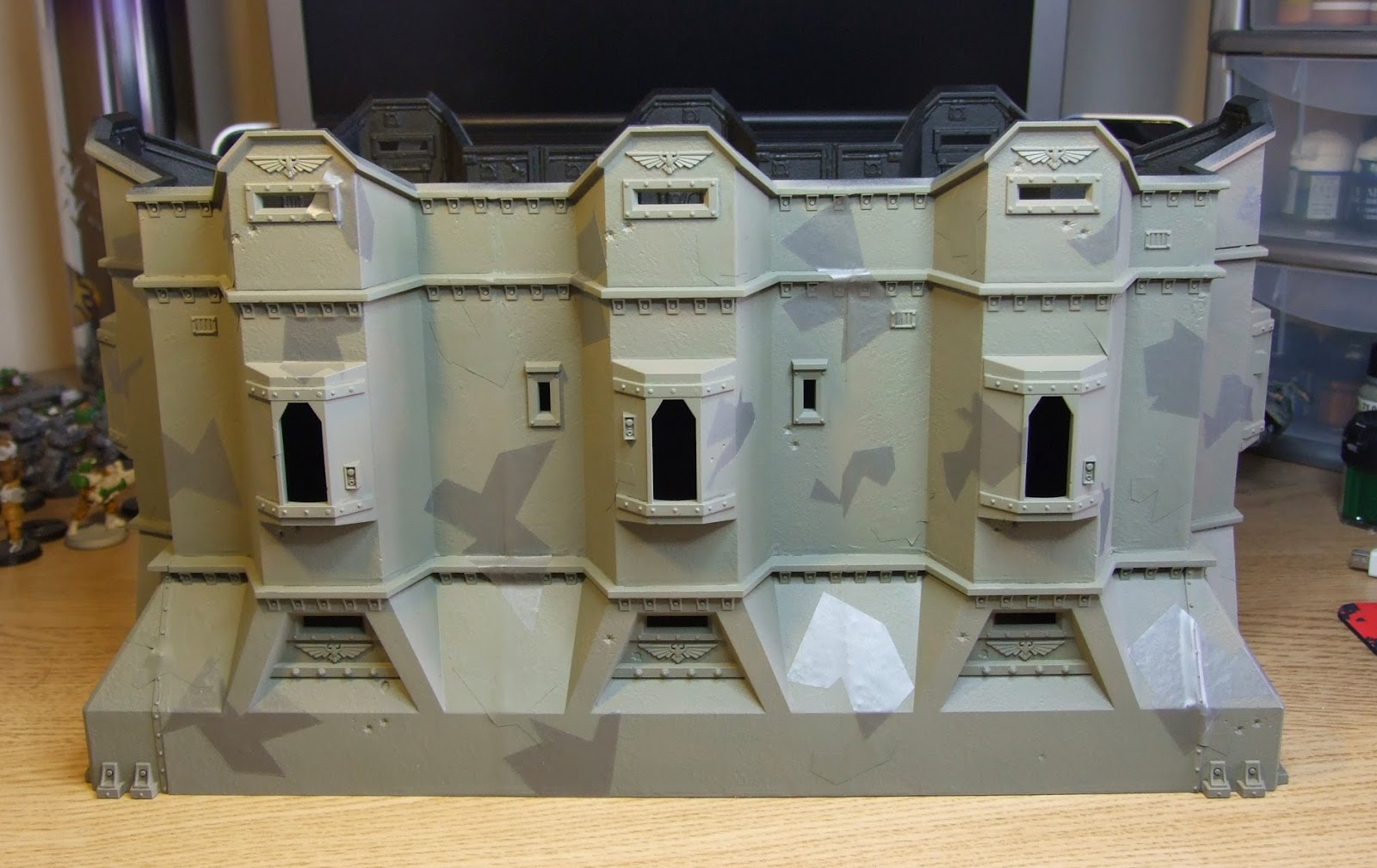 I then had the fun task of spraying the whole thing with VMA Light Grey Green (044). Once again this took several coats. I did experience a few issues with my airbrush clogging with this colour which slowed down my progress dramatically. 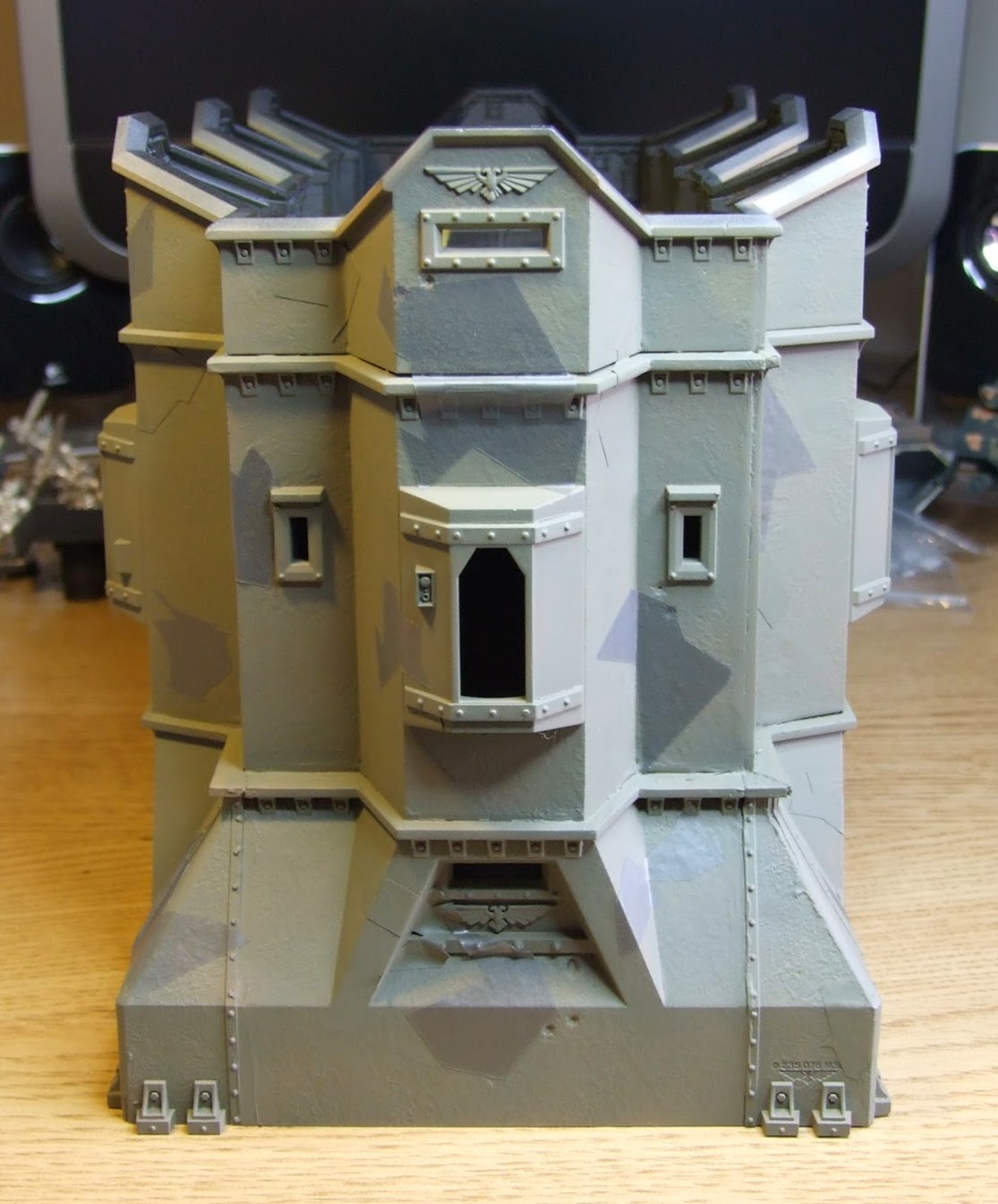 As you can see I then added a second layer of stencils to the Bastion, leaving the previous layer in place. 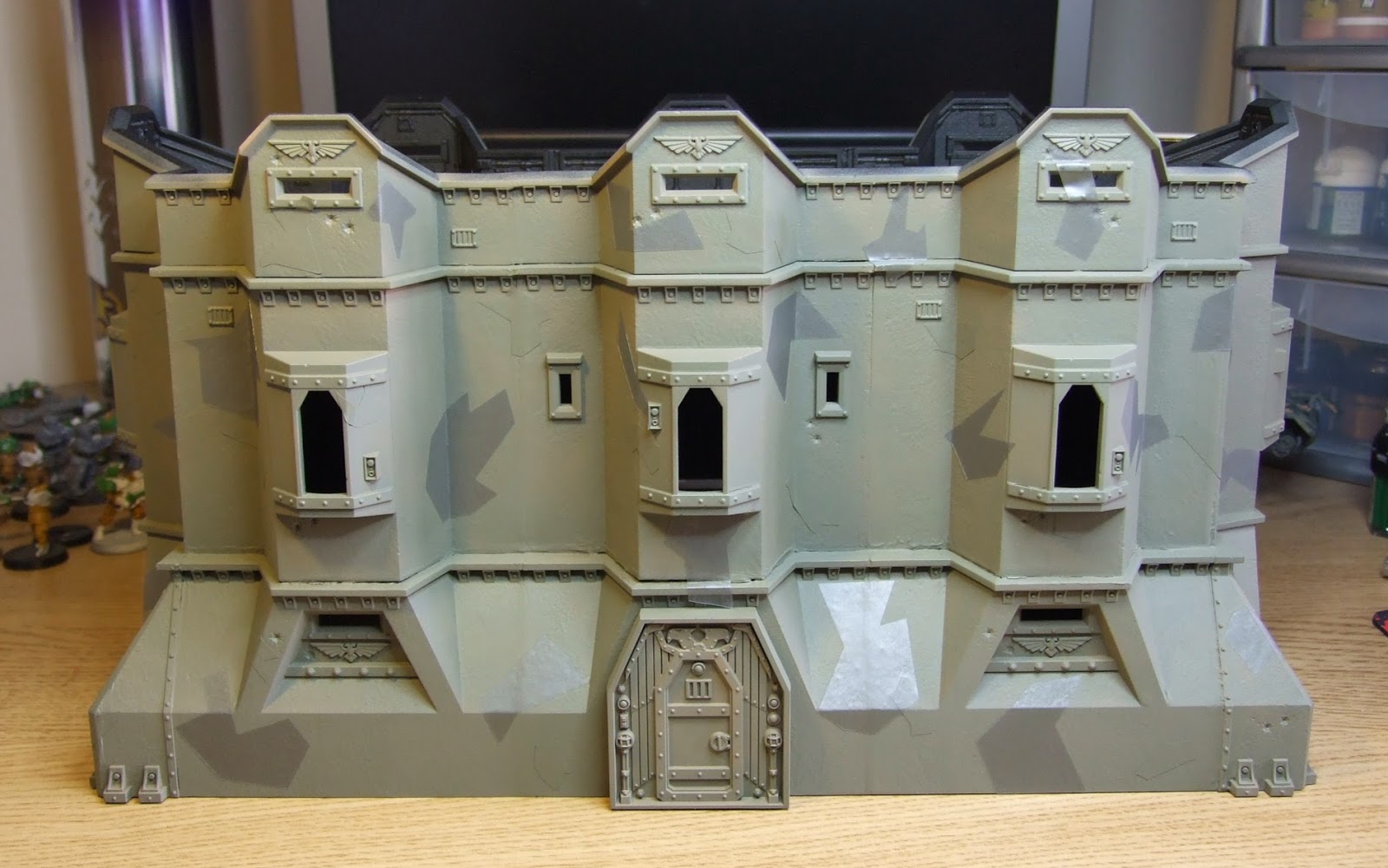 This time I used a mix of the small and large stencils, and also tried to keep a fair bit of space between them. 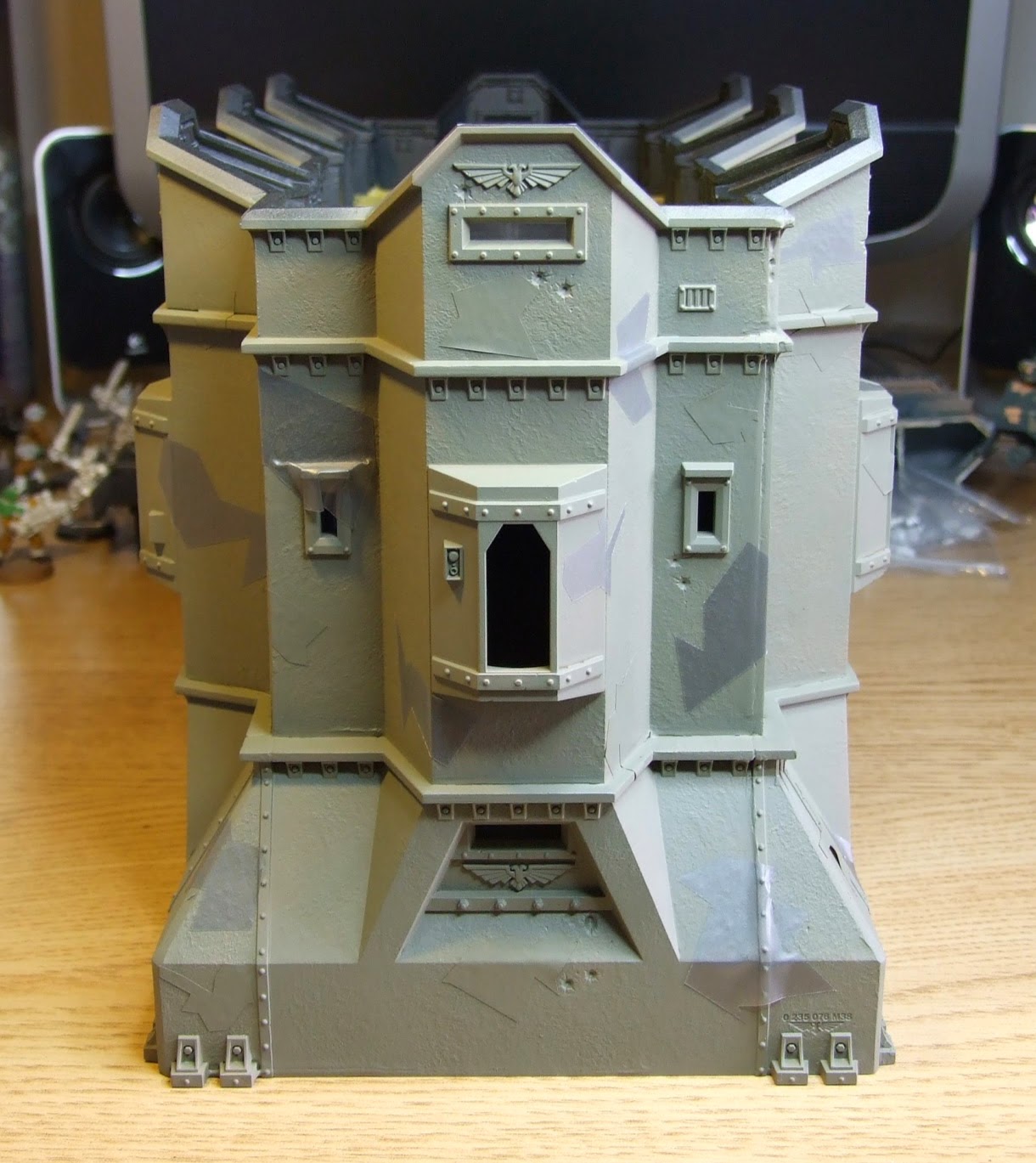 I also tried to overlap a couple of the stencils as well to get a nice bit of variation in the scheme. 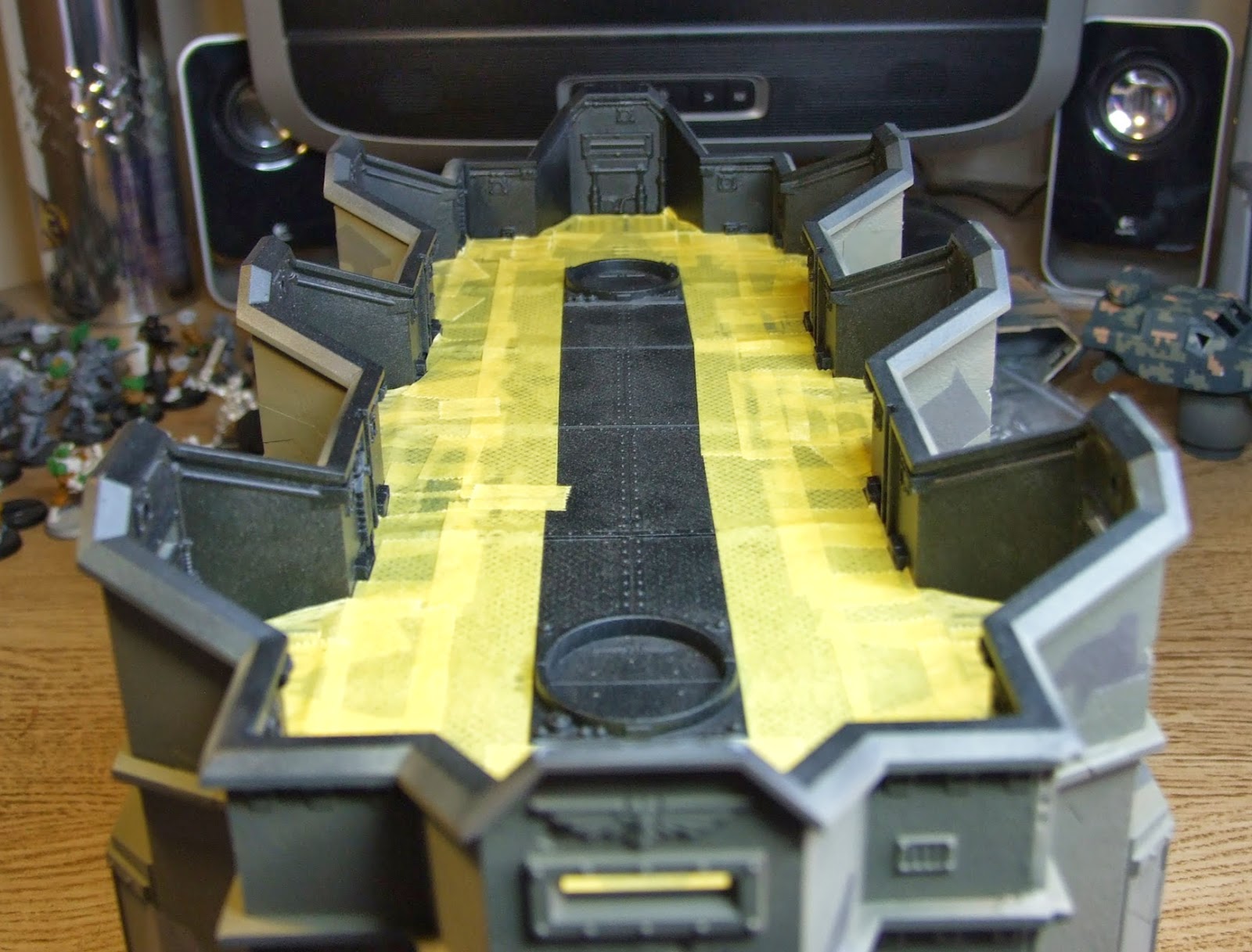 Before I started on the final colour, I masked off most of the roof area, as I wanted the inside of the parapets to be the same as the final exterior colour.

I only had enough time to lay down one coat of the final colour, which is VMA Black Green (021). Once I've got a few more coats applied, I'll upload the rest of the pictures and then you can see the final result.

Thanks for reading, and I hope you pop back to see the reveal of the camo scheme.
Posted by Cadian 127th at 13:54