This is going to be a review of the new stencils that Anarchy Models brought out through their Kickstarter. I've only had a chance to use one design but I have got plans for the other stencil designs. I tried them out on the Nova-Rus Bear from Antenocitis Workshop, so read on for my view on the Digi Camo (No 2) stencils.
For those who didn't have a chance to see the Kickstarter, or maybe saw it and decided not to back it, Anarchy Models designed self adhesive, low tac stencils which are designed to be used with an airbrush to provide a consistent way of creating a design. The sheets of stencils contain large and small versions of each design so you can get a good mix of designs.

The stencils can be re used a couple of times, and so far I've only had to chuck one single design piece away (this was probably more my fault than the product). The stencils are slightly translucent so you can see both the stencil you are using and also any ridge detail underneath once applied. They are also slightly stretchy and conform relatively well over uneven surface. So far I've found that you have to be quite hard and aggressive when pressing them down as they can lift back up, especially if being used on an uneven surface or after they have already been used once.

Enough talking from me, it's time for some pictures and my attempt at digital camouflage. 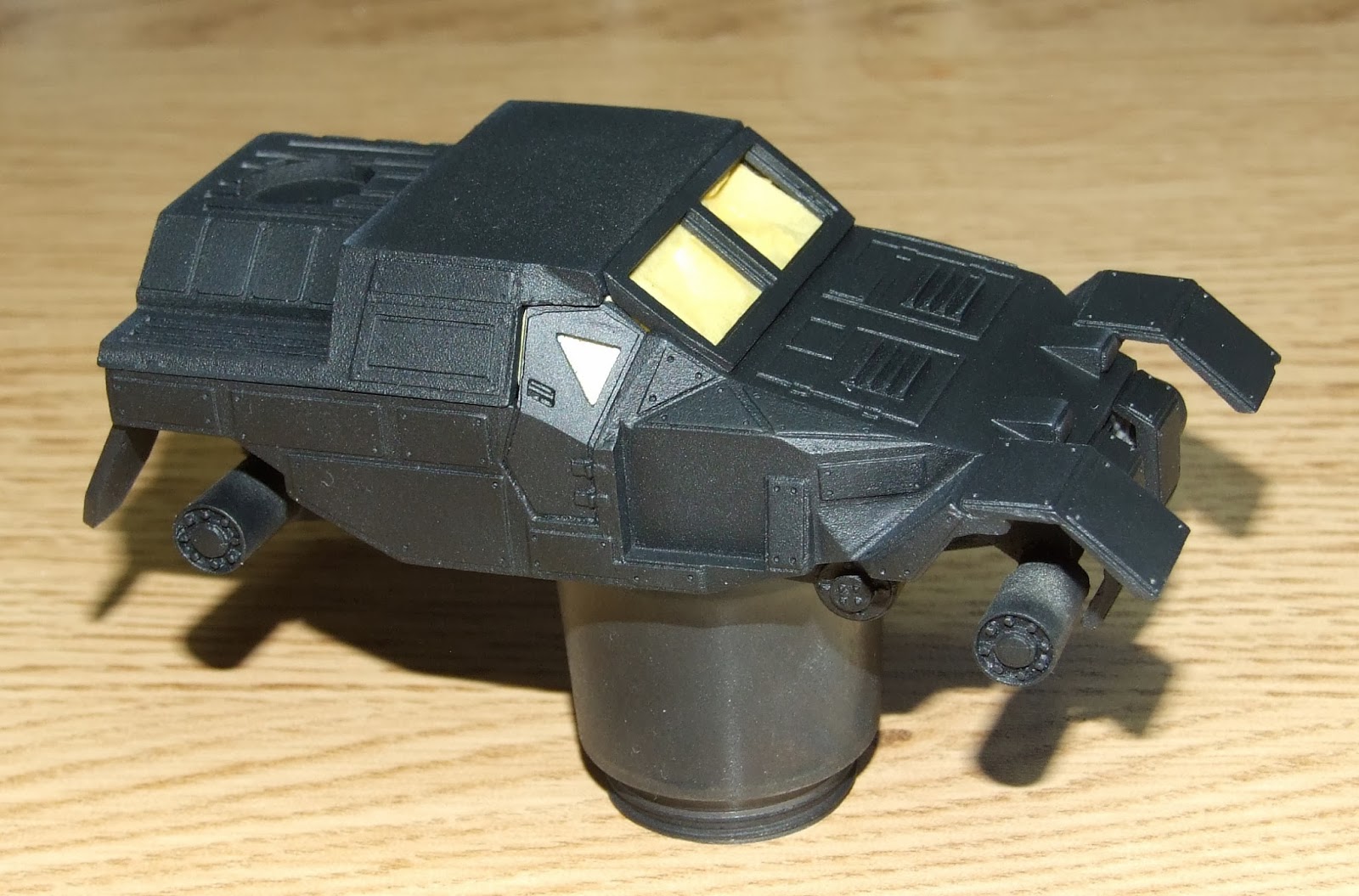 So hear is one of the Bear's assembled and undercoated with Vallejo Black Surface Primer. I've undercoated the interior, and then masked up the windows so that I can paint it later. The roof has not been glued in place.

As per usual, I managed to forget to take a photo of a stage (I even thought that I had taken one!). The stage that I missed out was spraying on a coat of VMA Tan (several thin coats to be precise). I covered the whole vehicle with this, though in hindsight you could probably just spray it in random areas where you want this colour to show. 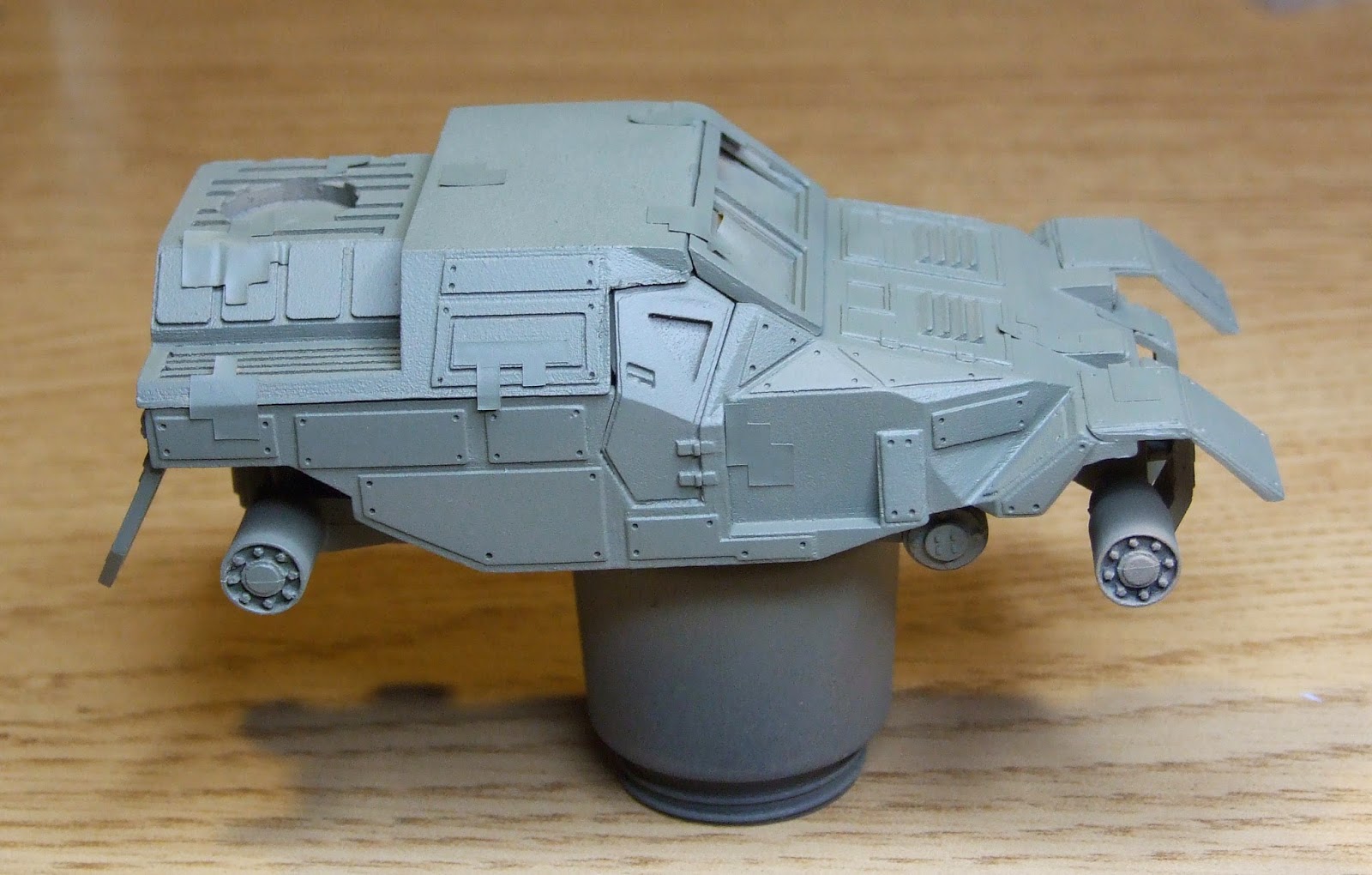 The next stage was to start laying down the stencils. The colour underneath the first layer of stencils will show through all other layers. As I only wanted a small amount of the VMA Tan to show, I used the smaller digi camo stencils and laid them out randomly. Following the advice from Anarchy Models, I left some quite large gaps between the stencils. With them in place, I sprayed on several light coats of VMA Grey Green, which can be seen above. You can also see the outlines of the stencils.

It's worth noting here that several thin coats are definitely necessary so that the paint doesn't seep underneath the stencils. Also you can get a much smoother coat if you use multiple thin layers rather than one heavy one. I've learnt this the heard way.

Again, I didn't take any photos of the next stage, maybe I'll remember the next time I use them. But the next thing is to lay down your next layer of stencils. This time I used the larger ones, as I wanted more of the VMA Grey Green to show. Don't take the other stencils off, just lay the new ones over them if you want to. Again leave some spacing around the stencils as you want to have a good bold camo line.

So to give you an idea of the results you can get, here are some pictures of how my "Bear's" turned out: 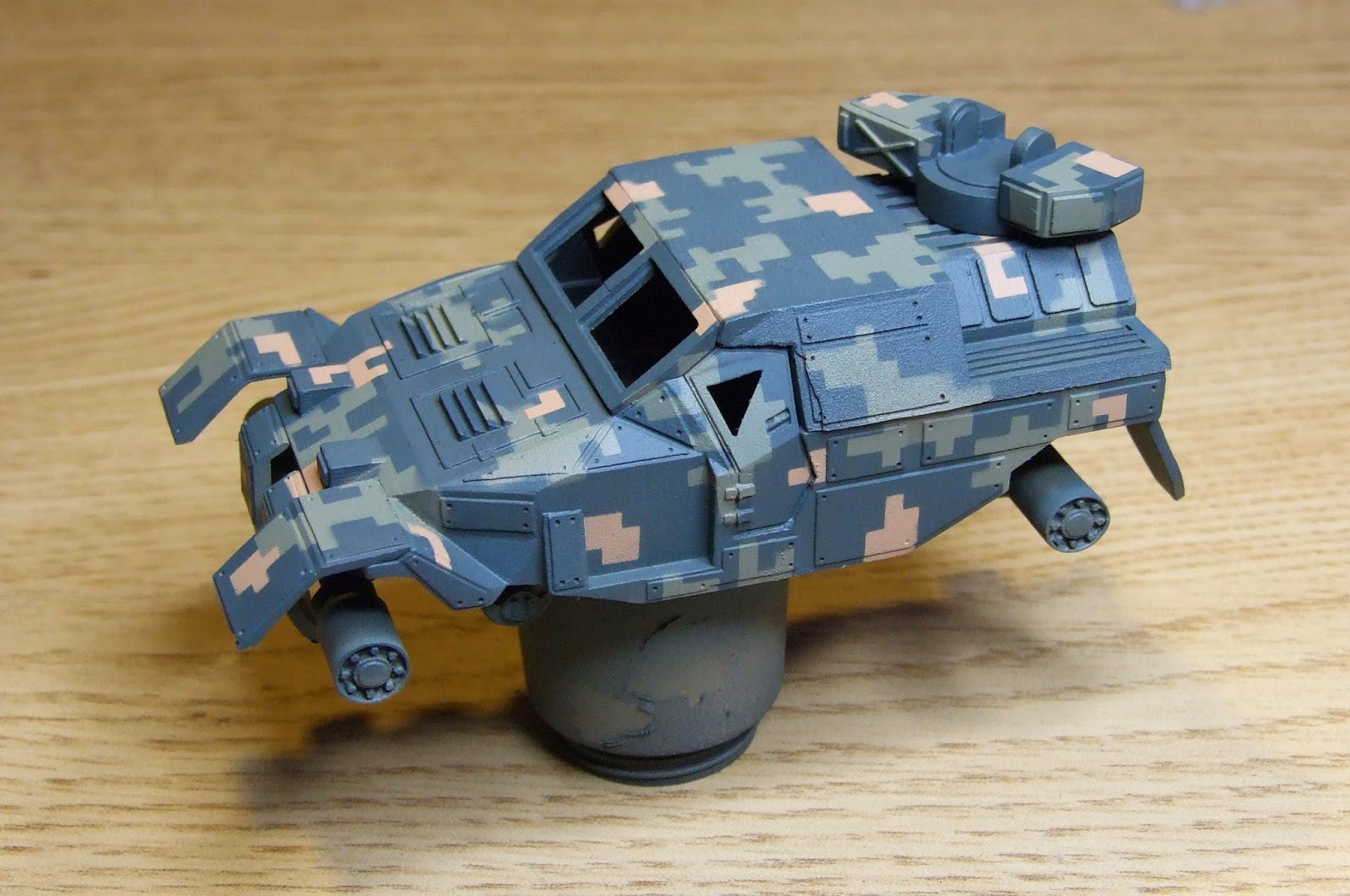 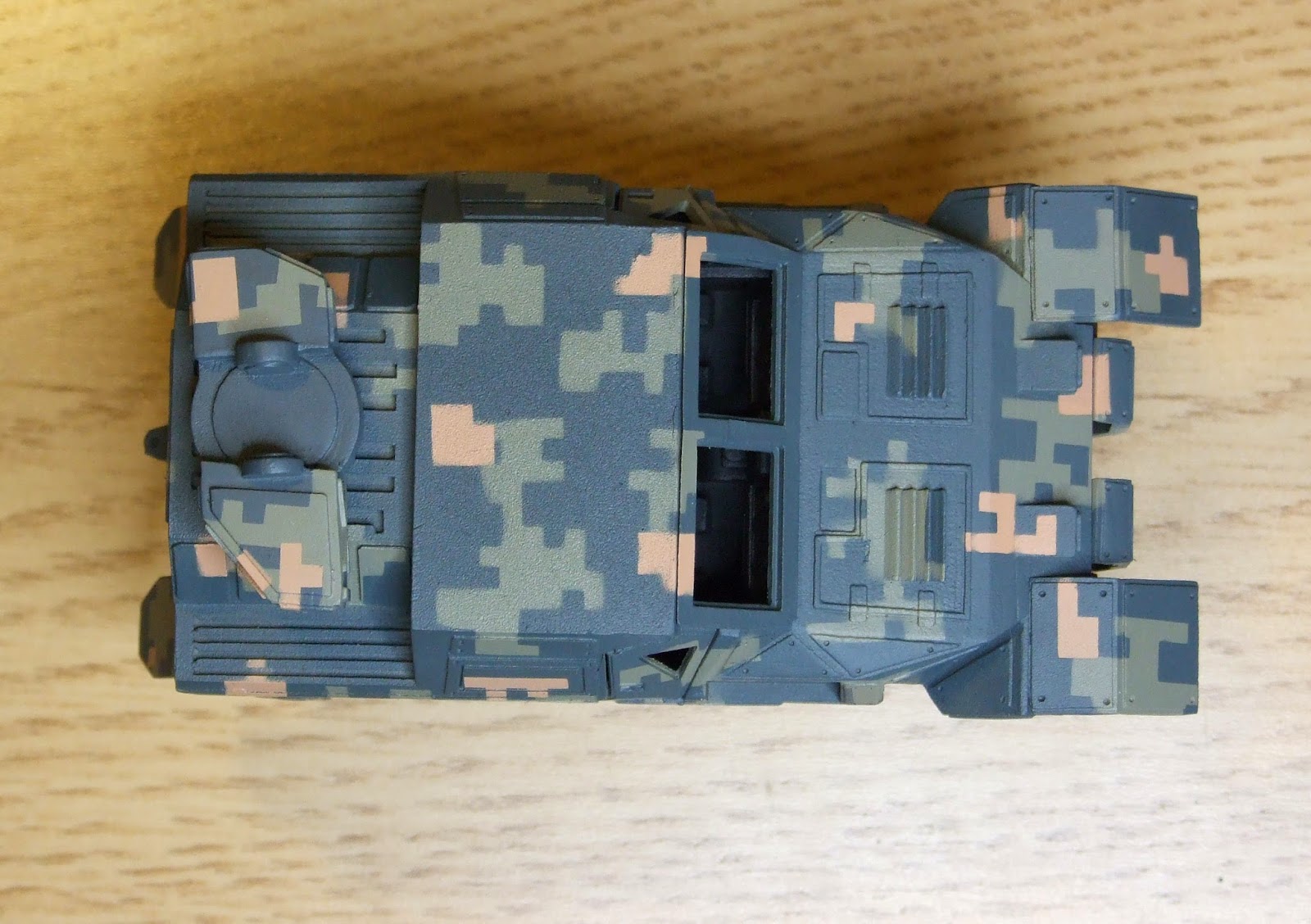 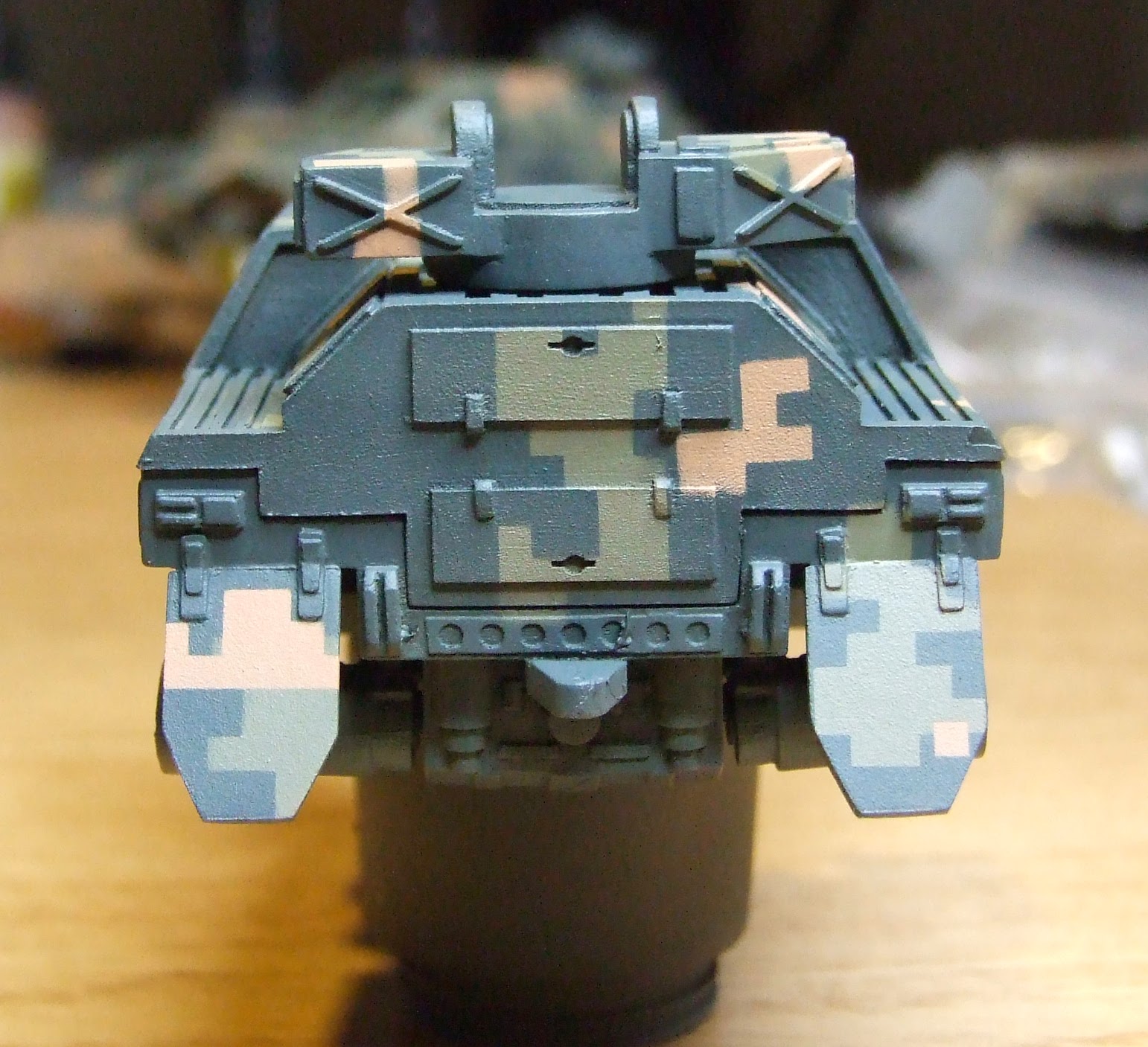 I had a few areas where the stencils weren't pressed down completely, so there are some edges that aren't as crisp. A little bit of weathering will help to cover this up.

Overall, I'm really, really impressed with the stencils. Anarchy Models have done an excellent job. The stencils are easy to remove from their backing sheet, go on like a charm and mean I can create complicated patterns that I would never even have dreamed of trying.

As mentioned my only issue is that sometimes the stencils don't stick done completely on uneven surfaces. I hope this is just me getting used to them though.

If you're looking for a really good and useful product to give your army a little bit of a different flavour, then I definitely recommend trying these out.

Thanks for reading, and as always comments, questions etc are appreciated.

P.S. the mega bastion is getting pimped out with these!
Posted by Cadian 127th at 14:14

Kool. I've got a couple of these. Now looking forward to using them.

@ Zzzzzz - they are pretty cool. And soo helpful for creating good designs. Let me know when you've used some.

Oooh, I like this. If I had an airbrush I'd bbe all over stencils...

Very impressive and informative thanks for the great post.
Camo Stencils