Hi and thanks for visiting for Part 7 in this ongoing project.

The last update was all about the buildings that will be added to the layout. Todays update is about the layout itself, and a minor problem we encountered.

When I say minor problem, what I actually mean is a major problem that meant we had to remove around a third of the outer loop from the board. The cause of this major issue was the angle of the inclines. We calculated the ratio of the incline before we started and then based everything around it. Track was added and then we tested the incline. However, we only tested the incline using a little 0-4-0 shunter with one carriage. The shunter worked fine, but when we started using the larger locos, they would not go up the slope. 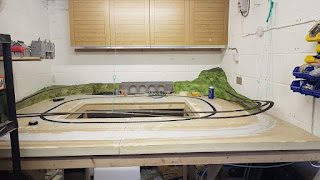 So drastic measures were needed. The first of which was to remove the track from the offending areas and safely secure it before commencing repairs. 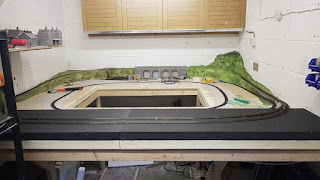 The repairs came in the form of an inch thick sheet of polystyrene. We had checked that this would decrease the gradient enough for larger locos to make their way up. 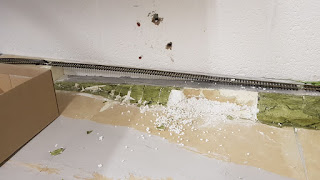 The inclines then got hacked out for the track to be raised. 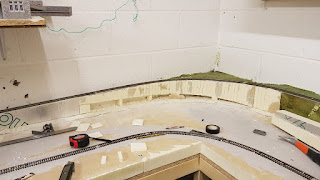 And the curved sections were raised too. 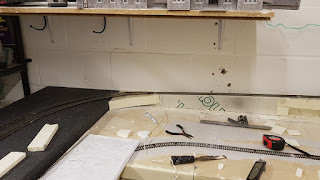 The blank spaces were filled in with celotex. 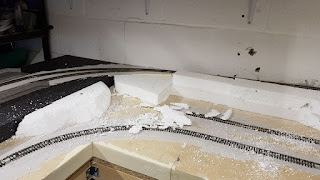 Polystyrene was used to create the landscaping for the new sections. 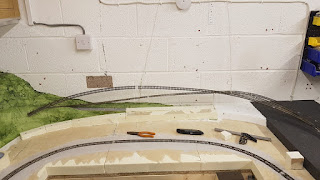 The process was repeated on the other side. The siding was also raised, but has a slight downward slope away from the main loop. 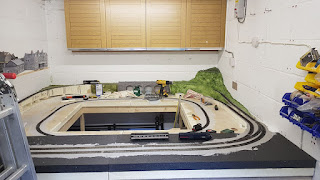 Minor disaster now over. We used some grey tinted fine fill and relaid the loop. 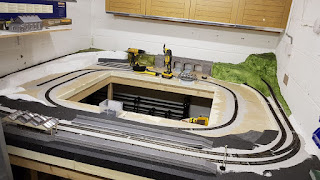 Now it was just a case of trying to blend the new sections into the original base. We're so lucky that celotex and polystyrene can be cut and shaped. It allows us to add in the ramp on the right side and attempt to cover up our mistake. However, it's all a learning curve and this is only the second layout we've done and the scenery is a bit more complex than the first.

Thank you again for stopping to check out the update.

If I don't manage to get another post out before Christmas, I wish all of you and your families a Merry Christmas and Happy New Year!!!

Nice recovery, and I guess this is more of a “adventure on the journey” than just the finished article. Enjoy the build and Merry Christmas

@ Siph - thanks, the recovery was a bit lucky, a bit skillful. Have a good Christmas.