Hello once again and thank you for taking a look. If you haven't seen the rest of this project/adventure, please have a gander at the previous posts:  Part 1, Part 2, Part 3 and Part 4.
Before I start going in to the details of this update, please take a look at this blog. Ginge, at Need More Tanks...Always is helping to raise money to support a friend's family following some bad news. They are asking for people to make a donation. Oh and you could win a fully painted Cerestus Knight!

Right then, on to the tracks! Even though we had the main layout sorted, there was still the small problem of the marshalling yard. We had a rough idea of how many sidings we might fit in but didn't really know if it would work. Originally there was a plan to fit a turntable in as well because they are awesome! But the space wasn't quite big enough when you add in the sidings and engine sheds - maybe a future addition if my dad get's rid of the giant cupboard in the corner. 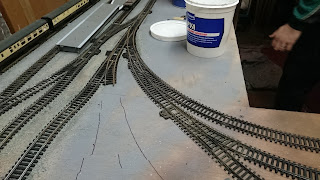 Anyway, here is where one part of the marshalling yard starts. To begin with we had to add an extra set of points to the inner loop - this is the set with the track attached on the right of the picture. The extra points allowed us to push the sidings really close to the edge of the board and then fit 4 more sidings in. 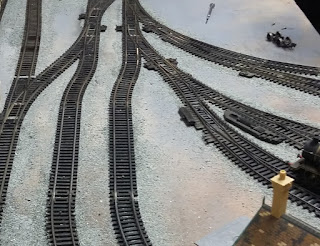 Here you can see the second set of points running off the inner loop (and the points between the mid and outer). You can also see the split to the four sidings which was created using a normal set of points followed by a curved set (for 2 sidings) and a normal set (for the other 2). This picture was taken a smidge after the rest on this post. Unfortunately, I didn't take a photo (that I want to show you) of the rest of this siding - that one will be kept until the big reveal! 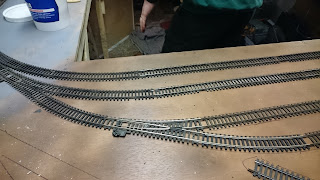 This is the bank of sidings closest to the table edge. We used a curved set of points followed by a regular set of points to get the first two long sidings. This was then followed by another regular set of points for the next two. You'll see how long these sidings are in the next pictures. this will be where the passenger coaches will get stored. There will also be a PECO rerailer on one track which will allow my dad to add locomotives and rolling stock to the track even with his reduced eye sight. 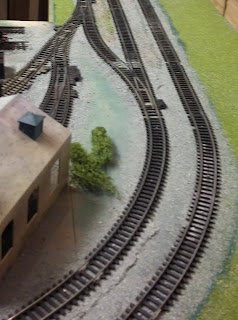 Switching to the other side of the tracks (ba-dum-tiss) is the next set of sidings. Here you can see the mess of points leading to the rest of the marshalling yard. To create this chaos, a normal point was added to the bypass track on the inner loop. This was then followed by another set of normal points in order to fit the engine shed in. A curved point was added two loco's can fit in the shed. It all looks a bit messy but loco's etc will only be travelling at low speed across this section. 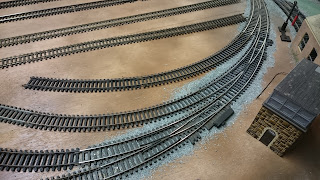 As well as the engine shed, there are another 4 sidings. These have all been created using curved points and short sections of curves and straights. 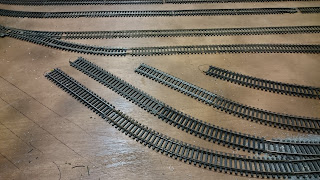 These are quite a bit shorter and are more for rolling stock and loco's. At this stage we were still adding the ballast and making sure there was enough spacing between everything.


With the marshalling yard all laid out and ready, the final prep could be completed to actually get some trains running again. We tested each loop individually and then tested running a train from one loop across the points to the next loop. And here we hit a little bit of a snag. 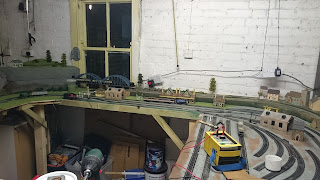 Out came my dad's multimeter, which looks more like a geiger counter, as we attempted to find out where we had messed up. Well it turns out that my brother-in-law had checked the electrical connections "extensively" while wiring them up, 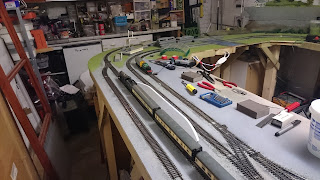 In the picture above, you can see the two cables that run between the swing out section and the rest of the board. Unfortunately, these were wired up incorrectly. They should have connected up each loop back to itself - outer to outer, mid to mid, inner to inner. However, what we actually had was more like outer to inner, mid to mid, inner to outer. This led to trains on the inner and outer running off the same circuit, so 1 controller was running 2 trains. Whilst this solved some problems, it could cause big ones later. 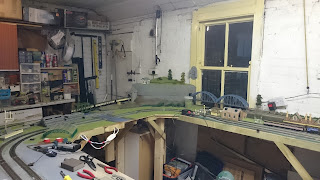 A few modifications later and the wiring was corrected. We ran a few different types of trains round and everything worked! So we left the ballast to dry in the marshalling yard and allowed a couple of trains to run. 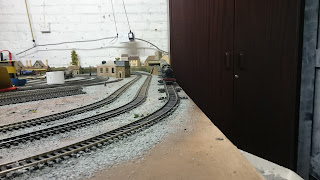 So I'll leave you with an action shot of the Dorchester Castle steaming down the incline on the outer loop by the marshalling yard. Pop back next time to see the final, finished pictures.