Just a smidge more progress on the Voss Pattern Lightning Strike Fighter. Last time round I had attempted to fill some of the gaps using liquid green stuff. This resulted in a bit of a mess - as you can see in Part 1.

I spent quite a bit of time sanding down this foul up and making sure that the surface was smooth with minimal signs of the filing/sanding. I also had to use a small drill bit to mark out the original joining holes. 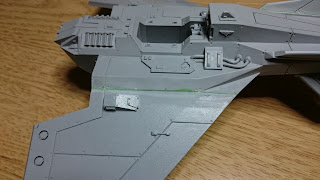 To make things a little less untidy, I used regular green stuff to fill the gaps on the other wing section. Once left to cure for a few days (just to be safe), I trimmed and filed the excess before using some fine sandpaper to smooth the join. 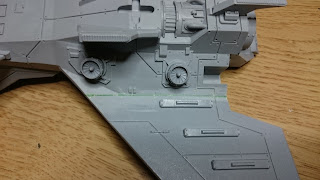 The gap on the underside of the wing was also filled. This was a much harder piece to sand down and is a little less tidy than the top. I had already glued/green stuffed the manoeuvring thrusters in place which impeded my sanding space. 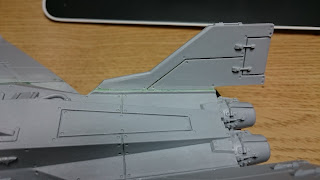 There was a slight gap on one of the tail pieces, so this also got the green stuff treatment. I'm hoping that the surface marks look worse than they actually are.

Now I'm planning on using some of my Anarchy Model HD stencils to create the camo pattern on the Lightning and I've got a choice between Hexocam, Digi Camo, Tiger Stripe, Shattered or a Classic Camo. I've used the stencils before on my mega bastion and the 4x4 Bear scout cars. This time round I'll be deviating from my greens and going for blue, aiming for something along these lines: All images used without the owner's permissions.

I've already gone ahead and bought a selection of blue's and grey's from the new Games Workshop Citadel Air range. I will update this post once I get home with the names of the paints I bought EDIT: I purchased Russ Grey, Calgar Blue, Lothern Blue and Caledor Sky. I want to see how these hold up against the Vallejo Game Air and Model Air paints I normally use - though I do see a problem of them being in regular GW pots rather than dropper style bottles, but I've ordered some empty Vallejo style ones to combat this.

What do you guys think of the blue camo schemes? I want something that will really stand out against my normal green version.

Thanks for reading and an early Merry Christmas and Happy New Year to all of you!
Posted by Cadian 127th at 13:33