I'm not sure what's been going on, but I've managed to get several models finished within a few weeks of each other. This is good news as it means that unfinished models are no longer just gathering dust, they are finished (and gathering dust)!

And that dust gathering finished model is my other Manticore. It is the magnetised Manticore as detailed in post 133. And as you can probably guess from the title, this is a special tank. 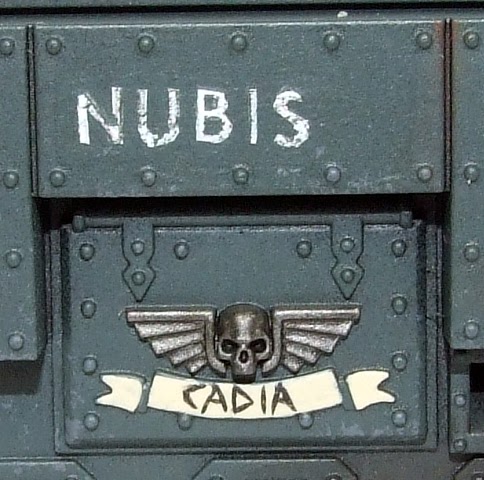 Without any more waffling on my part, here is S92 "Nubis" (Cloud). I'm going to start with the Deathstrike version. My little attempt at freehanding "Cadia" can be seen above (as well as my inability to cut out custom transfers). I have realised I forgot to put a GW Gryphonne Sepia wash on the scrollwork. 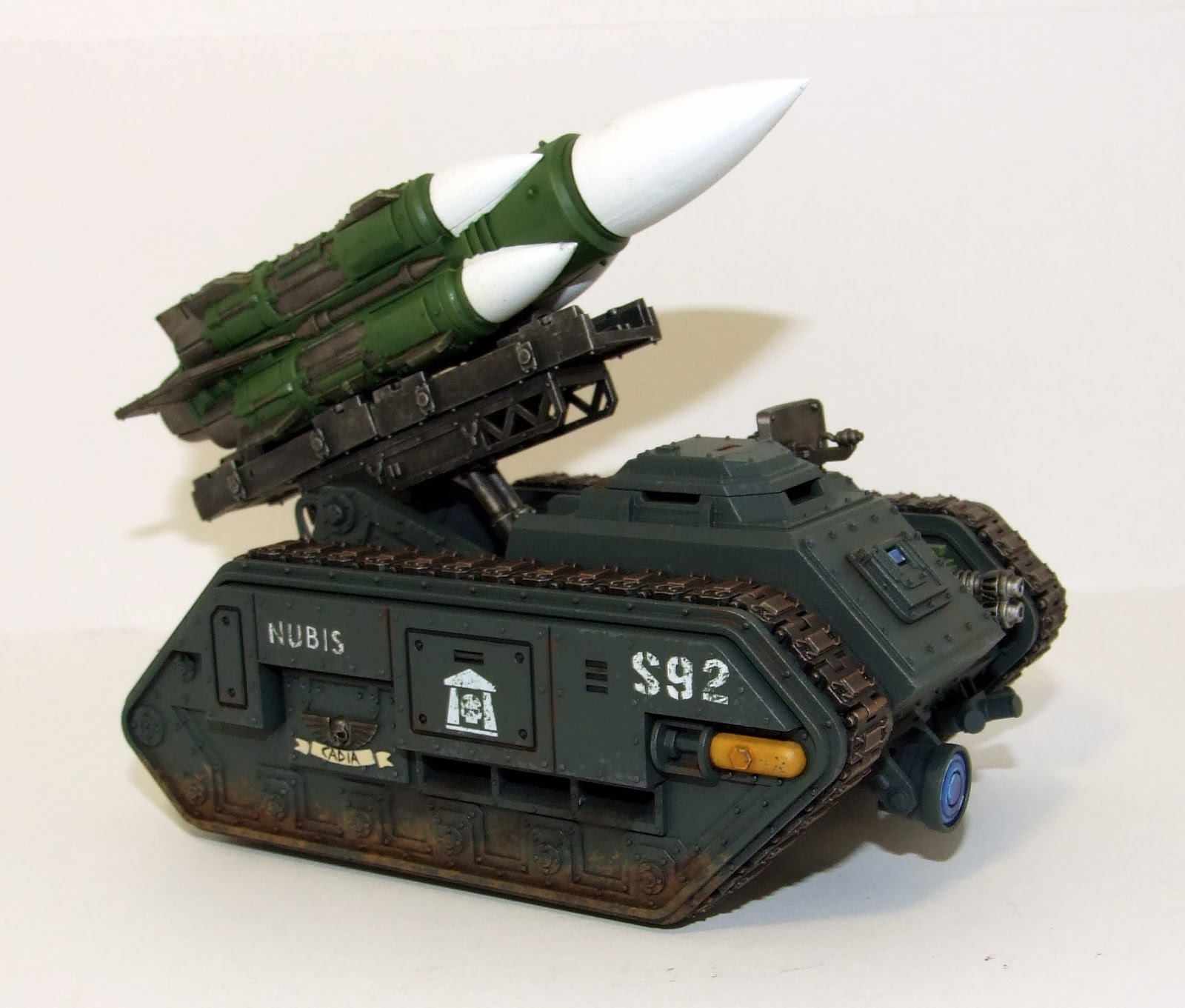 A nice shot showing the big missile of doom! My usual weathering was applied to this tank. Vallejo Model Air Black Green was sponged on over the transfers to make them appear worn. Then the whole tank got some sponge attention with GW Adeptus Battlegrey. This time I focused on the access points and areas that might get scuffed. 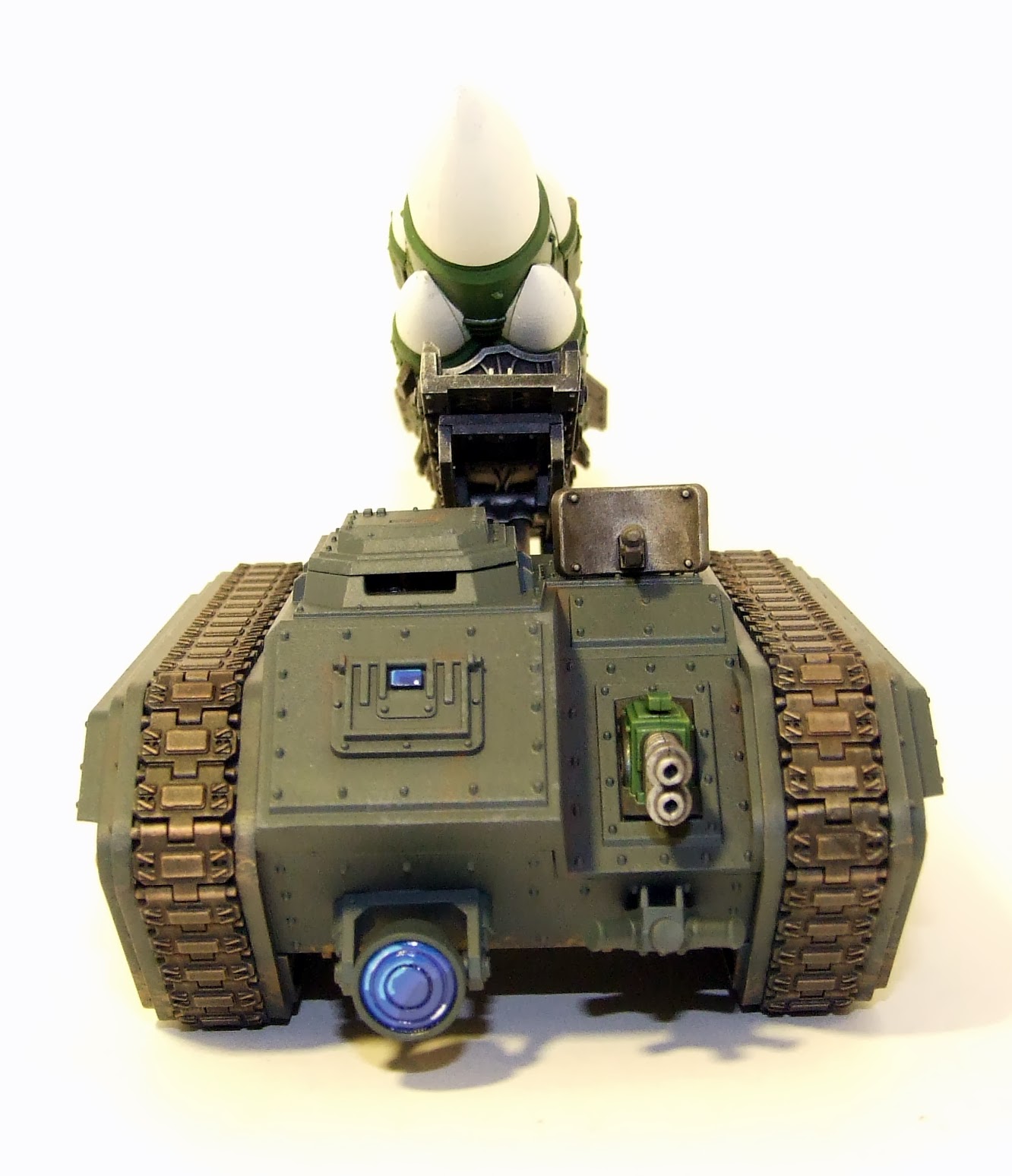 I wouldn't want that missile pointed at me. Though it probably wont get a chance to fire in a game. I tried a slightly different method for painting the searchlight lens. Normally I would do it in yellow, but I chose blue (as it was easier). The lens and view port got a coat of gloss varnish to make them shine a bit more.

A different view. I used ForgeWorld weathering powders again, but varied it a little. I started off by drybrushing and stippling some brown colours to the lower section. Once these had dried, I then added my powders. First up was some Dark Earth, and then a little Light Earth. 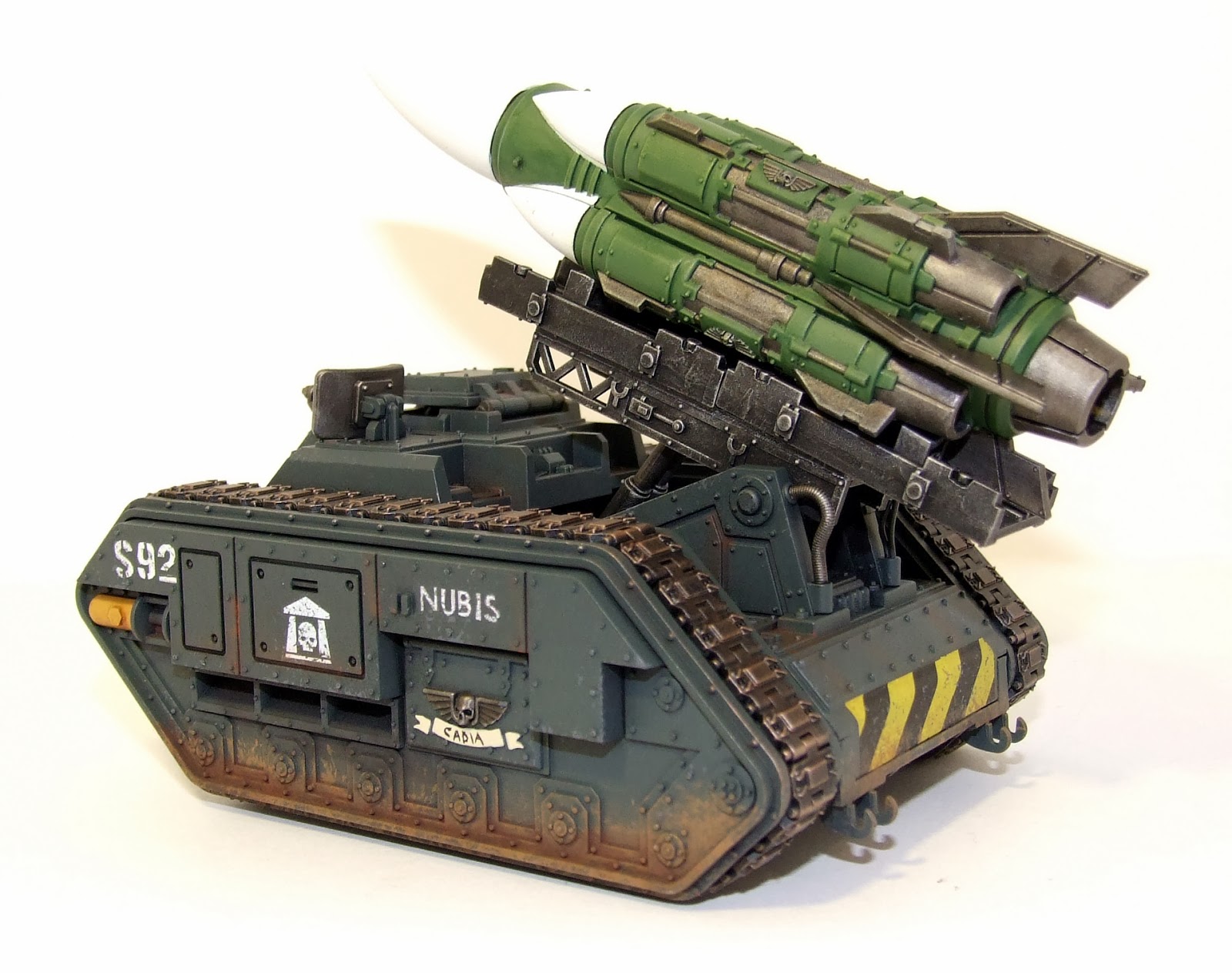 The engine exhausts also got some Black Soot powder added to them. Unlike the previous Manticore, I didn't put any on the back of the tank to represent scorch marks. 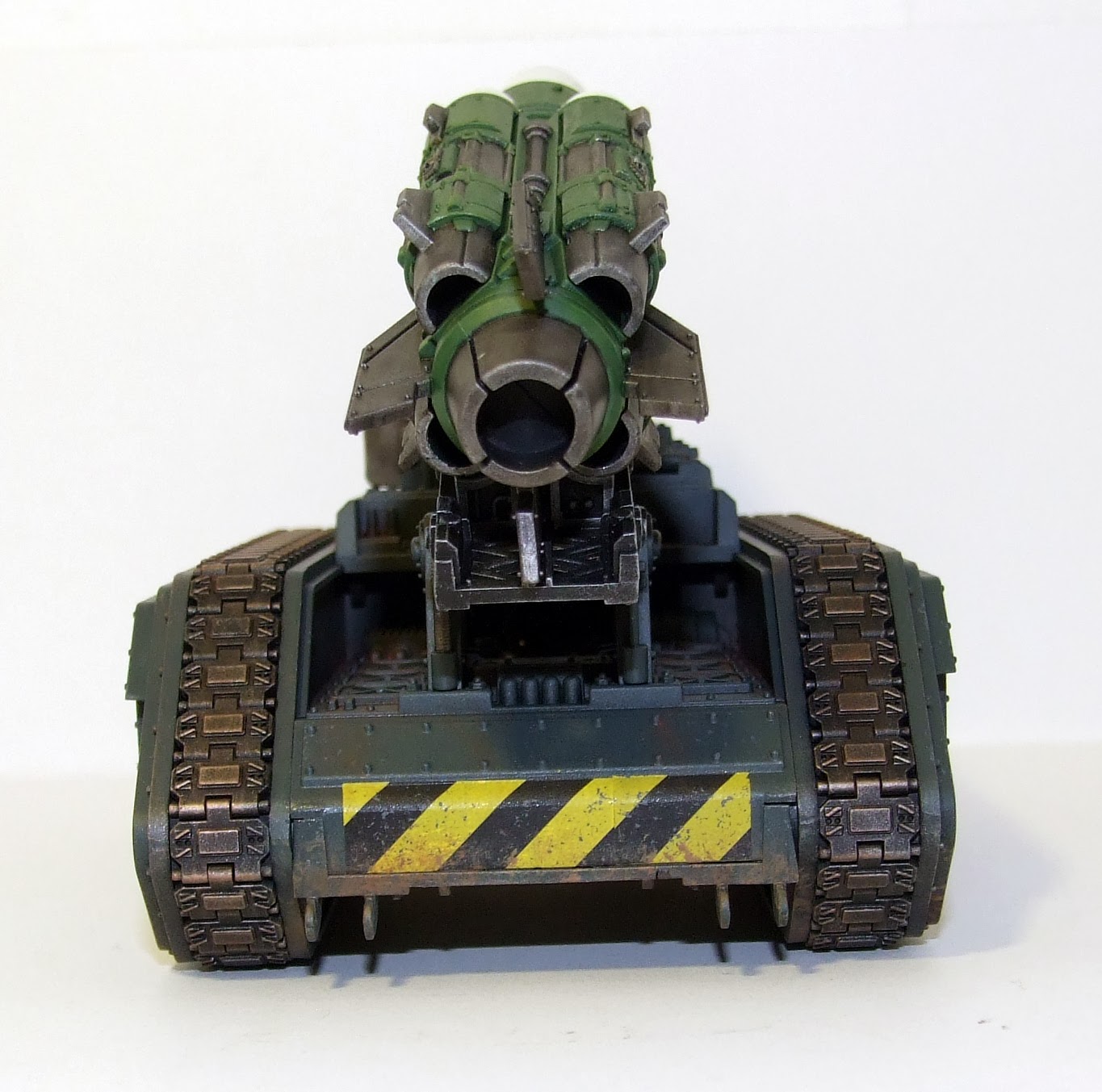 I used two hazard stripe transfers from the Imperial Guard Tank sheet and very carefully lined them up together. In the future I may try painting them (with some practice), however I'm really happy with the look that I got. 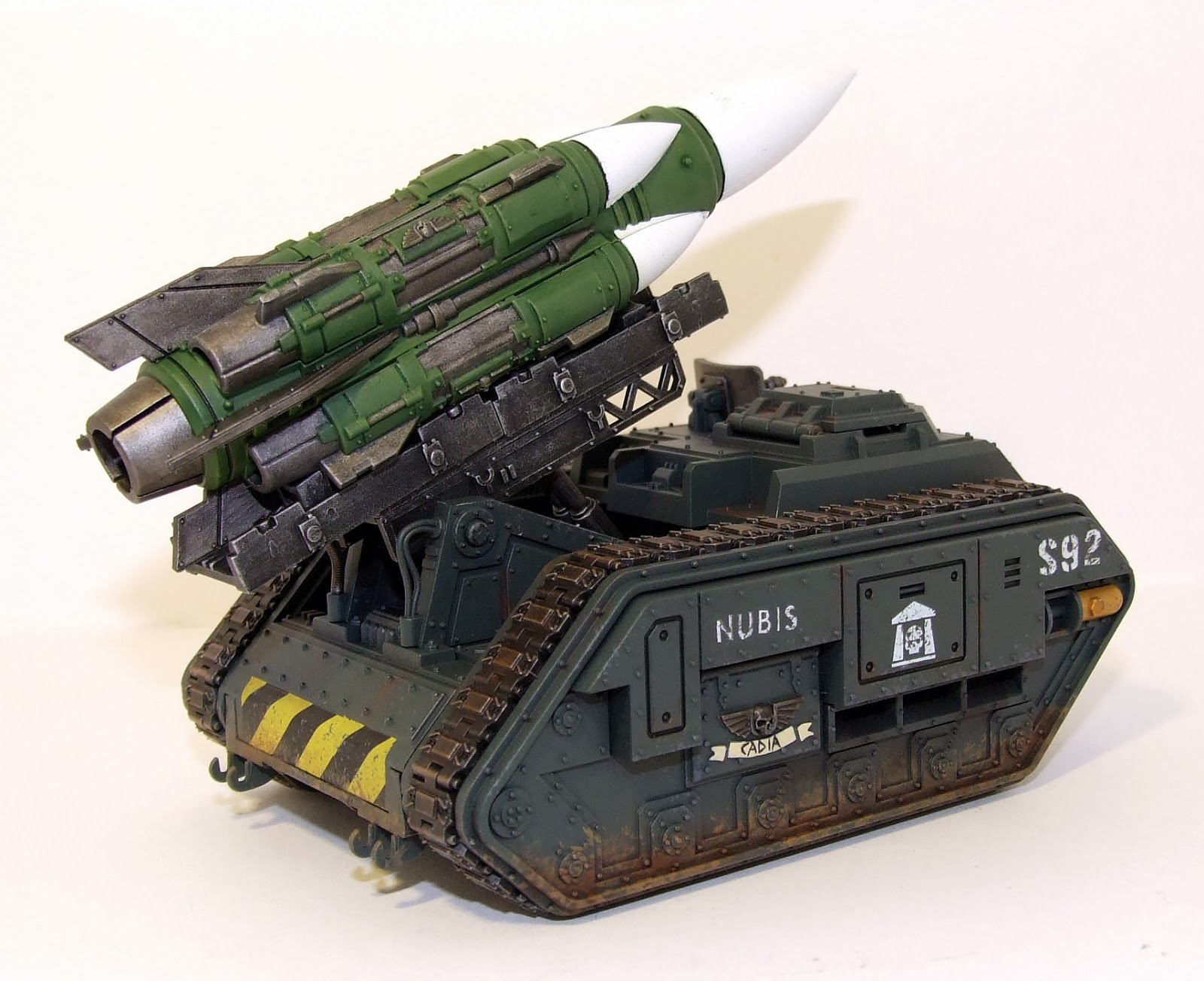 I also used some GW Badab Black wash in the panel recesses on the top sections of the tank. A little bit of Orange Rust weathering powder added to these panels makes the tank look used but not ancient.

A chance to see the missile a bit better. The warheads were painted GW Ceramite White (massive pain to do). I thought about toning the white down with a thin wash, but none of the colours would have looked right. The rest of the missile is GW Knarloc Green, which then got a heavy wash of GW Thraka Green and finished off with drybrushed GW Elysian Green. The metal areas are GW Leadbelcher, a heavy wash of GW Badab Black and then a drybrush of GW Mithril Silver.

Another top view, but this time with the missile removed (presumably off to blow up a small country/continent). Here you can see the missile rack's and the rust weathering. I went a bit heavier with the rust on the top as I assume more water/toxic elements would pool there. 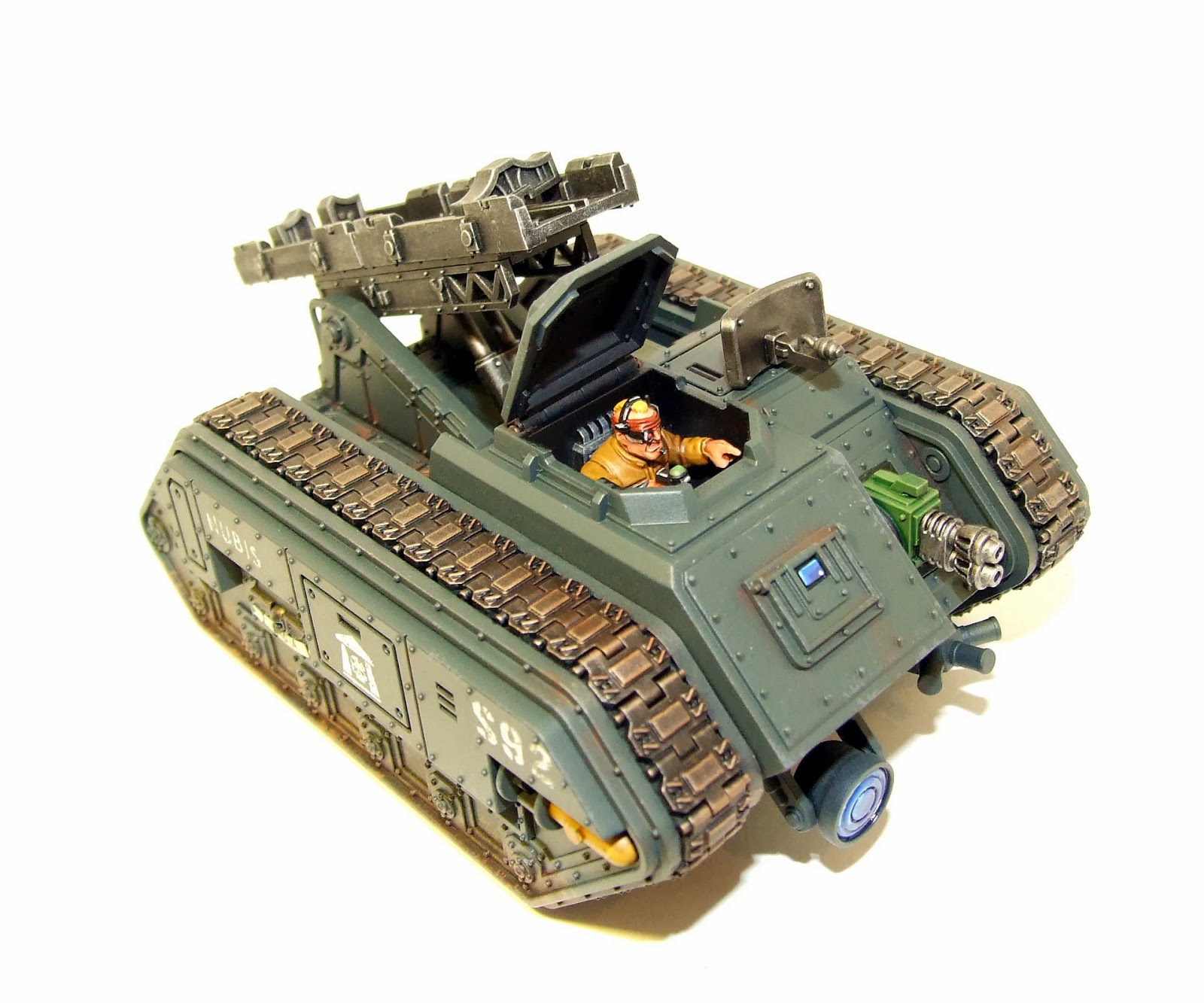 Before I more on to showing you the Manticore variant, there was something I missed out in my magnetising tutorial. 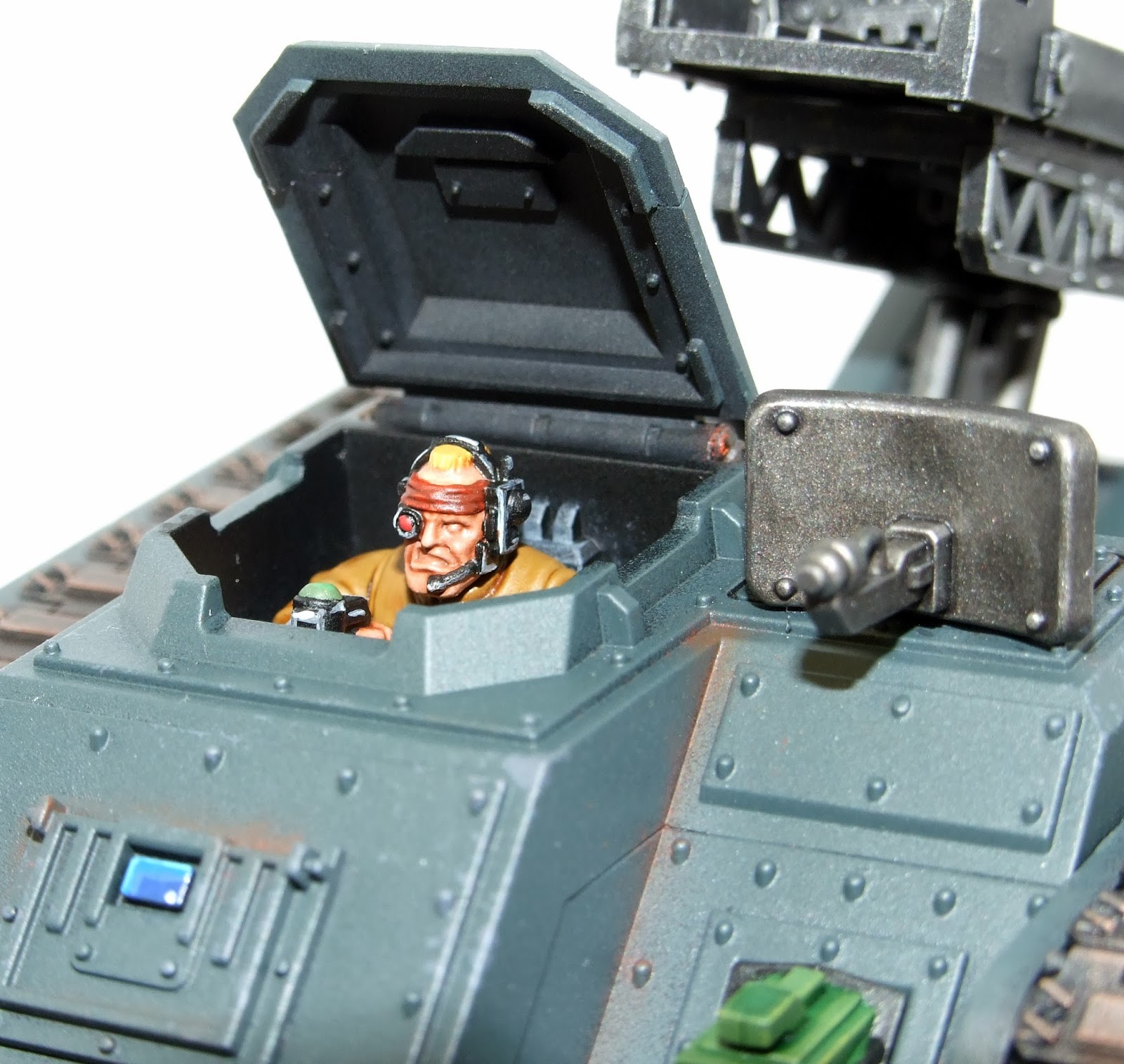 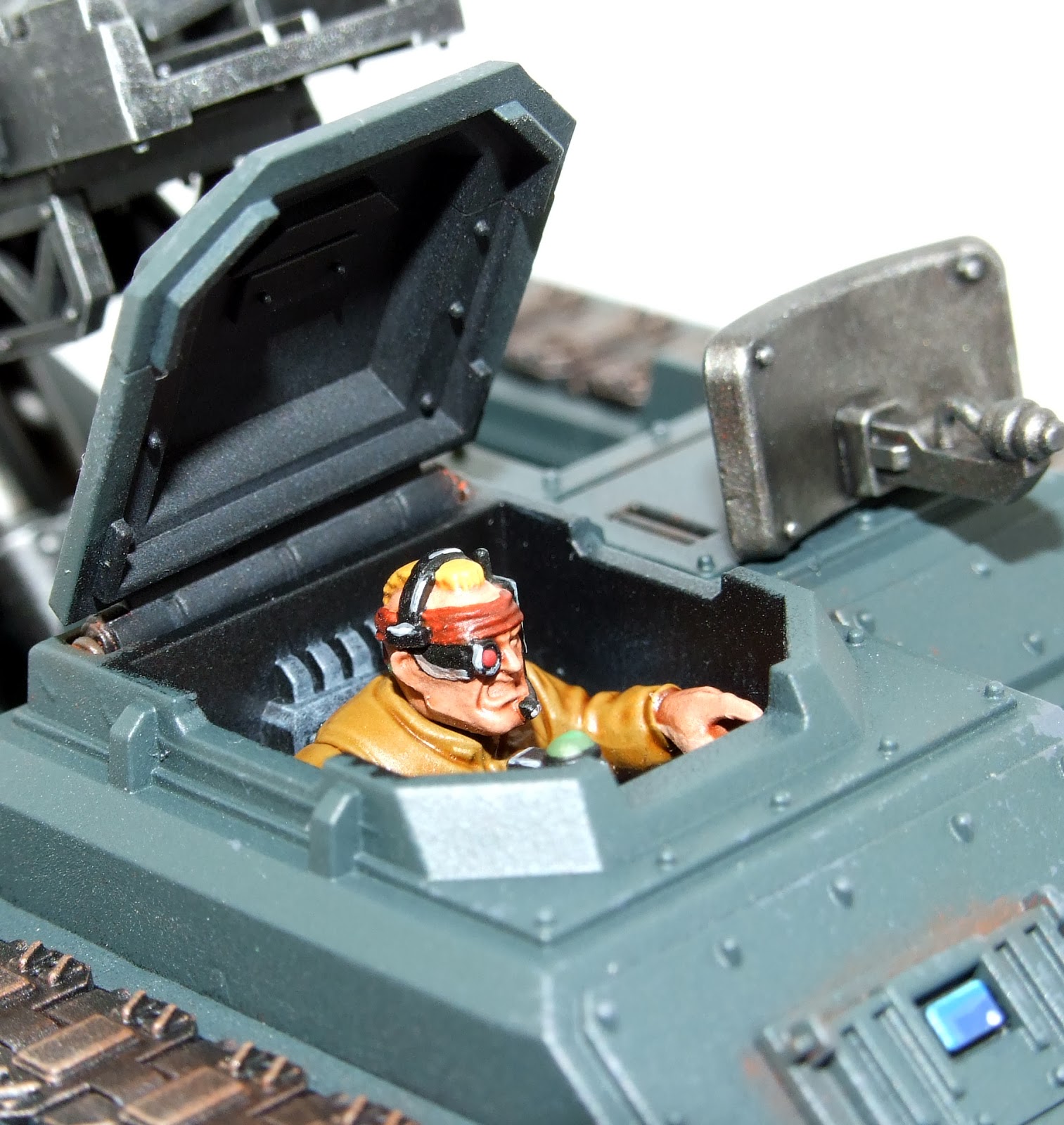 Which is my good side?

As well as all the other magnetic fun, the hatch is also magnetised. This gives me the option of having it shut (when firing) or open, so you see the fire controller. 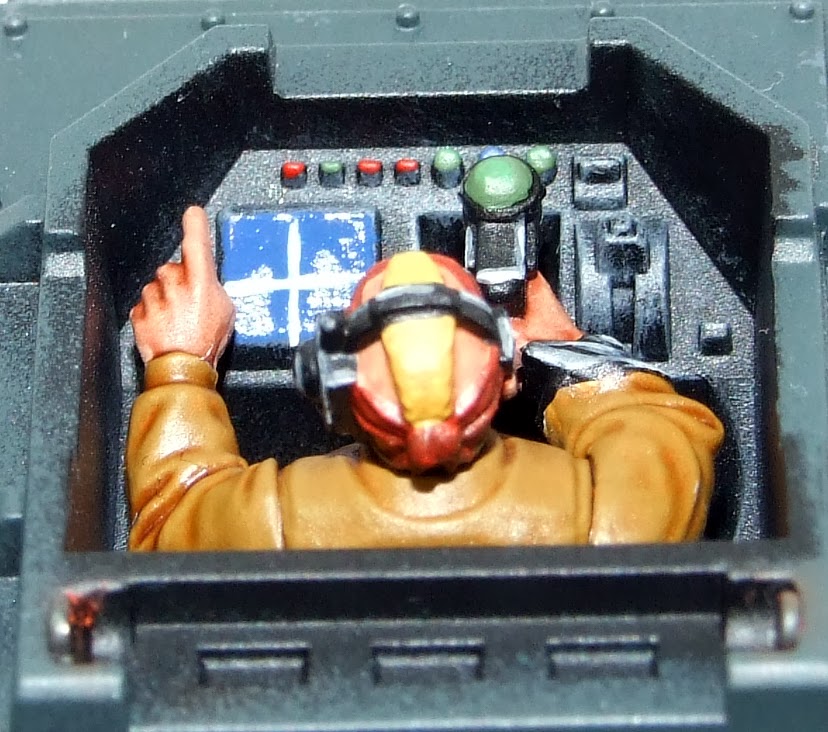 View over the fire controller

I used 4 magnets to achieve this. Two on each end of the hatch and then two in the hatch mount. The hatch needed a little bit of trimming so that it would fit, but it's a nifty little feature now. The interior got a bit of sprucing up as well as the Catachan headed crewman. 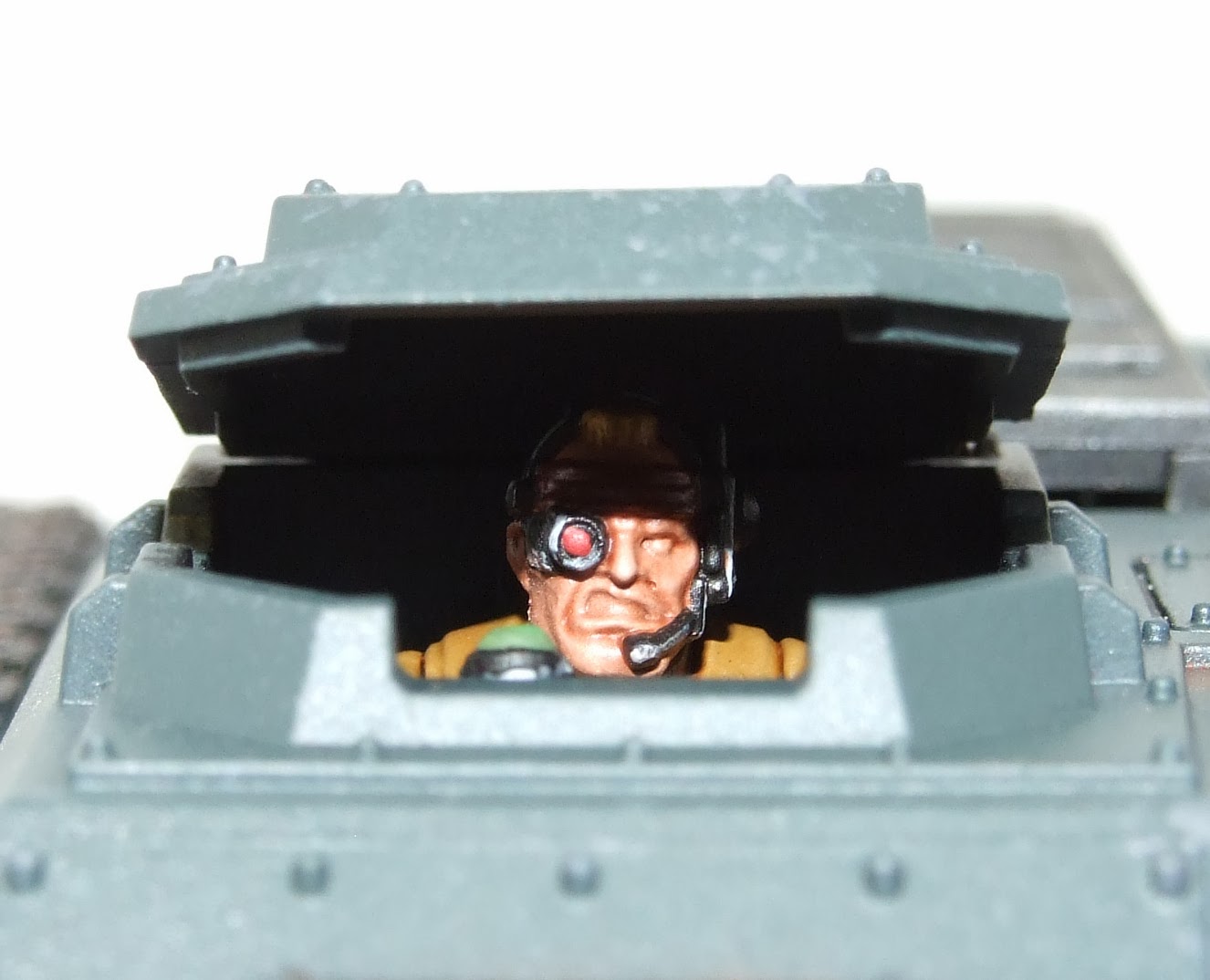 Looking in the hatch

A nice bionic eye looking out. Maybe next time he'll shut the hatch all the way.

Thought I'd chuck in a close up of the view port as well. Now it's time to move on the Manticore. 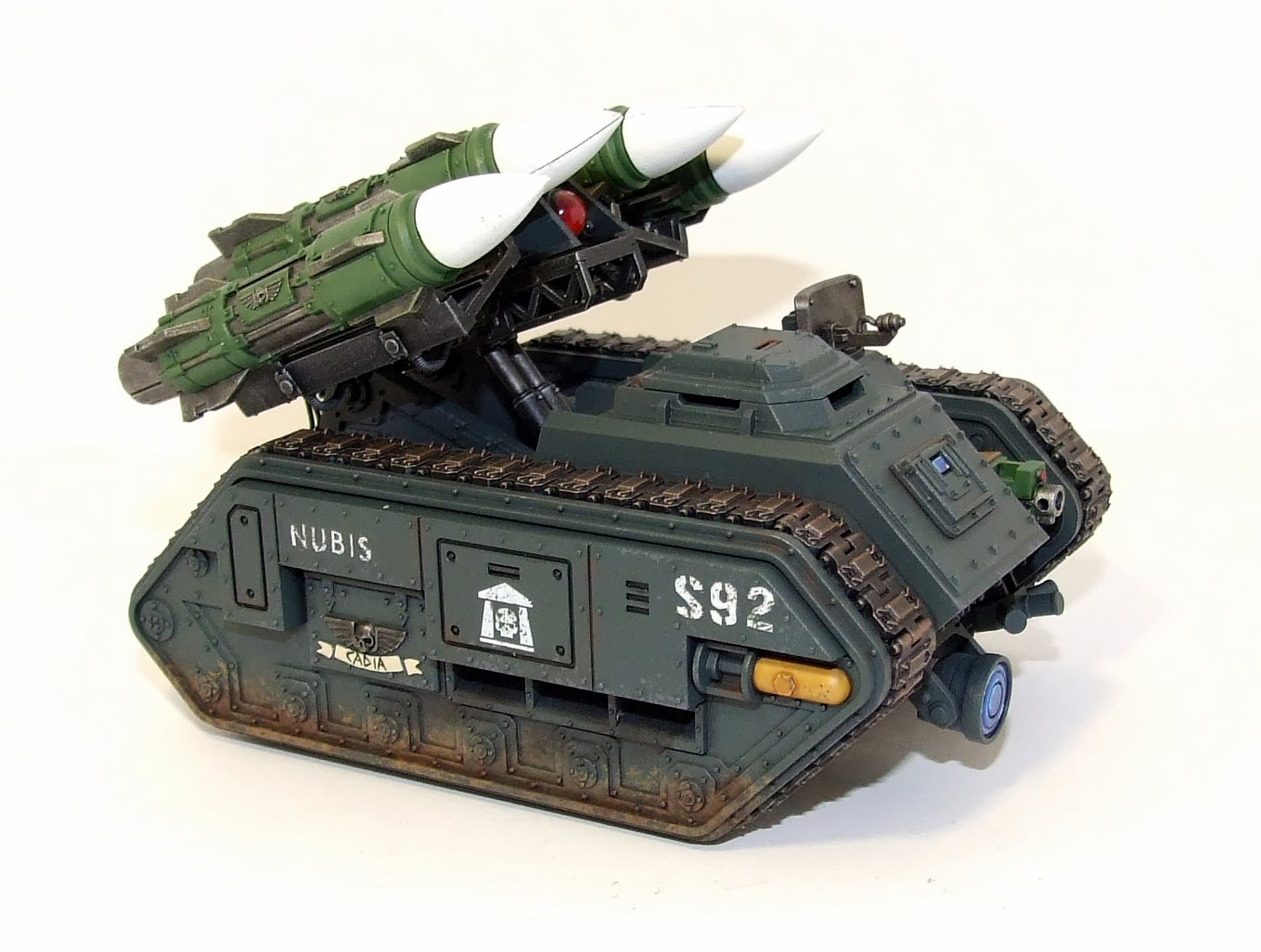 I'll try to keep descriptions to a minimum as the pictures say more than I can. 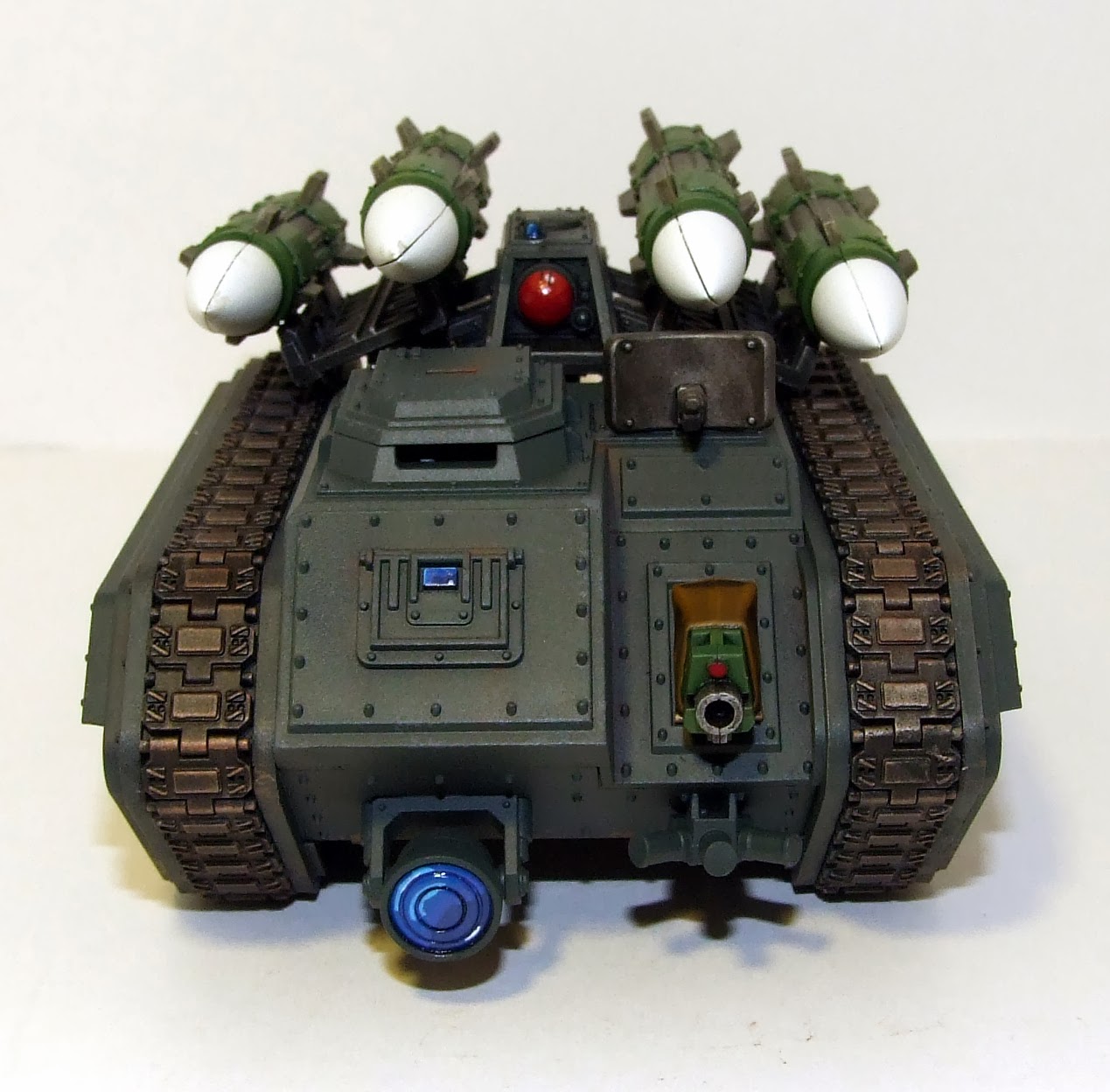 Four missiles of explosive fun coming at you.

I've really enjoyed building this kit and adding the magnets was just the icing on the cake. The redesigned tracks are so much easier than the old style one's and you don't end up with a wonky section somewhere along the line. 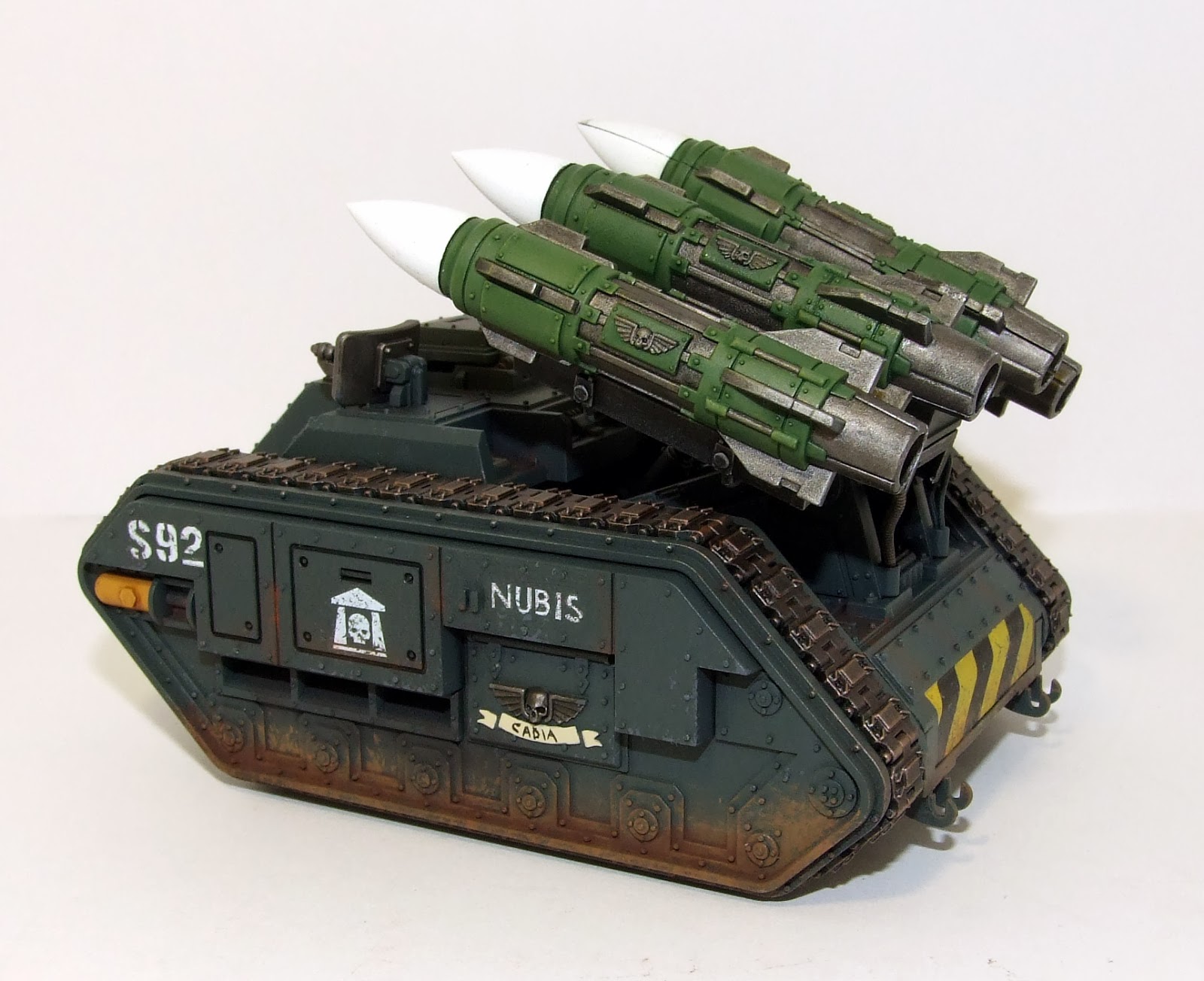 You can see the mud weathering nicely on this photo. The colour gradient works well, but I'm thinking I might have to try something different for the next tank. 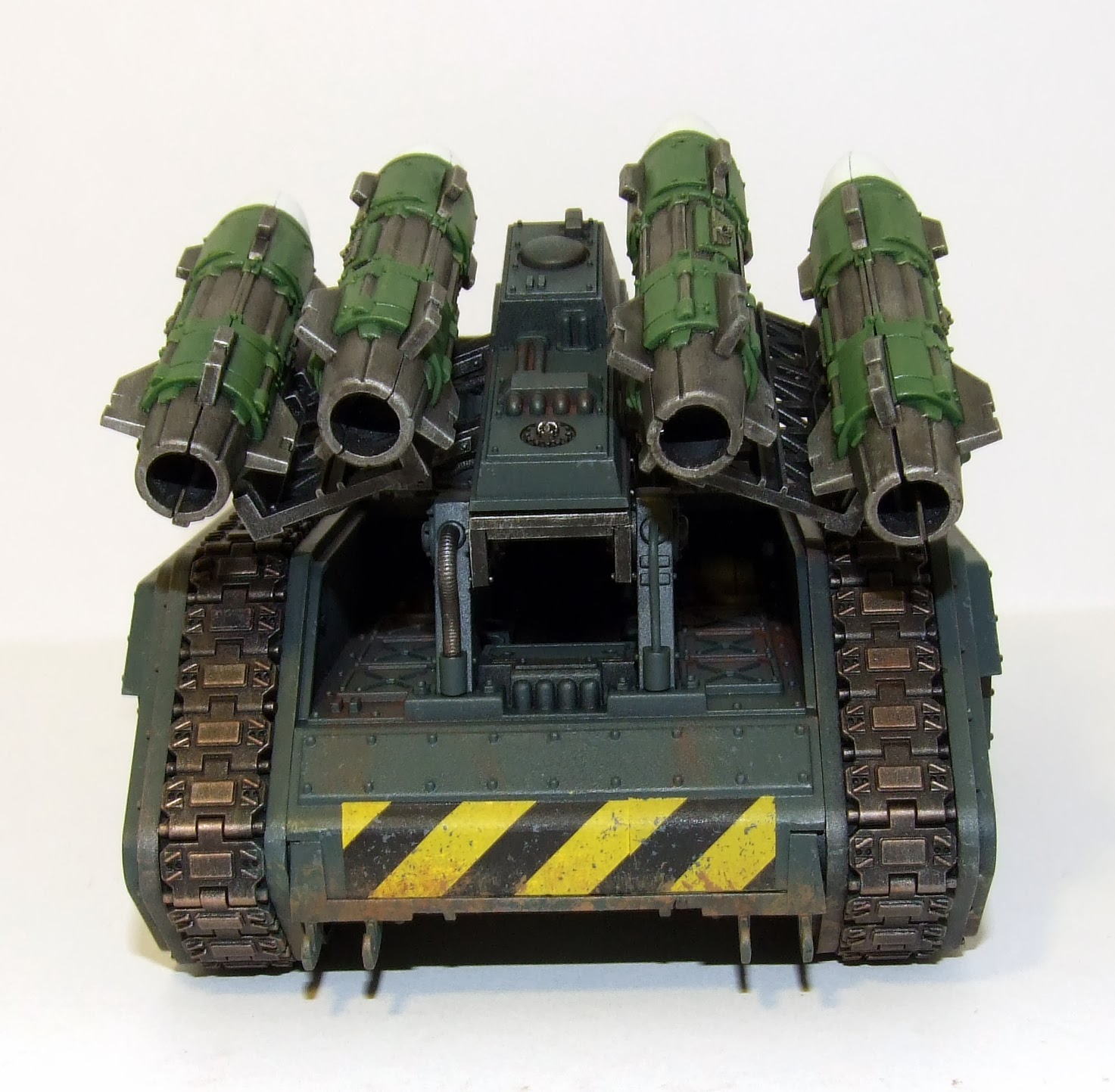 Another good shot of the hazard stripes. Even with the magnets, I did find that the missiles can be a pain to keep in place. A little more experimentation was probably needed. 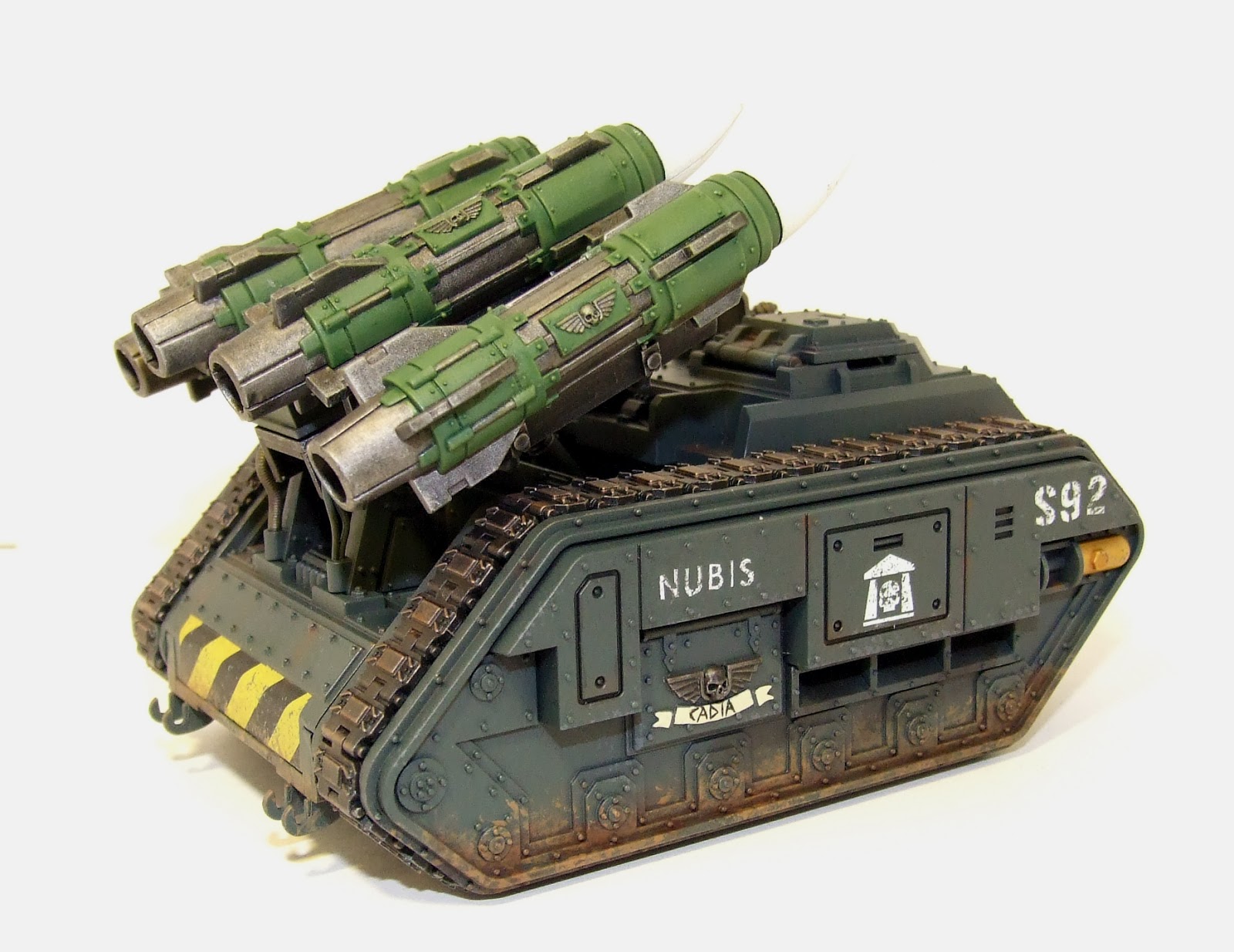 The missile warheads get a bit washed out in the lightbox, so you can't see my brilliant white paint job :-). 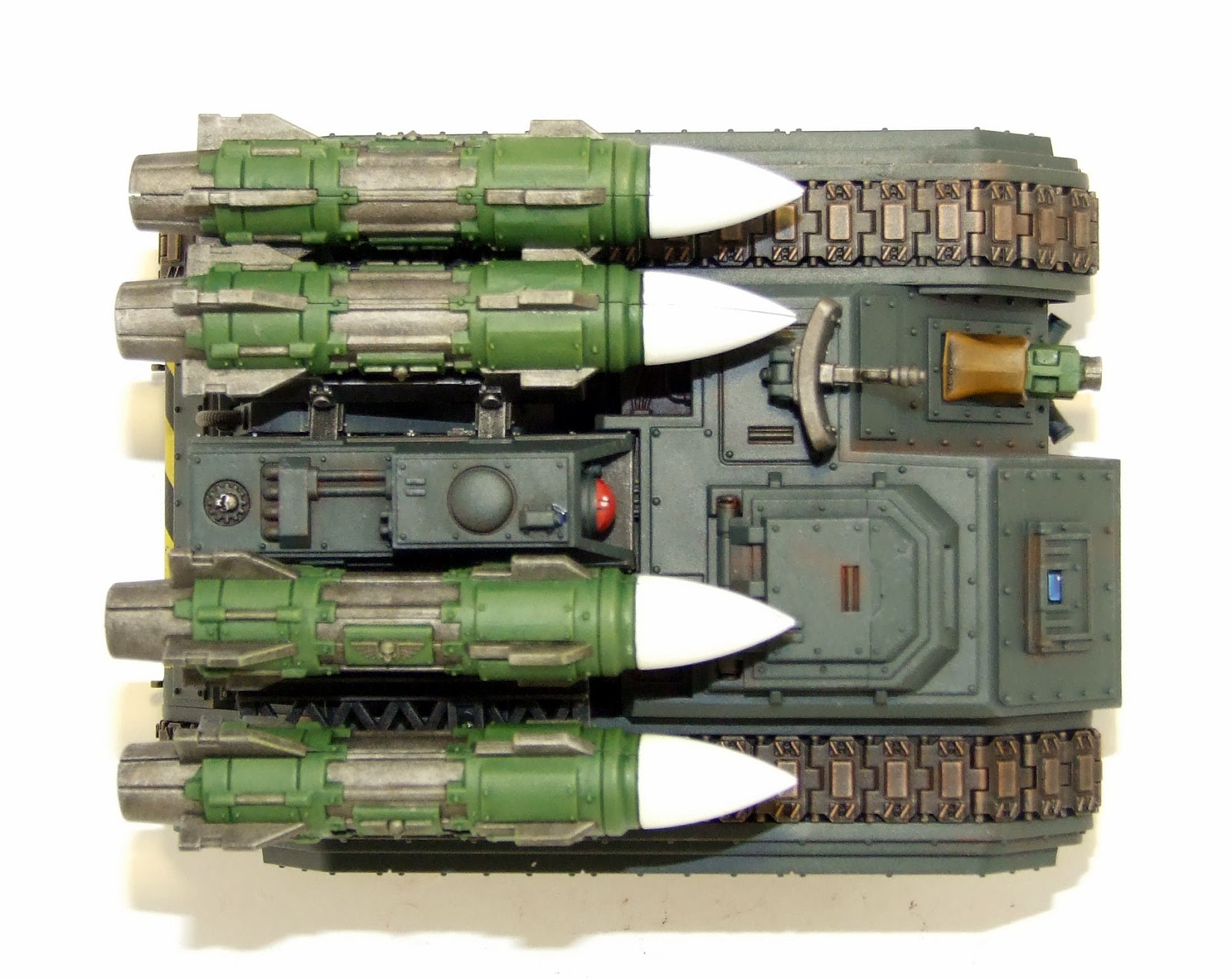 I'm impressed with GW for giving you multiple options in their latest kits. Just having the choice of a different head for a driver can make all the difference. I am, however, still annoyed that you no longer get any track guards! 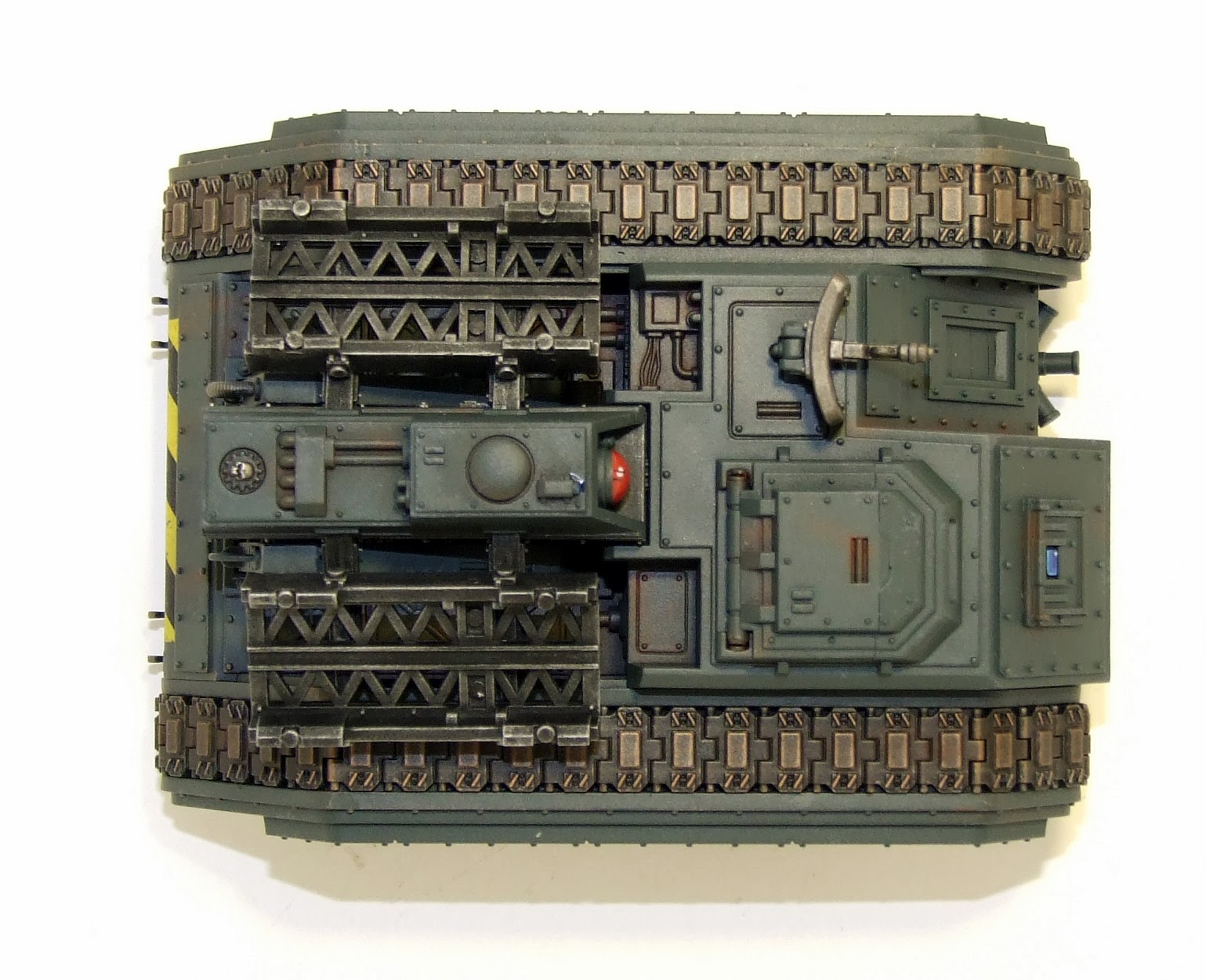 The missile racks now devoid of their payload. And the hull Heavy Bolter has been removed for repairs. 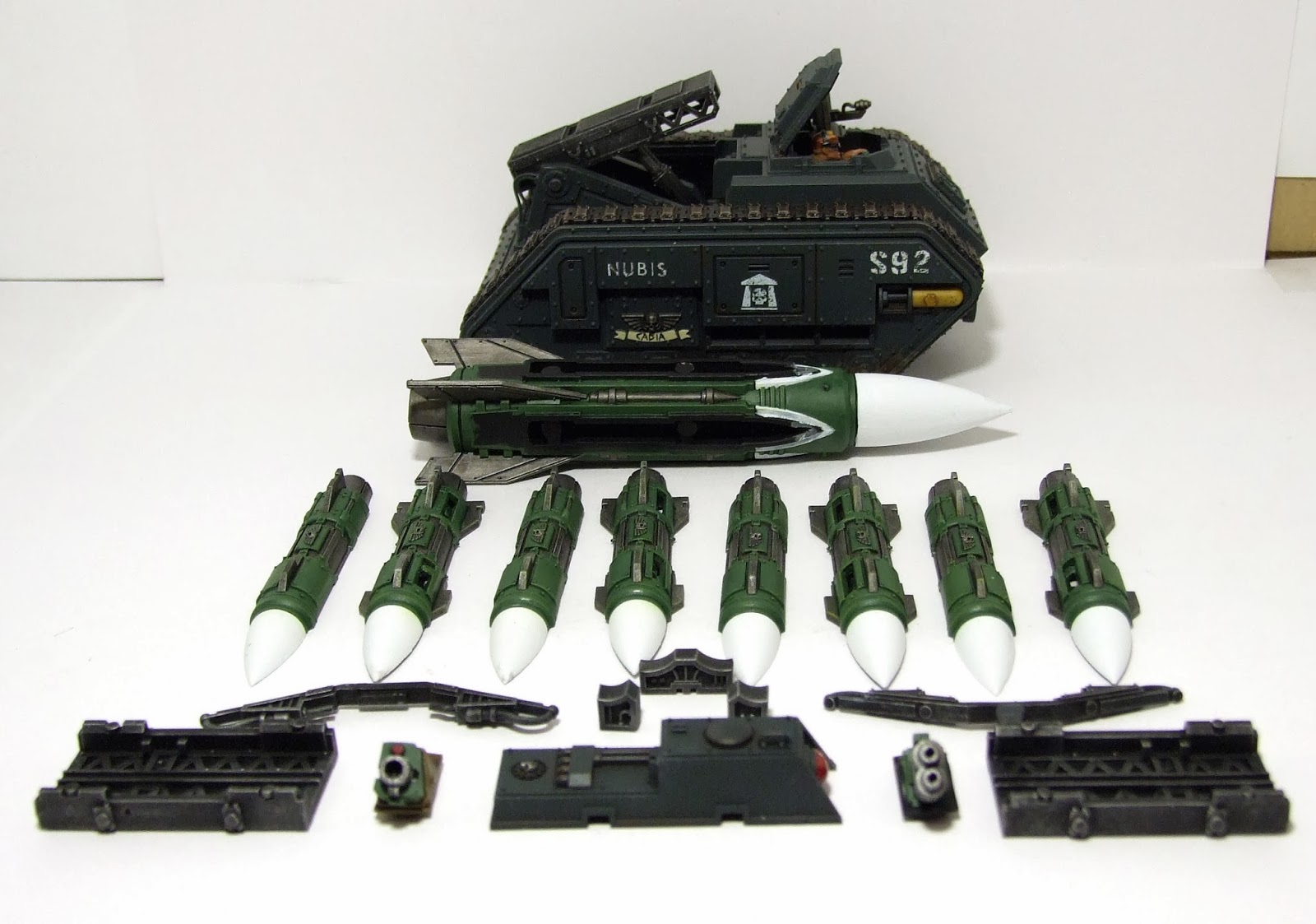 And to finish off this post, here are all of the components laid out.

Thanks for reading! Comments are as always appreciated.
Posted by Cadian 127th at 15:01

Cheers Mordian7th. Hopefully there will be more to come soon