My birthday was a few weeks ago, and my better half got me a ForgeWorld Bombard (among many other things)! I have chosen to do my first unboxing article on this model. THis isn't going to be a video unboxing though. 1 - because I shudder at the thought of my recorded voice being released upon the internet, 2 - I have no tripod for my camera so the video will look like it's been shot Blair Witch style and 3 - I'm just not ready to try it yet. Instead, you get a photo unboxing - just minus the actual box. 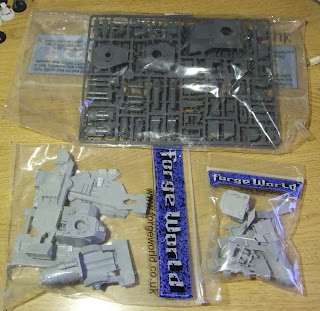 There were 6 separate items within the box: 2 bags of ForgeWorld resin sexiness, 1 bag of GW sprues, 2 A4 sheets of instructions, 1 A4 order receipt and a ForgeWorld brochure (to tempt more money away from me). I was quite surprised to find that the GW sprues were enough to make an entire Leman Russ on its own! So I now have enough bits for an additional turret to make either another standard Russ, an Eradicator, an Exterminator or a Vanquisher. 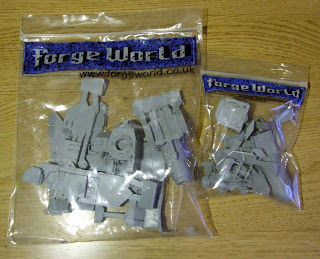 Here are the 2 bags of resin bits. As is the norm with FW, the pieces are left to float around merrily within the bags, with no padding to protect them. One piece was damaged, but FW replaced it quickly and with no hesitation.

The bigger bag contained all of the large pieces. These are the Main Hull, Interior Panels, Exhausts and the all important Bombard Cannon. The casts were very crisp and clean with no major issues. FW handily included extremely large mould tunnels as well. 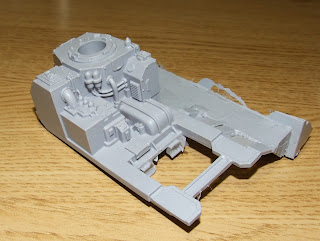 Here is the Main Hull section. I'm not sure how much of this detail will be visible once the model is constructed. I'm hoping once I've dry fitted everything that at least some of the detail will still be visible. 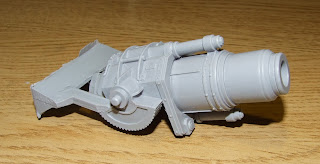 And here is the Bombard Cannon. This is a hefty gun and will be a welcome addition. 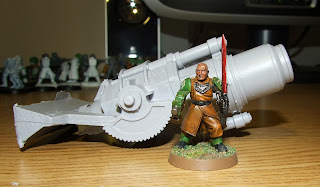 I took a picture of the Cannon with one of the 127th for scale. As you can see its definitely a big gun. 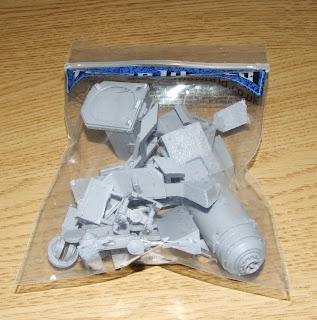 In the other bag were all of the smaller pieces. Although there were some relatively large bits in here as well. 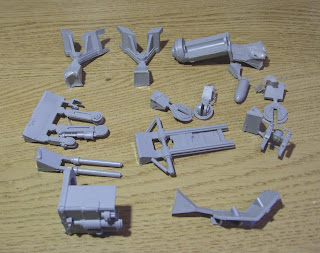 Here are all of the pieces laid out. This looks like it will be a relatively simple kit to put together, with the main intricacy being the shell loader. 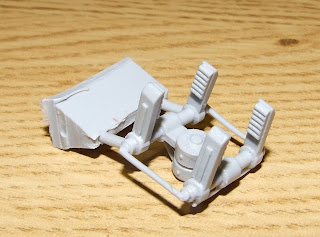 This is the shell loader. I'm very impressed with how crisp the grab teeth are on this cast. 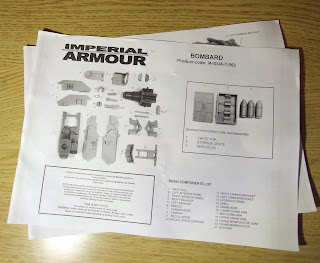 FW include a nice overview sheet so you can check and make sure you've received everything - and also make you want to buy the extra shell box! 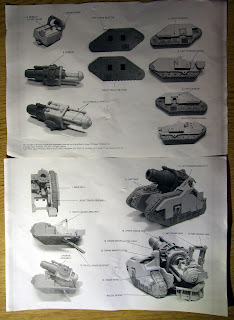 On the reverse of the overview sheet are some of the instructions, with the rest printed on another A4 sheet. For those who may not have tried FW products before, this is pretty much as good as their instructions get.

Overall the kit looks to be a challenge to build but not so much more than most GW kits. The detail and quality of the casts were excellent and FW seem to have improved their process here. As I mentioned before, there was a damaged piece but it was replaced within a week! I'd be happy if FW put a bit more padding in the boxes to try and prevent damage in the future.

I'm looking forward to making this tank, but there are a few other projects ahead of it in the pecking order. Thanks for reading, and I hope this has been informative.

Nice looking kit, have you finished it yet ?

Thats a big gun. The ammo loader looks finicky - how much strength is in the parts?

I like how FW dont bother braking up the plastic kits - they understand a hobbyist desire to build a bitz box better than GW it seems - I've had quite a few kits where you get more than you will need.

@ Zzzzzz - I wish. I might start it once I've got a few more infantry squads finished.

@ Frothing Muppet - it feels like there is a fair bit of strength. There isn't too much flex in it. My bitz box is overflowing somewhat. Too many tank bitz!