Just a quick post today as we're now gearing up for Christmas. Aa well as the Hellhound that was on the Mystery Shelf of Unfinished Models, were two Manticore tanks. The first one had been started on a while ago and can be seen here and here. The second, was an eBay purchase and required a little bit of tidying up work, but nothing major. Today I set to work on them in a vain hope of getting them done by Christmas. 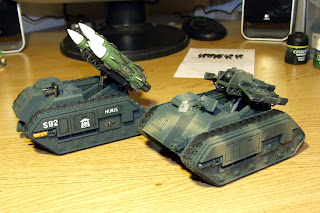 Time for a group shot. On the left is my original Manticore, not looking too far from being finished. Whilst on the right is the eBay purchase. This did have a mid green paint scheme on it, but I airbrushed over it with Vallejo Black Green and then put on some camo stripes of Vallejo Light Grey Green. 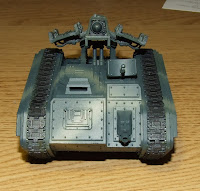 Here are some more photos. The camo does carry on under the front of the tank as well. My original plan was to paint the missile racks in black and then drybrush them with silver, but now I'm not too sure. Do you think they would look better with the camo scheme left on? After all, they won't be that visible once the missiles are in place. 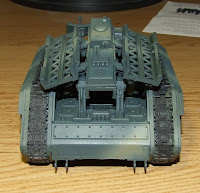 And here is the other side and the rear of the tank. The previous owner glued the missile system in place so unfortunately it can't be raised or lowered, though I may give it some gentle persuasion to get it moving again. 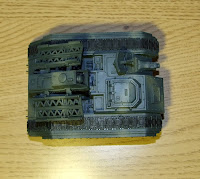 And here is a top down shot and also the dozer blade. I feel that with each session of using the airbrush, I get a little bit better. I felt more confident in laying down these lines than I have done before. 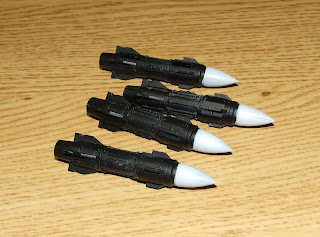 Finally, here are the missiles. They will get painted up to match the other Manticore, but at least you get a sense of where I'm trying to go with them. The tips were airbrushed with Vallejo Grey Primer so that they are a bit easier to paint white when the time comes.

Thanks for reading and Merry Christmas (just in case I can't manage to post anything before then)!!!
Posted by Cadian 127th at 09:00

I think that you could leave the missile racks as they are: some chipping (perhaps sponge chipping) and weathering generally and then use the airbrush to build up several layers of scorching towards the back.

IMHO, you can do this and it would look good.

@ Zzzzzz - I was thinking that the racks would look better as is. I'm probably not going to glue the missiles in place.

I'll have a go at the scorching. May need to practice this on something else before trying it on the tank itself.

Thanks for the idea Zzzzzz