The 127th's Commanding Officer paced slowly around his command centre, fine tobacco cigar in his left hand and a dataslate in his right. To his staff sat at the conference table, it was obvious which item he was more interested in, as the cigar embers dropped to the floor in a slow shower of ash.

The dataslate contained a request from Devos IV. A request to provide a small squad to help co ordinate and liaise with the main command whilst hostilities continued in that region. A similar liaison squad from Devos IV was already being prepared for despatch to the 127th's location.

"Lt Manuelson and his command squad perhaps, sir. He's fresh and wants to prove himself" replied an aide to the rear of the table.

"How about Crant? He's getting itchy being in charge of supplies" came another suggestion, which was followed by some nodding heads and a few raised eyebrows.

"Crant or Manuelson? Give me details and compliments if you would Fers."

Another aide quickly scrolled through the dataslate in front of him.

"Crant, rank of Lieutenant. Has been same rank for 6 years. No notable actions, and no citations. Command squad currently at half strength and in command of supplies section.
"Manuelson, also Lieutenant. Commissioned within past 3 months. Led defence of Outpost Alpha 9-2 and held for 3 weeks after unforeseen raid by Cultists. Minor citation for insubordination, deemed as misunderstanding. Command squad at full strength, including 2 armoured vehicles. Manuelson's squad also carries the company standard, which I assume will stay with the regiment" The aide finished and smiled. The CO did not.

"Easy decision there then. Manuelson it is. Pass the orders and get them shipped on the next vessel heading to that system - with the standard. I want those on Devos know who's watching them"

Men and Materiels manifest for transfer to Devos IV: 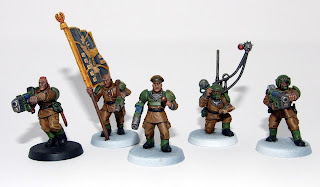 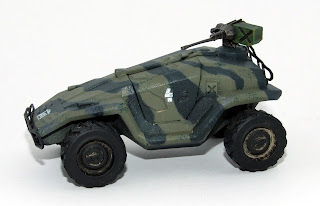 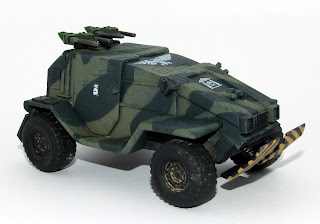 I like it, some excellent fluff there and love the model for the Lt. Watch out Devos IV, here they come!

Great work, I really dig how those turned out!

@ Colonel Scipio - thanks for the comment. It was nice to get a chance at writing some fluff again.

@ Mordian7th - cheers for the comment. I'm going to post some more pics once the team has safely arrived at Devos IV

Good to here they made the transition safely.