.....in my house. I've seen a lot of people posting up pictures of their workspaces/offices/hobby dens/escape rooms and figured as I'm in the process of reorganising mine (as a distraction to a course that I'm meant to finish by the end of next week). 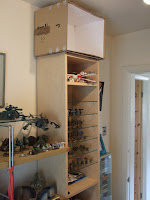 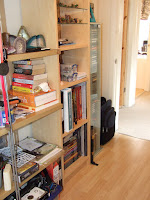 As soon as I enter my study, I've got a DVD rack with all my PC games and software in. I say in, the discs themselves are in a neat little tidy on my desk and just the cases are in the rack. Next that is a BILLY 40cm wide bookcase from Ikea. As you can see its mostly glass shelves in the top half and wood in the bottom half. There aren't any peg holes close to the mid point, so I drilled out my own for the glass shelf at the bottom, and it's the least wobbly of them all.

The bottom half is filled with odd bits, such as batteries, and then some my codices, rulebooks, painting guides, White Dwarves and some of the wife's stuff. On the top is my quickly made light box, but the top half is where all the fun is happening.... 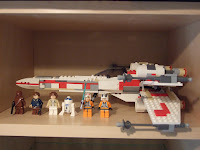 The very top shelf (which will become a glass one when I get drum up the courage to brave Ikea again) has a LEGO Star Wars X Wing Fighter 6212, complete with Luke, Chewy, Han, Wedge, Leia and R2. I've got a load of Lego dotted around the house, and stored in the loft. I'm hoping that at some point I'll have enough space to rebuild my Star Destroyer (6211). Anyway, on with the rest of the shelves. 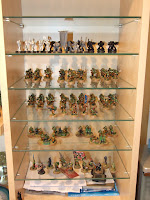 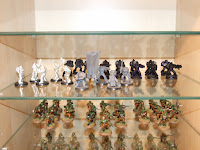 I've ignored the empty shelf as I'm still unsure what's going to go on it. I may move the space Marines up one. So my small force of Marines occupy the next shelf. Next shelf down... 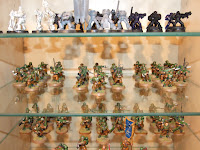 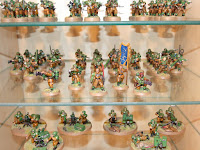 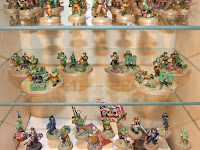 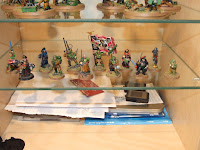 On the next shelf are the heavy weapons teams, consisting of three mortars and three heavy bolters. The lascannon and autocannon squads are in my stash of almost finished models (which I think is larger than my finished stash). Below them is the company command squad and attached advisers, The final shelf is currently being used as a dumping ground for things I've cleared from my desk, but will probably be used for the sentinels. And with that onto the next shelf unit. 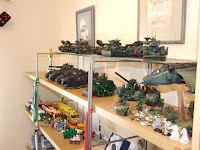 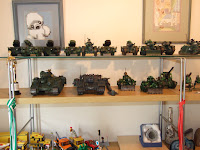 This unit is also from Ikea, but I don't think they make it any more. The glass shelf on the top is not part of the unit, it's just a random glass shelf that again came from Ikea and was big enough to bridge the gap between the two support pieces. The glass shelf has my Emperor's Fist tank company on parade. I've still got 5 more tanks to finish but at least they all have their camo coats done.

The wooden shelf has the rest of my armoured support, including a Baneblade, my magnetised Stormlord, another Leman Russ, a Demolisher, a Basilisk, 3 sentinels and my Valkyrie. There is also a little artillery piece butchered from a Basilisk and some more part finished models. 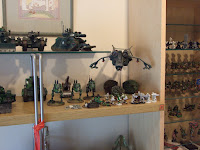 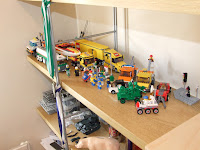 Here you can see the part finished models a bit better, with the Valkyrie and sentinels looming in the background. The Valkyrie's base is in need of some dire repairs, as the woodland has fallen off. The shelf below this has more of my Lego collection, mainly City items, but also a Toy Story jeep and army men. The right hand shelf has some agate rocks and other glass display items. I'm not sure why I didn't take a photo of them, obviously my brain switched off at that point. 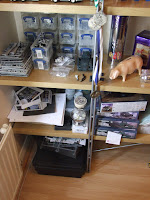 And occupying the bottom left hand side of the shelves are all of my bits for my Guard and Space Marines. There are also some Empire pieces mixed in from where I started making a few models. I think this section is definitely organized chaos, I can find anything I'm after pretty quickly without too much hassle. 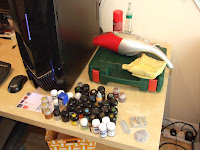 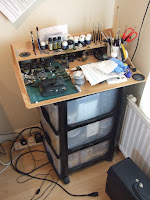 And finally on this long and hard road of Ikea shelf units, we actually get to the painting part of my desk. The desk itself is (surprise surprise) from Ikea. My paint station normally sits where the electric drill and handheld vacuum are but has been moved onto my little roller drawers. The top drawer has more sprues and useful things in, and the bottom two are chock full of my Empire army, which I keep meaning to start, but not until I've finished most of what I've begun first.

Anyway thanks for reading, and sifting through the mess that is my study.
Posted by Cadian 127th at 21:19

Thanks a lot for sharing! Ikea is the way forward for displaying models - unfortunately I'm in accomodation provided by my work at the moment, so I move too often for it being worth putting up shelves etc. However, when I do it will be something along the lines of your stuff. Great pics - and of course the models look great

Nice. Can you actually case or box all of them for a game somewhere else ? I'm a little jealous that yours are in the house, rather than the garage, but I suppose that means I don't have to carry them in and out to the gaming table.

@ Colonel Scipio - yeah Ikea does seem to be the way forward. I think it's just the fact that they do different options at a relatively affordable price.

@ Zzzzzz - I can box them and transport them. I've got a lot of the original boxes for the tanks, which I pad out with bubble wrap. And then a GW hard case for the troops. I did consider getting a KR or Battlefoam case, but I don't play often enough to justify the expense. The study is kind of my little escape room, where my wife dares not venture.

Cheers for the comments.

I love seeing people armies out on display so thanks for the post! You have a very nice collection. I really like the trooper that is lying down by the Heavy bolter taking an aimed shot.