So 6th edition brought back the whole idea of allies. I expect that at some point I may actually try to start gaming again. But for the moment I have decided to build up a small force of Space Marines to be allied with my Guard.

Over the past few weeks, I've been looking through eBay for a few extra bits and pieces to flesh out the Space Marines that I've owned for a few years - sitting on a shelf made but not painted with most of my other projects.

In the picture above you can see the force as it stands, or in some cases as it lies in pieces. the army centrepiece will be the 25th Anniversary model, who is magnetised so can be on the scenic base or on a normal round base, and the flag can then maybe be used as an objective.

The rest of the force consists of: 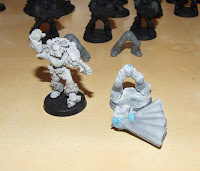 I've had to strip some old paint jobs off some of the models. I painted up the commander in the Sons of Guilliman colours, but then decided that split schemes wasn't for me. And the devastators had been basecoated white, while the legs had received a coat of blue, so they got stripped back as well, but for £12 off eBay, I can't complain. 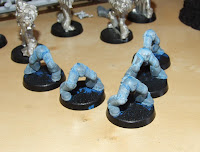 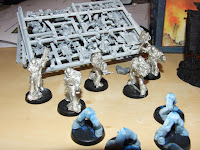 The Command Squad is in various stages of construction, and 1 marine has been assigned to the Combat Squad, which consists of some starter set marines that my local GW gave me to practice using liquid green stuff on. The dreadnought was a brand new and sealed item off eBay, so that was good. I can't even remember buying the Veterans, but they are metal so it's a few years go that I got them. The tactical squad is loaded out with a missile launcher and plasma gun, but the plasma gun is not glued down so I may try some magnetic trickery there.

All in all not a bad little force to start with, bearing in mind that I hardly ever play. By now I imagine some of you are wondering why the Crimson Fist reference in the title (or not).  Well the reason for the reference, other than the 25th anniversary model, is that I will be painting these marines up as Crimson Fists (big surprise for those that hadn't guessed that). When I had some marines before, I painted them as Crimson Fists, just to be different. And now I'm going to do the same with these guys, plus the back story is pretty cool.

Thanks for reading through this. Comments etc are always appreciated.

P.S. this blog is almost at 100 followers!!!! So please recommend to your friends/followers so it can break the century barrier. Thanks!
Posted by Cadian 127th at 10:48

Looks a decent start to a well rounded force.

For all the complaining about the prevalence of marines across the web, they are probably the best army for simply picking up some units, throwing bits around, and coming up with a quick and dirty force in next to no time.

And it helps that Crimson Fists are cool. Steve Parkers Rynn's World is well worth a read if you haven't read it before.

I agree, that you have a nice balanced force coming together. Any plans for transportation? Drop Pods could fit in nicely with how Space Marines would reinforce the Imperial Guard.

It's always good to get something off the shelf. Looking good so far.

@ Rogue Pom - Crimson Fists are cool :-). I've not read Rynn's World, will have to pick up a copy

@ Spyrle - No plans for transportation yet. Was thinking drop pod or land raider

@ Zzzzzz - the problem is there is still loads on the shelf :-)

Thanks for the comments guys