Just a short update to give you an idea of what I've been up to on the Hellhound and Manticore. 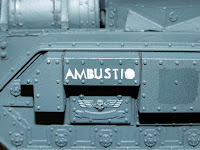 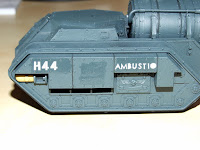 I've been trying my hand with custom transfers, which are pretty simple to do, but require an ability to be very precise with a hobby knife. Either way, they give a nice way of applying names etc without doing freehand work. 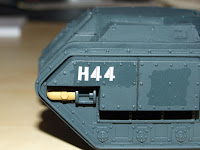 The hellhound has been dubbed "Ambustio", which according to google translate is Latin for "Fire". It has also been given the designation H44,  H for hellhound :). I will be adding a Cadian gate transfer to the centre panel's as well, which is why there is a patch of varnish. 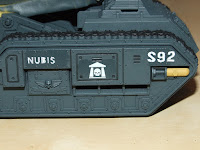 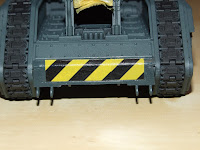 The manticore has also received some transferry love. This tank has been named "Nubis", Latin for "Cloud". And has been designated S92. I've been trying to keep the tank names along a similar path, so the artillery relates to each other a bit, my Basilisk is "Tonitrus" - "Thunder". The hazard stripes were made by combining two of the transfers from the Guard transfer sheet.

I told you it was a short update. This isn't all I've been up to, there is more to come, but I want to finish those bits off first. Thanks for reading, and as always comments and suggestions are appreciated.
Posted by Cadian 127th at 11:18

Good stuff, I've not tried custom transfers but those look really nice. Keep it up!

They were pretty easy to make, but not so easy to cut out. Really I should have tried to match the tank colour with the ink so i didnt have black lines round the edge