A double whammy for you all today. I am currently working on two models. The first is my ForgeWorld Artemia pattern Hellhound. And the second is the all plastic GW Manticore/Deathstrike.

So to start off with, here is the Artemia pattern Hellhound. I've had this kit for a few years and like others has been sat unfinished. It was basecoated in my old scheme of Dark Angels Green, but I sprayed it with Fairy Power Spray, and left it to soak before attacking it with a toothbrush to remove the old paint. It cleaned up pretty well, with only the light basecoat of Chaos Black remaining, which was good enough for me.

I gave the tank another light coat of Chaos Black spray just to make it even and all the resin bits needed it as they had cleaned up beautifully (probably as I hadn't washed them down properly in the first place - oops!). One the basecoat had dried, I applied Vallejo Model Air Black Green straight from the pot using the Games Workshop spray gun, the results of which can be seen below:

For a cheap (ish) alternative to an airbrush, it did a pretty good job. The coat is nice and even, with no pooling or paint runs. How much of that is to do with the paint itself I can't say. The Model Air range doesn't require thinning. I sprayed the whole model, except the tracks as I'd left them off for ease of painting. 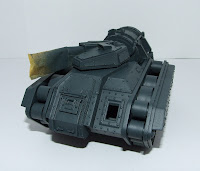 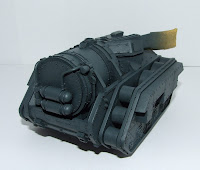 I did mask up the barrel of the Inferno cannon as it will be easier to paint over a black basecoat rather than the green. I have got a heavy flamer to on the hull as well. If I'd made this model recently, I would have tried to magnetise the hull weapons, oh well. That's how far I am with the Hellhound, now onto the Manticore! 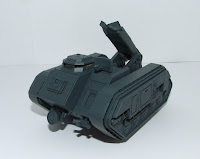 And here is the Manticore/Deathstrike. Doesn't look particularly impressive without a missile, or four, attached to it. The paint scheme is the same as the Hellhound, Vallejo Model Air Black Green over a Chaos Black spray undercoat. I have done a hell of a lot more to this model, which will all become apparent in the next post. Stay tuned and thanks for reading!

Wouldn't like to be on the receiving end of those - some fine support tanks there. That Hellhound is a nice kit, can't wait to see it finished. Also good idea with the masking tape - I've never tried it before, I usually 'mud up' my tracks so they're brown rather than metal anyway but you've put a lot of thought into how you'll end up painting it. I don't often do that. Good quality photos too by the way.

What, something sitting around unfinished for years? I have no idea what that's like....;)

Thanks for the comments.
@ Colonel Scipio - Thanks. I do like the FW kit, the offset Inferno cannon and huge fuel tank work quite well. I normally repaint my tracks after the camo scheme is put on, but figured it might be quicker to mask them up, so I only have to redo the edges. they will get my usual drybrushed mud effect though.

I find getting good photos is sometimes more by luck than judgement. I've got a lightbox, cardboard box with white card stuck on the inside, and then a semi pro camera (FujiFilm S6500fd) which has a pretty good macro setting. I have got a full pro digital SLR (Canon 10D), but I haven't got a macro lens.

@ Raghnall - Lol, yeah I think my shelf of "completed" models is mainly a collection of unfinished several year old models.

Cheers for commenting, I'm aiming to do more work on them today so hopefully will post again.

Great work! For me its quite normal - sometimes you will discover some "older projects" under your workbench =)