Ride of the Valkyrie, Part 3

So its time to take a look at how this project is progressing.

When I started this project I thought about magnetising everything using Col. Corbane's excellent guide here, but I kind off forgot about it and by then it was too late. So instead I've decided that I'll just magnetise some parts, and by some I mean the wing mounted weapons and the nose weapons. However, I'm not quite at that part of the build, mainly as I can't find my magnets!

In the mean time here are some progress shots: 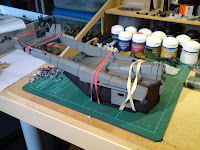 Firstly, I glued the other tail section onto the main body. I also glued the cross piece that runs between the two at the back. Both side doors open nice and smoothly, one side a bit to easily though. I did have a little problem, which was the little piece that goes on top of the heavy bolter support fell off. Obviously not enough glue. This proved to be a right pain to try and glue back in, but eventually I managed to get it back in place - after some swearing! 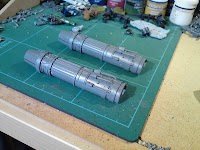 Next up, I got to work on the engines. At first I thought that the two separate top pieces for each engine were going to be a pain, but they fitted together quite nicely. 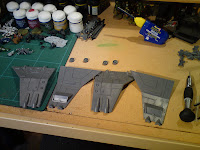 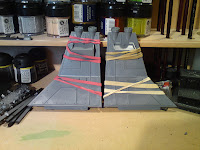 Finally came the wings. I chose to remove all the little rivets that are on the thrusters as they just didn't look right. So the first pic is all the bits laid out, while the second one shows them drying with the aid of some elastic bands.

The next stage will be to get the cockpit and pilot/co-pilot completed. Cheers for reading.
Posted by Cadian 127th at 20:25

I've painted the inside of one (just a spray of Tamiya "Sky"). The arms are in there, and I have the HB to fit. All the doors open on this one.

I might do one with the doors open and the HB gunners in place; But all the rest I'm going to glue the doors shut.

Oh oh oh ! But I did have a point, I just wandered a bit: Did you have to elastic band the parts together ? I found that laid flat, the contact was OK to not need clamping.

I've not glued the actual heavy bolter to the arm thing so that I can take them out and give them a coat of varnish. Also it allows me to reposition them inside the Valk.

I elastic banded the parts together just as an added measure. They were laid flat, but I stood them up for the photo. I think I may have to get some little clamps for future use.

Hey good too see you got some more work done. But is it my idea or is this taking you way too long?

My biggest mistake when putting the Valk together was gluing the wings to the hull. Not it doesn't fit anywhere and it's really hard to carry. Wish I had magnetised them instead...

@ The Antipope - yeah it is taking a bit of time. I can't seem to concentrate on completing a model. I'm quite annoyed that I haven't magentised the wings yet, I may have to find a way of doing it. If not I'll be buying some BattleFoam inserts as they do a Valyrie one which looks quite good.

Ah, I know what you mean. I haven't really done any painting in a month myshelf.

I haven't tried to magnetise any Valkyrie wings yet but I guess something like this :

plus a Dremel would to the trick.