Ride of the Valkyrie, Part 2

Time for an update on my continuing Valk construction project.

Things are progressing quite nicely, I think. I decided not to add any more detail to the interior. I think that the drybrushing does the job well enough and people seem to like it, so why mess with it.

My next task was to get the door gunners completed. This meant undercoating all the various components. I chose not to use spray paint for this and instead used the Foundation Undercoat Black, followed by a coat of Chaos Black. This gave the models more of a gloss finish which is what I wanted. Again I wanted to keep things simple, so I stuck with the drybrushing technique. 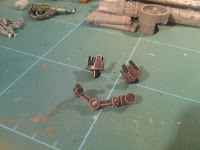 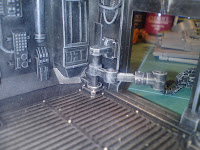 The above pic is one of the arm mounts and the swivel mounts. The other arm was already in place in the transport compartment. These pieces got the same drybrush as the interior, Codex Grey followed by Fortress Grey. And the other pic is how the other arm looks in the Valk itself. 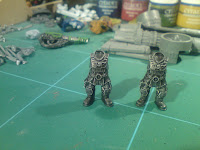 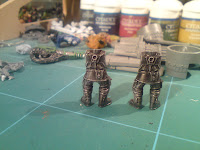 The gunners themselves got a slight variation. Rather than using Fortress Grey as the extreme drybrush, I went with Skull White, for a really bright layer. The pictures here don't really show it, but hopefully when I get the big camera out this will show up better. I thought about different colours for the uniform but I think the black flightsuits work well, and will also be used for the pilot/navigator when I get round to doing them. 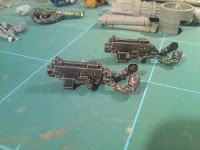 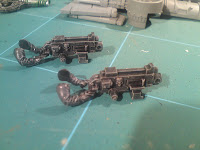 The arms got the same treatment as the gunner's bodies. I toyed with the idea of making the hands my usual flesh colour, but then figured that the crew would probably be wearing gloves. The heavy bolters got the Codex Grey/Fortress Grey drybrush. Again I was a little torn with what to do as all of my auxiliary weapons tend to be a bright green, but I decided to stick with the darker side this time. Painting them Dark Angels Green was also an option but I'm glad with how they turned out. 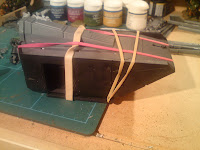 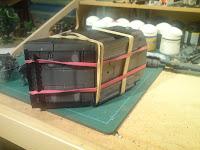 Now that the weapon mounts were done, I could finally glue my two transport compartment sections together. A little bit of glue and some elastic bands later and the back end was sitting waiting for the glue to dry.

The next stage is getting the engines ready and finishing of the tail sections before I tackle the wings. Thanks for reading!
Posted by Cadian 127th at 19:20

Good to see you've made some progress. Looking good so far.

Mine is sitting on my desk for a few days now and needs to be painted. But there is so much to the model I am afraid it will take me ages to complete it.