Hi all. Today's post is continuing on with the OO gauge model railway layout in my brother-in-law's garage. If you need to catch up on what's been done before, here's Part 1 and Part 2.

This update will be on making progress on the two incline sections and making them a little less plain. 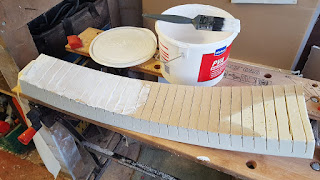 First thing was to get the curved sections glued so they would hold their shape. Copious amounts of PVA glue was used in the grooves and the curve held it's shape perfectly. 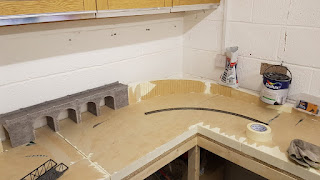 PVA was then used to attach the curve section to the base celotex. Random garage items come in handy to hold things in place. 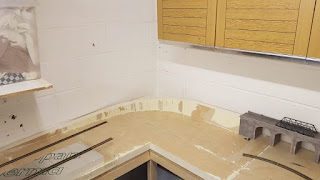 The same process was used for the other side. 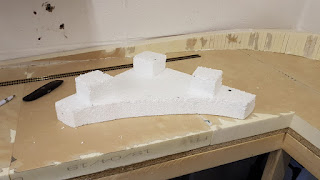 We also purchased a sheet of polystyrene and it got its first use in creating a section to fill behind the curve. PVA to attach the blocks and then a cordless jigsaw to cut the block. It's a little bit overkill but it cuts so smoothly and quickly. 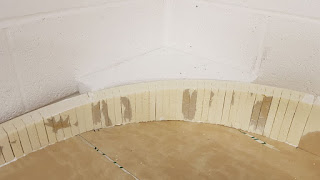 Pretty much a perfect fit. Glued down with PVA again. 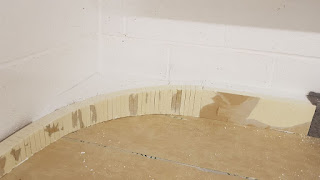 Filling the rest of the empty space was then a case of cutting some of the sheet off to the right shape and creating some pillars to support it. 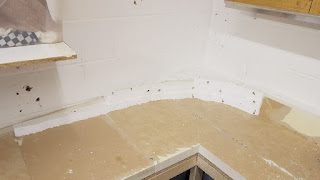 The inside of the curve was bit trickier to build up. Multiple pieces of curved cuts were used and attached using a combination of glue and screw. The descent was also gently shaped into a sloped bank. 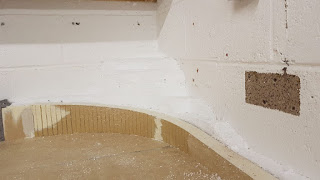 The right hand side has something a bit more elaborate going on - a nice little hill. 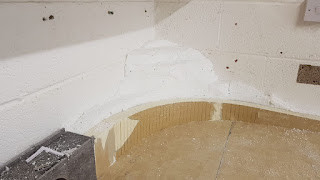 Multiple layers of polystyrene were used that were cut smaller each time. We made each layer a little smaller than necessary as we wanted to be able to fill the gaps without ending up with a sheer cliff face. 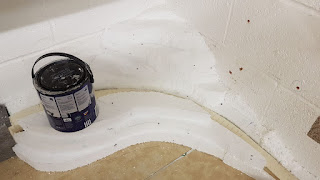 The inside of the curve also got some hill layers as well. 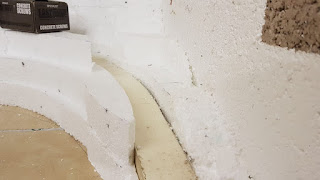 The inside curve was built up to look like the hill had been partially cut into for the track laying.. 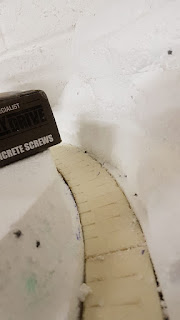 A little look up the line through the cutting. 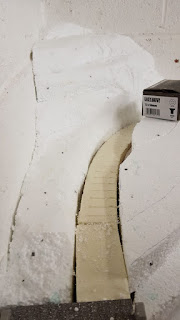 And a look back down the hill.

Next up will be to mix up some filler and cover all the polystyrene. We'll also be trying to use the filler to create some more natural looking landscape, rather than the Minecraft hills we have at the moment.

Thanks again for taking the time to read this.
Posted by Cadian 127th at 09:03

@ Siph - thanks, it's my brother-in-law with the pics and me with the words trying to keep up with what he's doing.