Hi all. Thanks for taking the time to read this.

Whilst my own projects slow down and mount up, I've been involved in assisting my brother-in-law with his own instead. And his project is a OO gauge model railway. 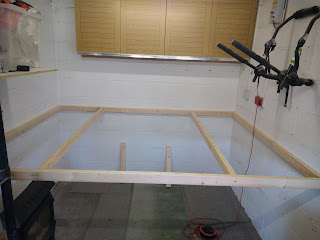 And here is where we began. The original plan was for a 8ft x 6ft layout. The framework was attached to the walls. However, we decided to add another foot and make it 8x7. Unfortunately the cross beam was already in place so some extra struts were used instead. 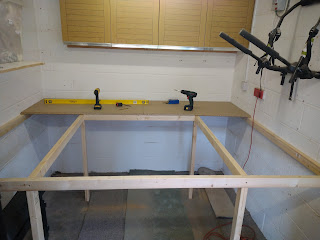 For support, 4 legs were added around where the centre well will be. The legs were attached to the floor to provide some extra stability. 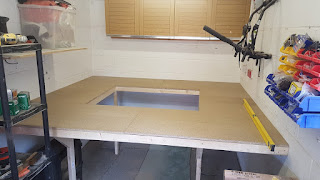 The whole frame was then covered using loft board. These boards are pre cut and slot together which meant minimal cutting and ease of construction. You can probably just make out the overhang created when we added more space to the layout. 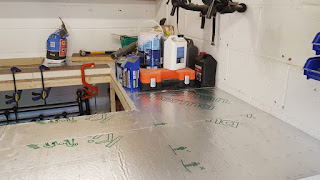 Next up was to cover the whole board with 50mm thick Celotex. Celotex is an insulation material used in construction but it is also very good for making scenery. 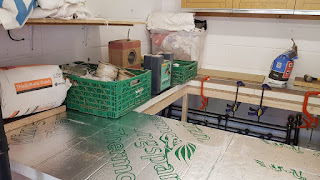 The Celotex was glued to the board using copious amounts of PVA. 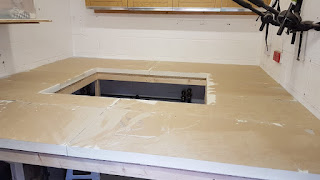 We removed all of the aluminium foil so that the Celotex can be cut into and shaped. The plan is to add a river in centre of the layout at the back. 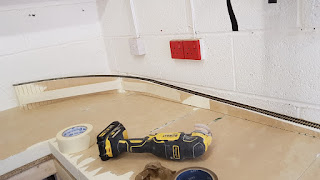 With Celotex being strong but easy to cut, it is also very useful for building the gradient for the track. 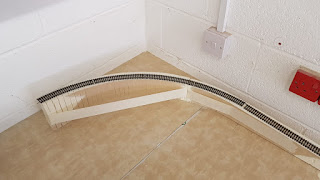 To curve the material, grooves were cut 75% of the way through the width at 20mm intervals. This was done using a jigsaw, which made it really quick and kept the cuts consistent. We then used tape to hold the curve in place before we glue it at a later date. 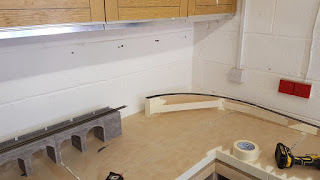 And the purpose of the incline is to join up with the viaduct that will be across the river. The viaduct is a Metcalfe card kit, and again these kits are awesome.

And that is as far as we've got so far.

There will only be two loops of track on this layout due to the size constraints and not wanting to just chuck down a load of track. There will be a couple of areas, including a town and a main station.

There are a lot of similarities between our hobby and model railway hobbies, I find this interesting, looking forward to the next progress update.

@ Siph - skills from our hobby have come in very useful. Especially weathering techniques. Next up will be the other part of the incline and possibly the river.