Hello all and thanks for dropping by! This is post number 200!!!!!
It has taken a bit longer to get here than I thought it would, but I was far less involved in the hobby last year than I expected to be. 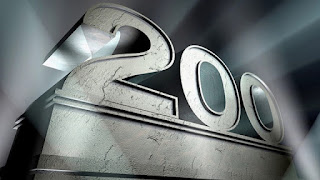 Thank you all for continuing to read/view the unpainted models I continue to release on the unsuspecting internet. One day they will be painted. And thank you for the comments, ideas and suggestions you post, they really are helpful and encouraging.

Anyway onto some infantry! I started collecting Imperial Guard because I liked how they appeared to be a futuristic version of current/recent armies. The right combination of lots of tanks, lots of planes and lots of infantry!

My infantry numbers have sat at a steady 80ish for a bit too long though. I've tried getting going on squads to bulk this out but with such a long time having passed, it was time to take stock instead.

And this is what I've come up with: 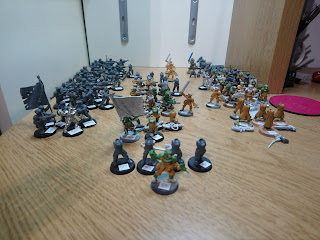 Quite a few guys really....and this is how that all breaks down: 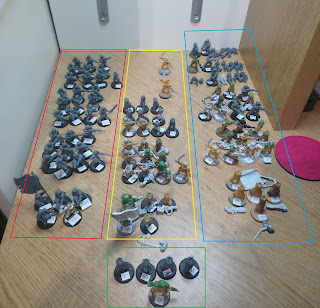 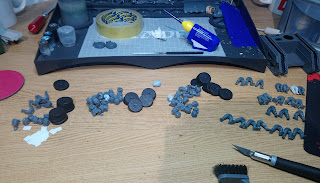 As well as the 3 squads for Platoon 5, I've also got 23 more pairs of legs which are on the right of the pic above. These will flesh out Platoon 1's depleted squads.

In total that makes 158 (yes 158!) more infantry! I don't know when I'll get round to painting them all but here's hoping. This gives me around 230 guardsmen ready to take to the field with a Regimental Command Squad in charge of 5 platoons (plus the odd heavy weapon as well)!

So I'm going to get busy cleaning mould lines off and gluing things together.

Thanks again for dropping by and see you all soon!
Posted by Cadian 127th at 16:50