Hello and thanks for stopping by. Today in the fun of a British winter, where clear skies turn to snow and then torrential rain, I made a quick trip to Warhammer World on the way back home. This was a planned trip and I had planned on spending some money..... 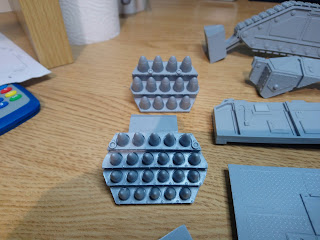 Missiley death kind of money. As a present for completing a year long vocational training course, my wife bought me a Praetor Armoured Assault Launcher - click here for the ForgeWorld link.

I had spent quite a bit of time trying to figure out which kit I would like and we both decided on this one. 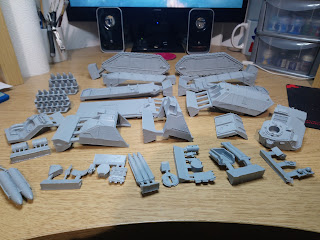 All the pieces laid out. This is an all resin kit and having had a quick once over, there doesn't seem to be any major flaws. 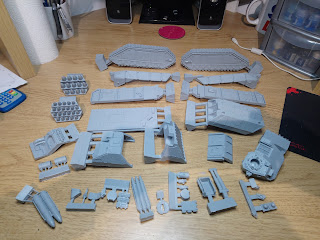 There are some chunky bits of resin in the kit and the sides are quite blank which could lend themselves to some nice camo design. I'm hoping I can magnetise the different missile load outs as well and maybe the front heavy bolters.

Unfortunately the Praetor was the only thing I ended up buying as I've got way too much to finish to really invest in more. I did want a Marauder bomber/destroyer and the Acastus Knight Porphyrion and the Stormhammer but those will have to wait a while.

Thanks again for dropping by and don't hold your breath for this one to be finished anytime soon!
Posted by Cadian 127th at 18:38

It’s a beauty of a vehicle, good choice

Awesome! I always loved the Praetor, looking forward to seeing it come together!

Thanks for the comments everyone!

@ Siph - it is a nice bit of resin, hopefully I can do it justice.

@ Zzzzzz - cheers, some way to go before my army rivals yours!

@ Mordian7th - the design really stands out, now to build it!