187 - Somewhere to Store the Trains

Hi all and thanks for dropping by again. I've been back at my parents' house for my dad's birthday and we've been fettling with the train set in the garage again. There have been several additions and changes since the last post so read on for more. 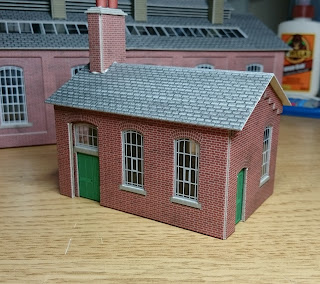 First up are a few new buildings courtesy of Metcalfe. The workshop above and the building in the background are from the PO213 Engine Shed kit. The buildings are made from sturdy card and the windows are clear plastic. The instructions weren't too bad to follow although there were a few moments when I had to double check before gluing. 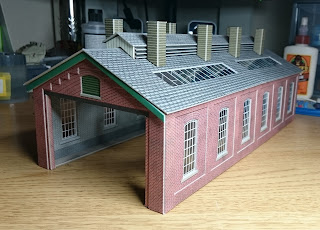 The engine shed really is the main attraction and the whole reason I grabbed the kit. This one will replace the mismatched sheds in the marshalling yard. The big side windows and the roof windows really let you show off what's inside from above and eye level. The louvered roof vent was one of the more challenging parts as it had several layers of different card widths to get the effect. Everything was glued in using Gorilla Wood Glue and held together using a combination of magnets, paperclips and heavy objects while the glue set. 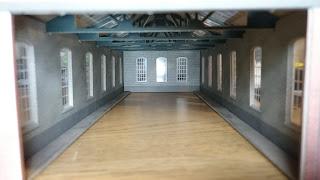 Here is the inside of the shed which shows the very nice roof girders and windows. The interior has printed detail as well (something the workshop doesn't have). 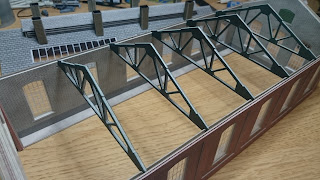 Both the roof for the engine shed and the workshop have been left off so lighting can be added in the future. With the roof being removable, any derailments inside can be dealt with more easily, plus look at the roof supports! 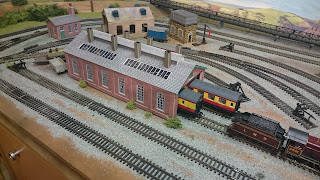 Some rearranging of the marshalling yard was required to get the engine shed to fit. The double track had to be repositioned but it was flexi track so wasn't too much work. Some of the track had to be cut off at the end as the new shed has a back wall. It does look quite impressive and a bit more detailed than the Hornby buildings in the background. 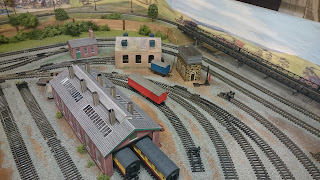 The little workshop has just been placed randomly as there is some upgrading to be done to the marshalling yard which may involve the removal of one line of track. 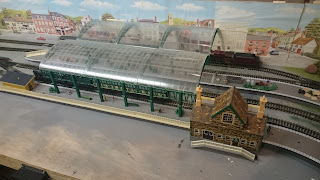 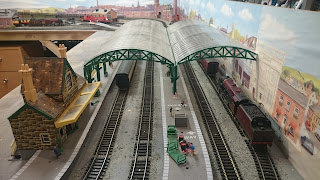 The second canopies were cut down to fit and make the station seem a bit grander. 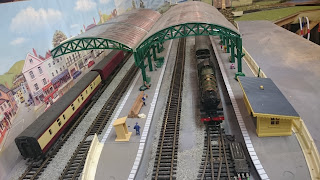 When scrutinised, the background scene and canopy don't really blend with each other, but from eye level it works well enough. 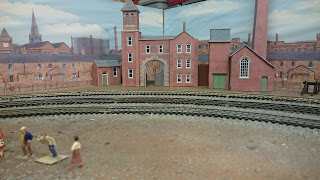 While I had been building the engine shed, my brother-in-law had been building another kit - the Boiler House and Factory Entrance (PO284). It is a very impressive and tall collection of buildings to go in the rather sparse section in the far corner. 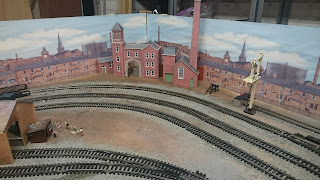 We are still trying to get the placement of the buildings right so this layout may change. The blank area between the three track lines and the points needs some work and we've spied a loading bay to replace the one on the left. 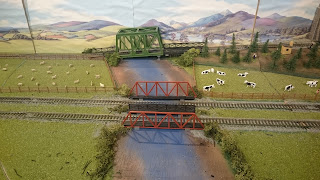 The swing out section got its last additions for the moment as well. The girder bridge in the background received some track railings on either side to complete it. The double track in the foreground finally got a bridge to cross the river, but we need to paint in between the tracks. Some moss was used to line the banks to finish off the river. 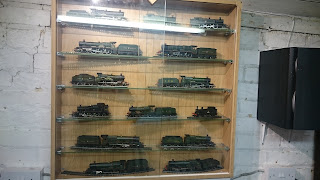 And we finally filled the second glass cabinet. These are all mint condition GWR and British Rail and most of them have never been run.

Unfortunately, this wonderfully designed cabinet from a well known high street retailer that sells many things (including cheap jewellery) did not like the conditions in the garage. Before we started on anything on Saturday morning, we had to clear up the carnage that had occurred! The cabinet had sagged in the middle and the two rather heavy glass doors had fallen out and wreaked havoc upon the marshalling yard. Everything in the yard had been knocked over and with the force of a scale nuclear weapon - fortunately no damage here.

However, the InterCity which had been owned by my brother-in-law for over 20 years was decimated. One carriage and the false locomotive survived unscathed, but the rest of the train was not so lucky. Two carriages were almost completely split in half and went straight in the bin and the locomotive was smashed in to several pieces. Somehow though, the locomotive's body shell survived intact and we may be able to salvage it. "What about the glass doors?" I hear you ask - well they came through utterly undamaged!

We spent some time fixing the cabinet so the doors won't fall out again (hopefully) and then had to do some tidy up before cracking on with the above work.

So we had a mixed weekend really, carnage followed by progress. Oh and we also managed to trip the electrics whilst putting up another spotlight bar - even with the breaker turned off in the garage - got to love 100 year old electrics!

Do be careful with the 'leccy.

Erm, the best thing I could think of, off the top of my head, is 'nail them shut'. Whilst preventing further fall out, does sort of prevent you from accessing the trains.

We cut some small wood triangles and screwed them to the top corners and middle. They are holding nicely - so far!