In the pile of unbuilt models, I've had a Baneblade kit sat staring accusingly at me for a while. I have a plan for this kit though and bought the sponson sprue from GW as I wanted to make this a proper heavy hitting Hellhammer with 2 sponsons on each side. 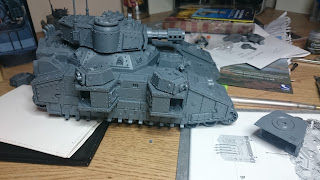 Having built the main body of the tank, I blu tac'd the sponsons together to see how the tank would look, and it looks pretty good. My plan is to have one set facing forward and one facing backwards as shown above. Good plan I thought, but this still leaves an area that cannot be covered by the twin linked weapons. So the next idea was to turn this Hellhammer in to a hybrid Hellhammer/Stormhammer.

So I wanted to create a massive weapons bank that looks like my crappy picture above. This would be 3 top mounted turret lascannons and 3 sponson mounted twin linked heavy bolters or heavy flamers (9 weapons per side!). This seems to be a bit of overkill in my opinion and that central lascannon turret would be more of a hindrance than help.

Rather than cracking on and chopping up bits of plastic card or the current sponsons, I grabbed some card I had from the glass doors I had recently put on my shelves and measured up the space. 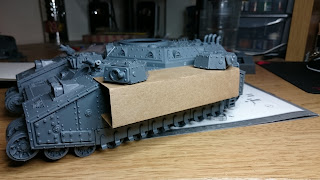 Once the card was measured and cut out, I scored along the fold lines and put in place. Please bear in mind this is a very rough design. A bit of blu tac is holding it in place and I placed the turrets on top just to see how it looks. 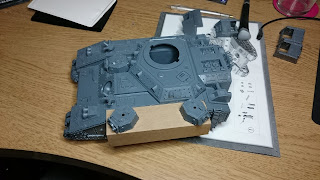 From the top view I don't think I would have been able to squeeze the third turret on. I may nudge the turrets closer together and see how they look, but at the moment they have really good fields of fire.

I will still be sticking with the 3 sets of twin linked weapons and need to work out their fields of fire. I'll probably do this by using the physical weapons and swizzling them around. I definitely know I'll have to build gun shields for the middle weapons but this can wait.

Thanks for reading and stay tuned for further updates.
Posted by Cadian 127th at 22:14

Have you thought about three single weapons instead of twinlinked? Using the heavy bolters from a LR tank instead would fit better, and would be more reasonable as well as more in keeping with the Epic versions.

@ Lasgunpacker - I haven't considered switching to three single weapons. I had grabbed a single heavy bolter to try in the middle, but I'll give the three singles a go. Thanks for the idea!