I'll start by saying this is a text heavy post, and thanking you in advance for reading.

Everyone has their reasons for getting into model making/gaming. Some times it's friends, other times it's a progression from other hobbies. I got into Warhammer after a friend at Secondary school showed me some of the models. But I already had the hobby bug before then.
I'd caught the bug from my dad. I'd always liked LEGO, K-Nex and Meccano (occasionally) but as I got a bit older I started to get model kits as presents and as treats when going to air shows - Duxford and Biggin Hill are pretty close to where I used to live. My dad had been collecting, building and painting models for many years before I came along and the end of the garage was dedicated to his kits and OO gauge train collection. And this is really where the interest for me came. I'd spend hours in the garage or conservatory building and painting and looking at his finished, unfinished and boxed kits - eagerly trying to get my hands on some of them!

One of the main features of the garage was that the end section (approx 2-3m square) was separate from the rest of the building. In this square were my dad's collection of Hornby trains, including a nice twin loop layout. Unfortunately, 12 years ago my dad suffered what can simply be described as a massive stroke (or subarachnoid hemorrhage caused by cavernous haemangioma - not fun reading).

After being rushed to A&E, the prognosis was grim with a slim chance he would make it through to the next day. Well my dad is a bit of stubborn person and defied that diagnosis. Instead he spent the best part of 6 months in two different hospitals, across critical care and acute stroke wards, receiving treatment and therapy.

The stroke did leave him disabled. His vision was affected and continues to alter, he has no sensation down the left side of his body, his balance and walking ability are diminished and his fine motor skills on his left side are greatly reduced. All of this means of course that he can no longer build or paint models or use his trains - hobbies that he had enjoyed for over 40 years.

What followed was a selling off of some kits and a boxing up and storage of others. At one stage my dad owned over 100 Hornby OO gauge locomotives, many of which were still boxed. Since the models were packed away, my parents have moved house a couple of times with the boxed models making the trip with them.

This year my dad turns 70 and myself and my brother-in-law felt that it was about time that he had a chance to use the trains that he had collected and to get involved with the hobby he used to enjoy. My parents current house has a nice large garage, which is about 3.5m wide and 5m long.

Now anyone that has a garage will probably have suffered the age old problem of filling it full of useless crap. My parents garage is a prime example of this. So our first task was to clear the garage out (of stuff, spiders (many, many spiders) and vegetation) and then get to work.

With the garage cleared out, we could get cracking. The plan was to build a 10ft by 8ft (sorry for the switch to ft) table with 2ft deep sides on three sides and a 3ft deep side on the remaining side. This would allow for a void in the middle for my dad to stand. We also had to design a way for him to get into and out of the void - crawling underneath wasn't exactly an option. The table also had to be high enough for him to use easily and sturdy enough to support someone leaning on it occasionally.

So here are the results: 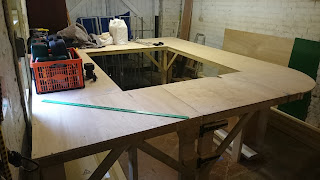 At the very front of this picture is the door section (the hinges give it away). You can see how much space the table takes up in the garage. There was one condition when we built this, the dark wooden cabinet on the left had to stay. This limited our build a little but nothing we couldn't handle. 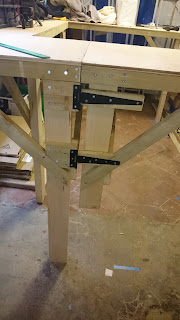 Here you can see a bit more of the hinge section as well as some of the leg supports. The top of the table is chipboard and the legs are 4x2 rafters supported with 2x1 lath. Lath was also used along the underside of the chipboard to provide strength (sorry no pics at the moment). 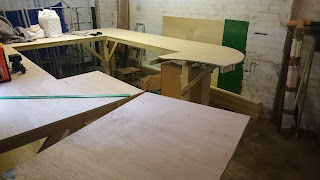 The idea was to over engineer as much as we could. We had plenty of wood available for legs and eventually there will be storage underneath. You can see in the picture above the supports protruding from under the chipboard to rest the swing out section on. 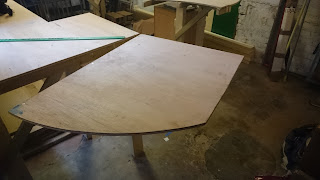 Here is the swing out section fully open. The hinges are strong enough that this shouldn't drop in the short time it will be in this position. We also added lath edging underneath this piece so that my dad has something chunky to hold on to close it. 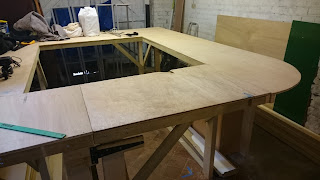 The fit is very, very tight. We did sand the edges down to make it a bit smoother closing and there has been bracing added to the support legs to make sure the pieces don't move apart or closer. There will also be a securing bolt on the side and a clasp on the top to pull the sections together in order to allow the trains to pass over the inevitable gap in the tracks.

At this stage we'd spent about 15 hours on it, used several hundred screws and broke one drill bit. My parents live over 100 miles away, so there will be more trips to get this table and layout into something my dad can enjoy using.

Thank you for reading and please stay tuned for more about this project.
Posted by Cadian 127th at 22:15

That's a wonderful gift to give your father. Look forward to the future progress! Would suggest, that if he has trouble standing too long unassisted, that you setup a braced rail on the edges that can support full body weight, without putting any stress on the table itself.

In a lot of ways.

@ Greg - thanks, it's the least we can do for him. He's going to have a perching stool in there as well but we may investigate the rail brace. Stay tuned for another update this week.

@ Zzzzzz - cheers, hopefully it will turn out alright...