Well one of the Manticores is finished! And it wasn't the one that I'd started on ages ago. I've actually finished off the one from eBay. It's amazing how long it takes me to complete things sometimes - maybe my New Year's resolution should be to try to finish projects quicker? No chance! 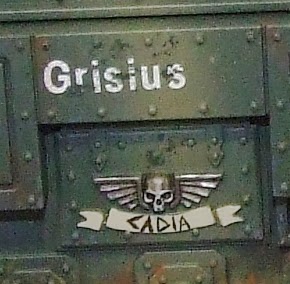 Instead of outwardly trying to finish projects quicker, I'm going to try and keep my focus on one at a time. This should mean they get finished sooner rather than later, but I won't get so stressed about having a completion time. Anyway enough of my modelling epiphany, time for some pictures. 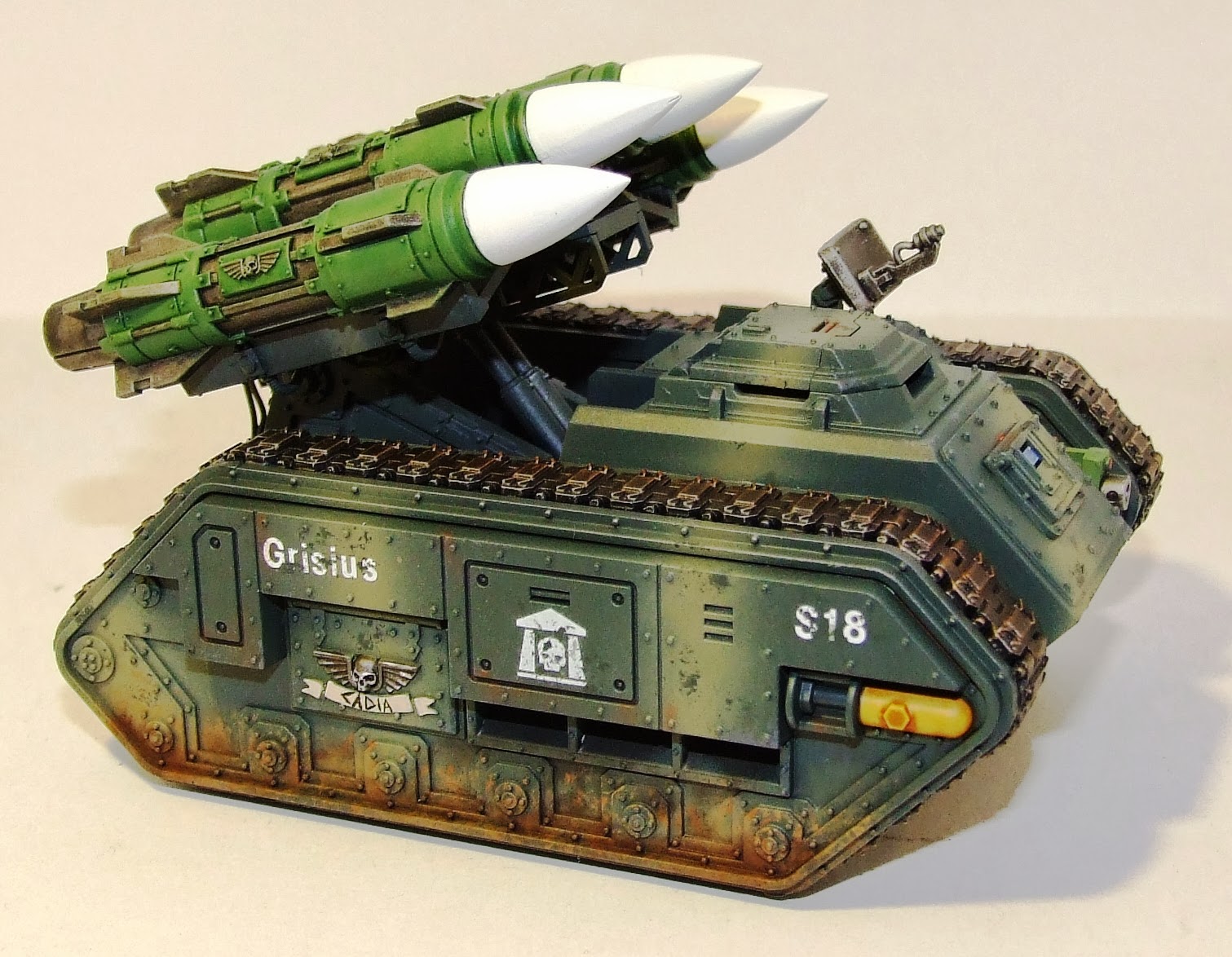 So here is S18 "Grisius" (Latin for Grey (apparently)). The transfers were a combination of waterslide ones from the Cadian infantry sheet and the rub on transfers that I tried out on my two Chimeras, from Letraset. 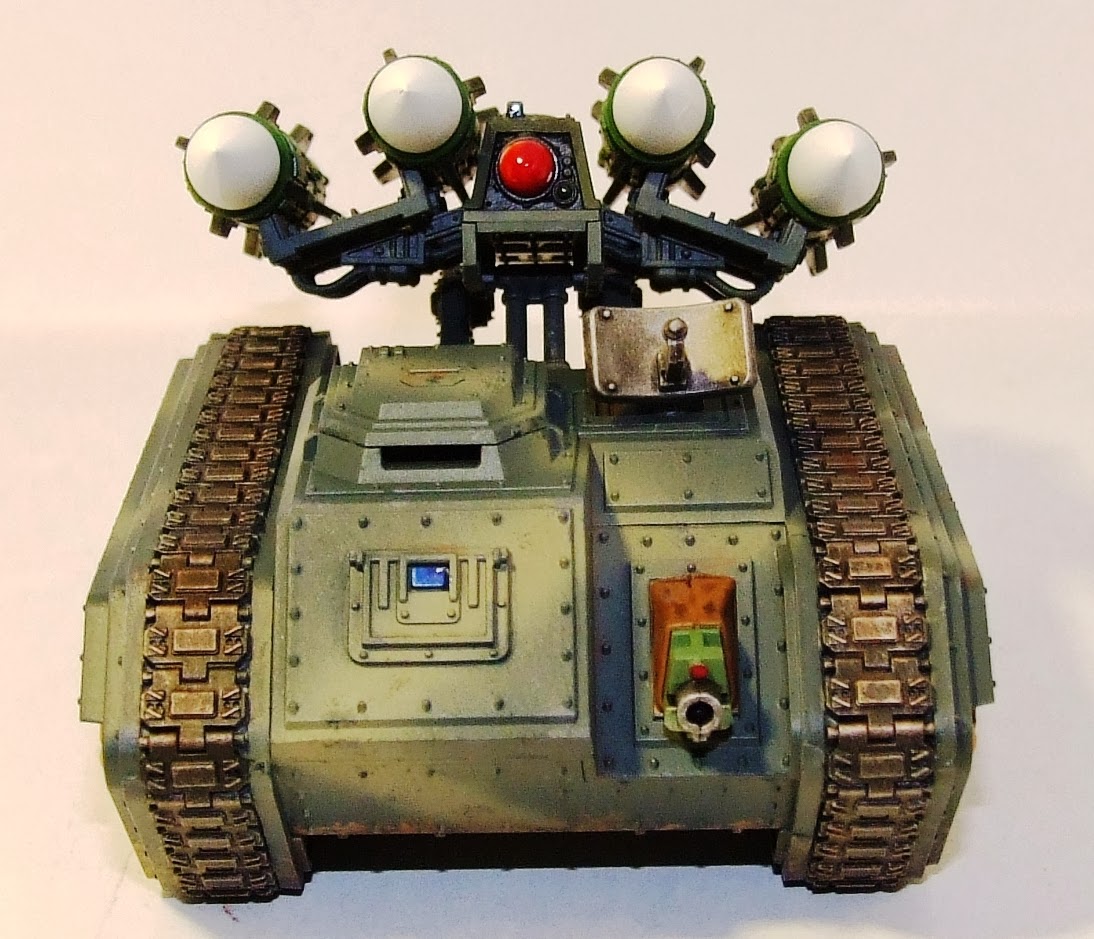 A nice frontal shot. I went quite low key with the weathering on here. Only a bit of sponge damage and a small amount of rust. You do get a nice view of the targeting array though. 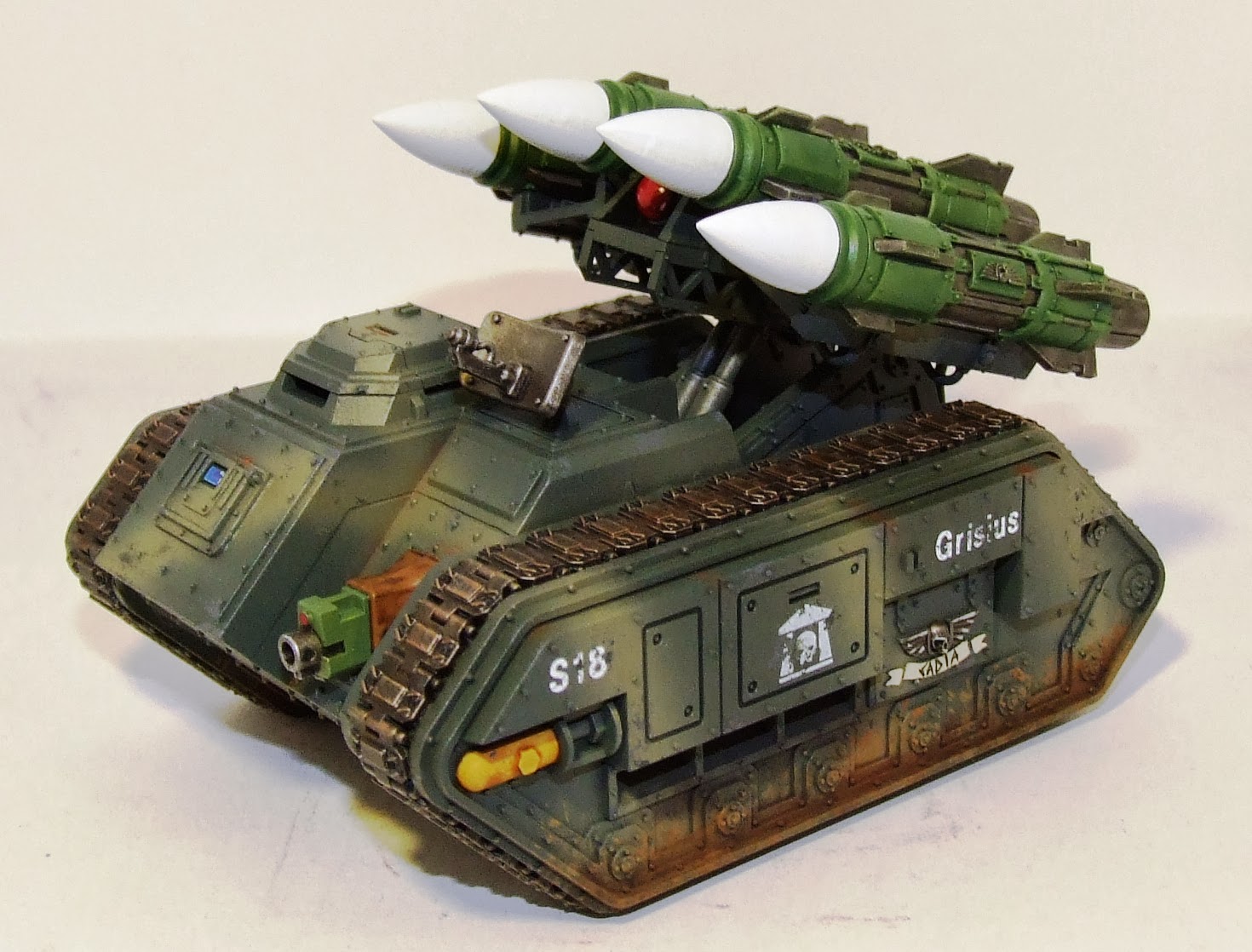 I used my usual technique of sponging on some of the camo basecoat colour over the camo stripes and transfers. I also sponged on some grey to represent the camo peeling off. The yellow area was painted with  GW Iyunden Darksun, followed by a wash of GW Gryphonne Sepia. 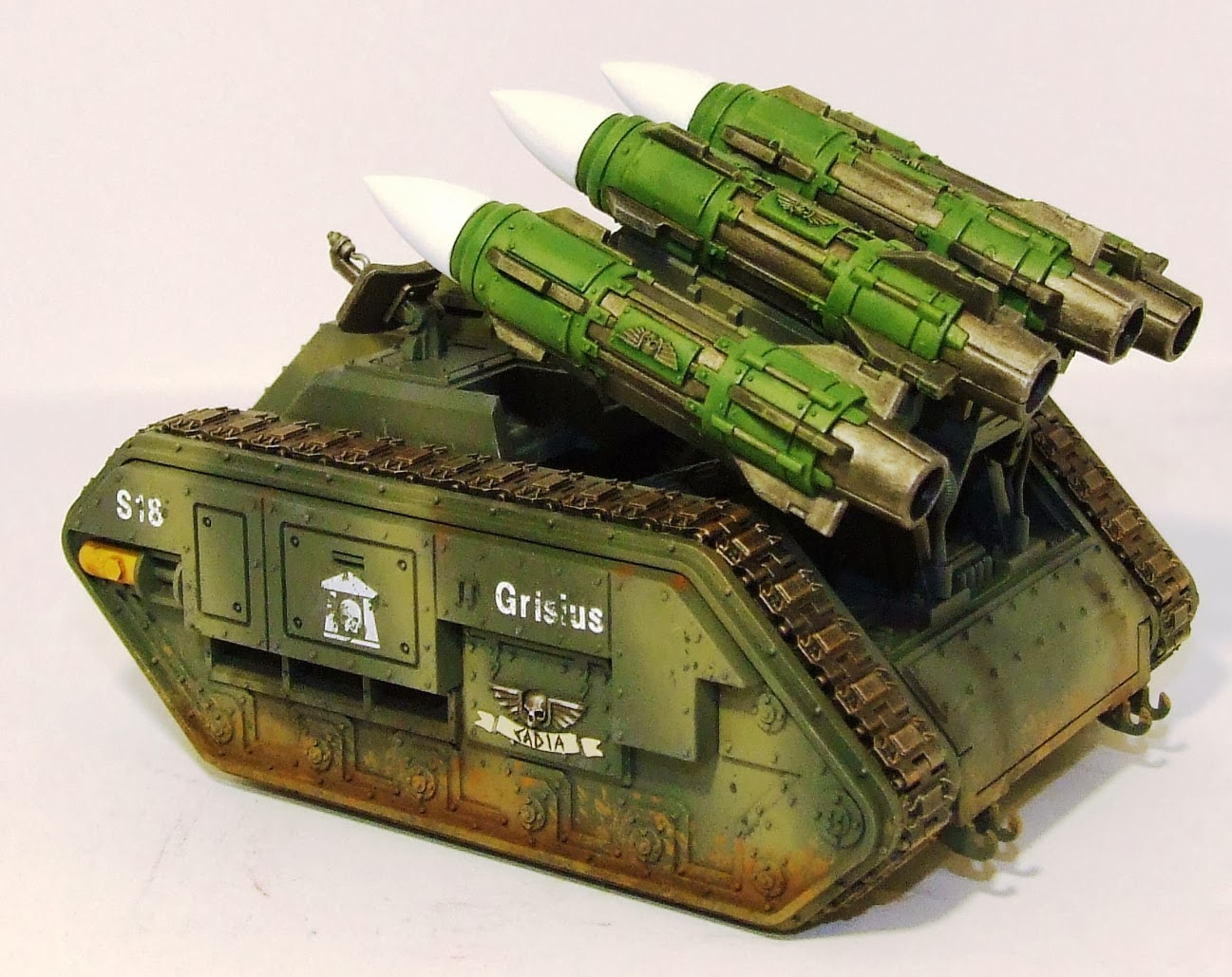 Not sure what happened with the colours on this photo. The mud weathering was done with some heavy stippling of GW Graveyard Earth, then a lighter stippling of GW Calthan Brown. When that had dried I added some ForgeWorld weathering powders, starting with Dark Earth and then finishing with some Light Earth. 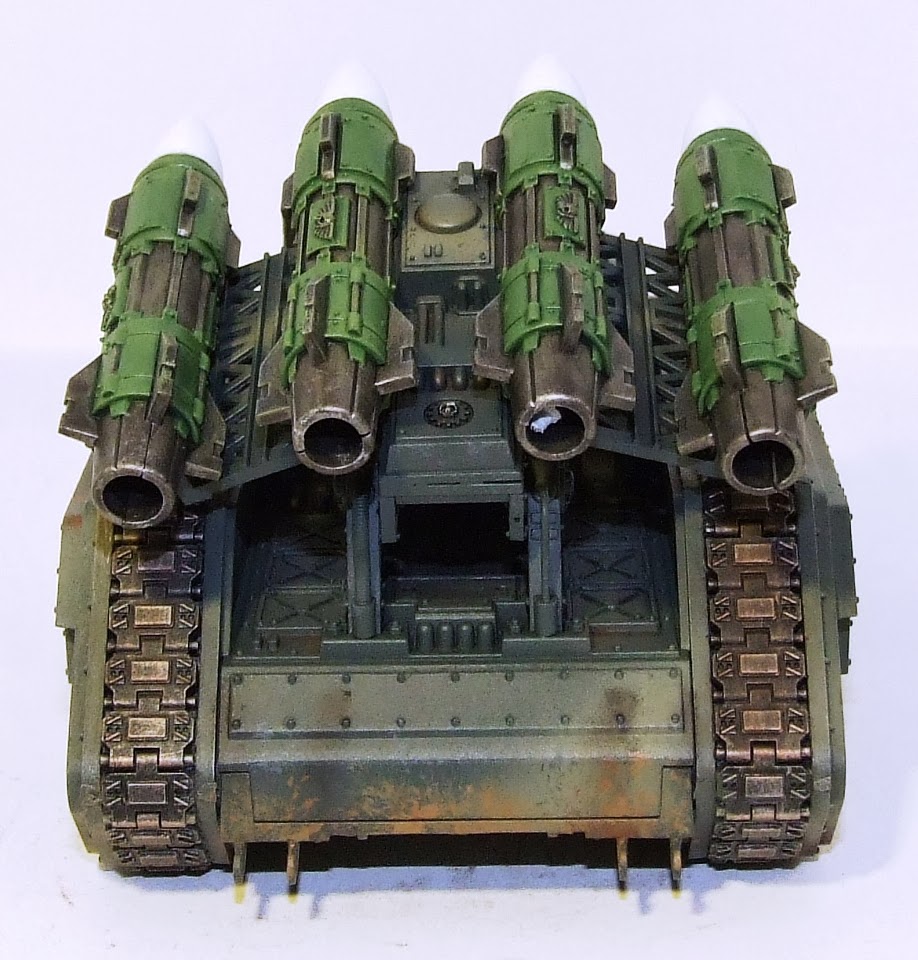 I noticed after taking these photos that I'd left some blu tac in the missile exhaust. Oops! Anyway, I carried on with the mud weathering on the back. I also used some Black Soot weathering powder on the back to simulate scorch marks from the missiles being fired. 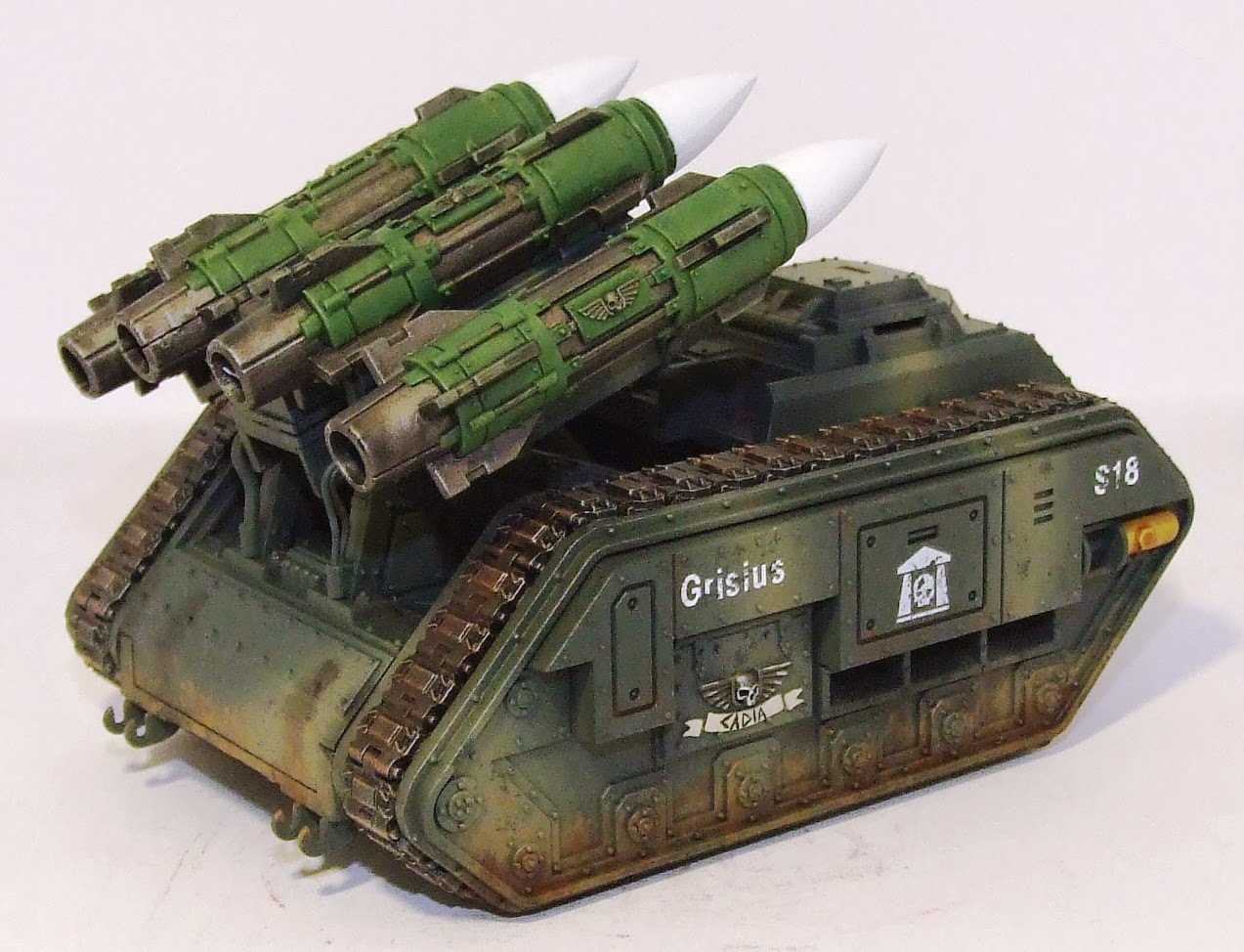 I also used the Black Soot powder on the engine vents. I tried to angle the exhaust stains towards the back of the vehicle and down as well. Unlike some of my other tanks, I didn't add too much in the way of rust. There are a few spots around the Manticore, with an odd streak as well. 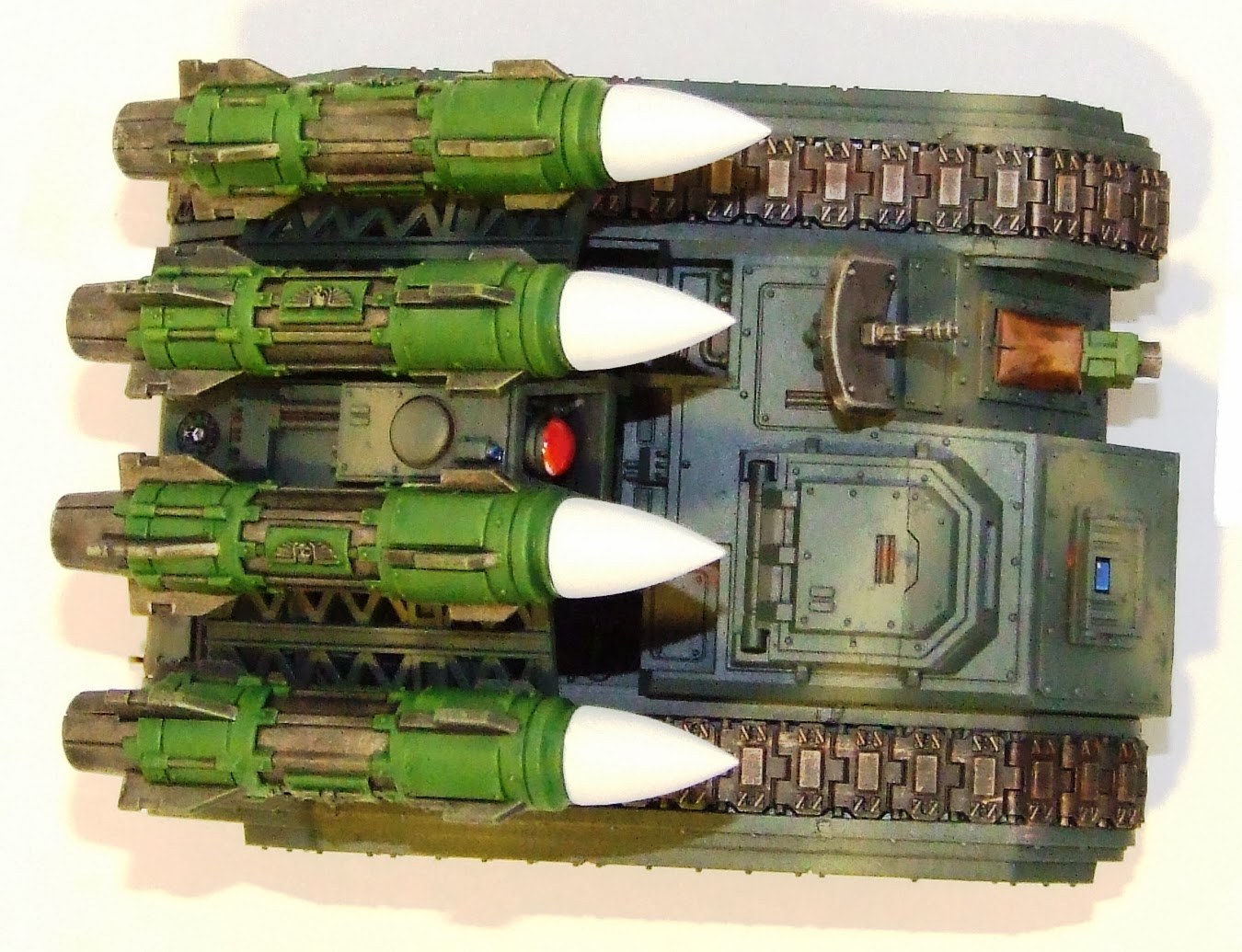 This shot gives you a better view of the missiles themselves. The warhead was painted GW Ceramite White over a Vallejo Grey base. The green is GW Knarloc Green, with a wash of GW Thraka Green, followed by a drybrush of GW Elysian Green. All of the metal areas were painted with GW Leadbelcher. This was then washed with GW Badab Black and then got a drybrush of GW Mithril Silver. Only now do I realise how many of the old paints and washes are still in my hobby drawers. 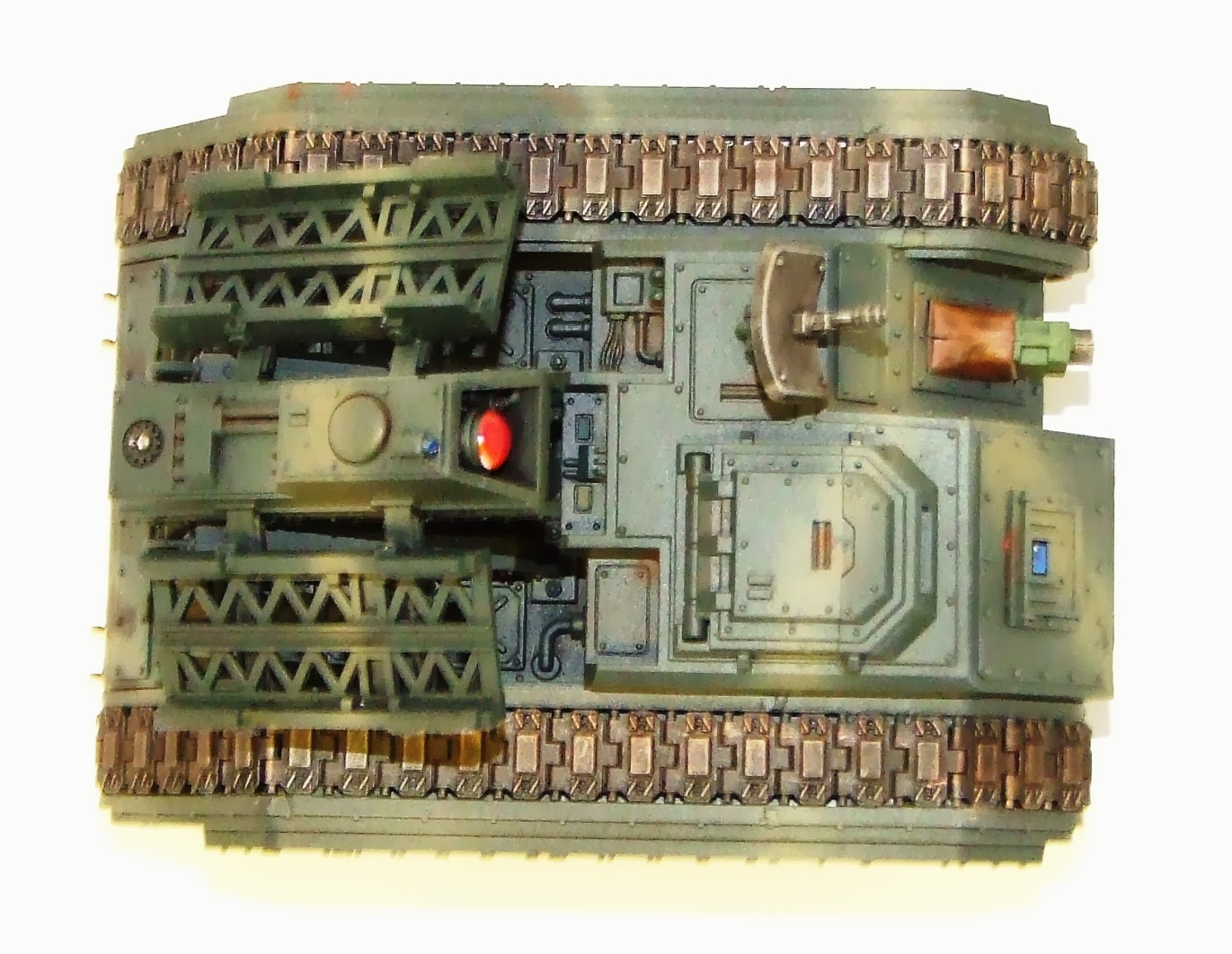 Top view, without the missiles

I've not glued the missiles in place yet and I'm unsure if I will or not. They stay on ok, but do tend to fall off if the tank is moved more than an inch. I may just use some blu tac (from the missile exhaust) and secure them on. At least in this view you can get a good look at the camo pattern. 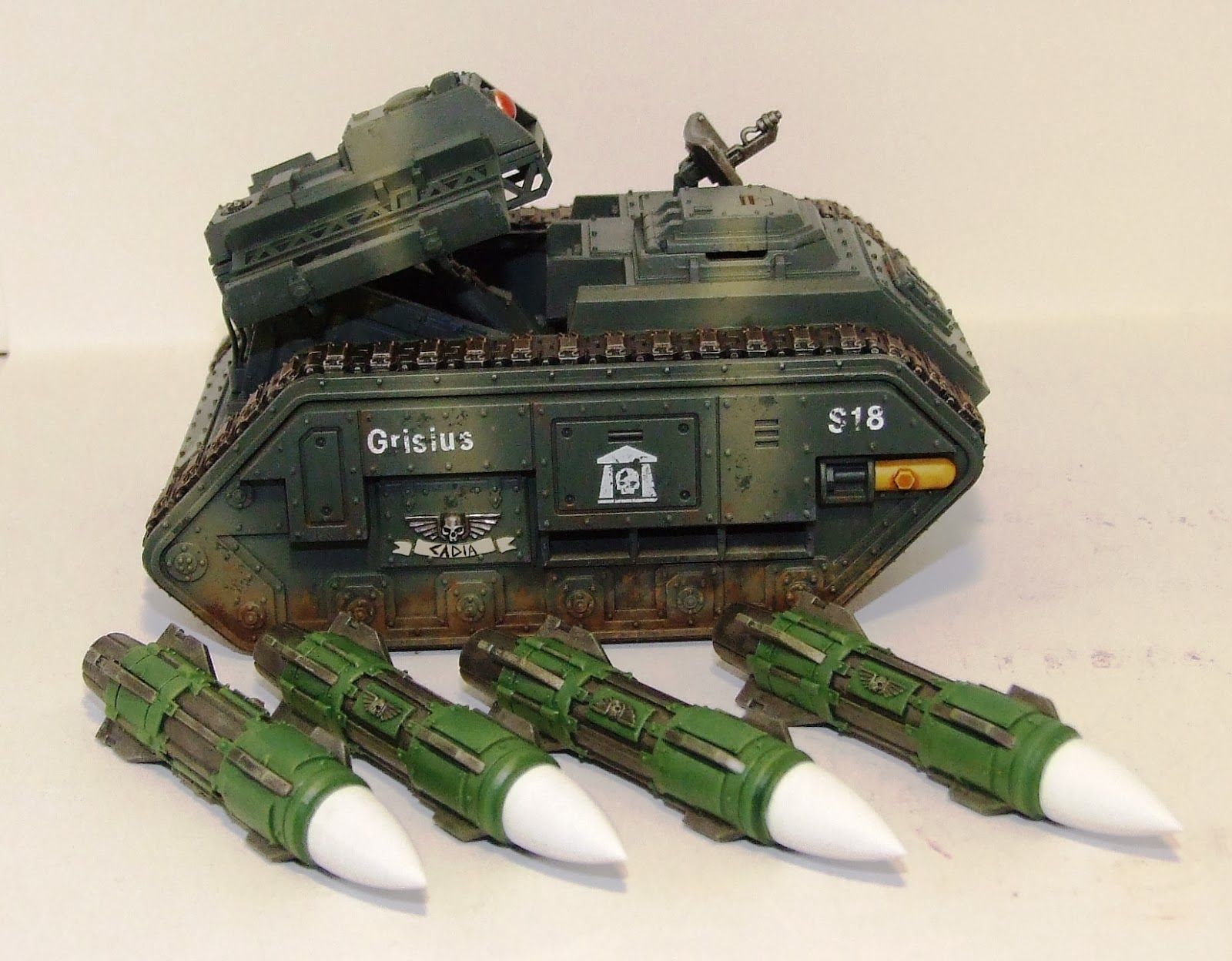 Finally, here is a nice little picture showing the side of the tank with the missiles laid out.

Thanks for reading. The other Manticore will be a two-parter, as it was a bit more complicated than this one.

I like that. I like that the missiles don't match the vehicle and the weathering on the decals.

And the pondering about a philosophy for approaching projects.

@ Zzzzzz - thanks for the comment. I still don't like doing weathering - always think I've not done enough or overdone it!

@ Chris - thanks for commenting. THe missiles are now held in place by that little bit of blu tac :)

Ditto on the weathering - I tend to overdo it but that gets the balance just right.

@ Col. Scipio - thanks for the comment. I guess it's just when the person doing the weathering is happy, if they are then it's all good.