Another update on the Chimera's. But fear not, as they are nearly battle ready. 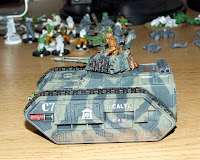 With the weapons and stowage completed, it was now time for some drybrushing. I toyed with the idea of going over all of the tank with a drybrush of GW Bleached Bone, and decided on just going for a light cover. It picks out the details quite nicely and adds a little bit of depth to the tanks.

I also added my "mud" to the lower parts of the Chimera's. This was done by stippling on GW Calthan Brown, followed by a heavy drybrush of GW Steel Legion Drab, and then finished with a light stippling of GW Baneblade Brown. 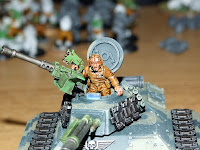 The tank commander was completed as well. I did run in to an issue with the heavy stubber, but that has been solved and it's position is now final.

I'll be giving both tank's a couple of light coats of varnish in the morning, before the pigments are applied. I'm not going to go as heavy on the pigments as I did with the Shadowsword, but I want them to have a little bit more wear and tear.

Looks great. The mud and dry brushing look spot on.

The names are great too...

Thanks for the comments guys. Now to come up with some names for the next batch!